A guy walks down the street, feeling totally normal—when he suddenly clutches his chest and collapses.

That’s how heart attacks in men are usually portrayed in movies, but it doesn’t always work that way in real life.

Although heart attacks can occur without any warning, that scenario is way less common than you think. Common heart attacks generally come with warning signs.

“Most patients do have symptoms prior to their heart attacks,” says James Park, M.D., FACC, director of the Heart and Vascular Program at Texas Health Dallas. “It’s just that sometimes, men will ignore the symptoms or chalk it up to some other malady.” (Here’s what a heart attack really feels like, according to six real guys who had one).

Think about it: If you felt overwhelming chest discomfort chances are you’ll get it checked out. But it’s easy to blow off more subtle symptoms of a heart problem.

In the U.S., the number of heart disease-related deaths increased to 840,678 in 2016 from 836,546 in 2015. This jump is attributed to updated guidelines for high blood pressure which lowered the reading to 130/80 mm Hg, from the previous reading of 140/90 mm Hg. High blood pressure is a big risk factor of cardiovascular disease and heart attacks.

This is why it’s vital to take unusual signs seriously– you can catch a heart attack before it happens.

Here are seven unexpected cues to watch for, plus what you should do if you have them. 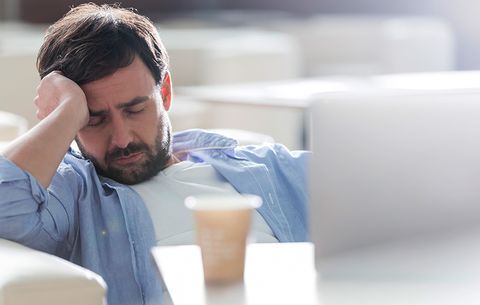 If your day-to-day routines or workouts suddenly seem unusually hard—or you’re too worn out to do your normal tasks altogether, it’s time to visit the doctor, says Robert Segal, M.D., FAAC, founder of Manhattan Cardiology.

Feeling extra tired can signal weakness of the left ventricle of your heart, the main muscle responsible for pumping blood from the heart to the rest of the body, says Segal. If it stops working, the heart isn’t able to pump properly, which can result in a heart attack.

And if the left ventricle isn’t pumping as strongly as should be, your heart might not be able to circulate enough blood throughout your body, or to fill up properly with fresh blood in between heartbeats. To compensate, the body diverts blood away from muscles and sends it to more vital organs like the heart and brain, according to the American Heart Association. This will leave you exhausted—even after a full night’s sleep, since your tissues aren’t getting enough fresh, oxygenated blood. 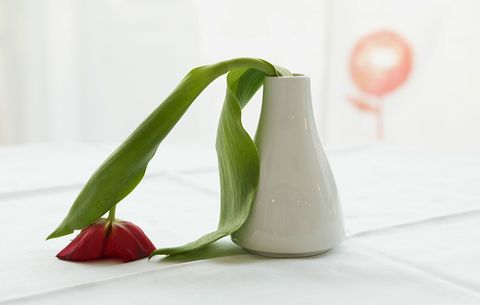 Erections occur when more blood flows into your penis, making it firm and hard. But if those blood vessels are damaged, blood flows less freely, meaning you’re less likely to get an erection, or maintain an erection, when aroused. That’s a main cause of erectile dysfunction.

As Segal explains, if your blood vessels down there are damaged, there’s a good chance the ones near your heart could be damaged as well.

A major cause of this blood vessel damage is plaque buildup. When that occurs in the vessels to your heart, you could be at risk of a heart attack, he says.

Having a one-time performance problem isn’t likely a big deal—it could just mean you’re tired or stressed. But if the issue persists after a few sessions in the sack, it could be a sign of something more serious.

Sign of potential heart attack: Your leg or hip cramps up when you walk 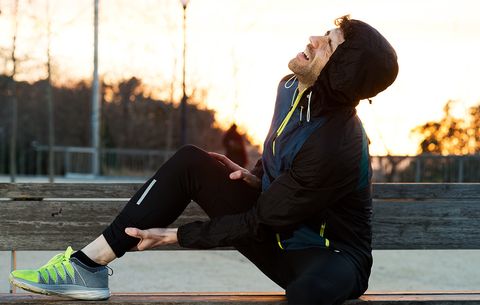 A cramping or burning sensation in your calves that slowly moves up to your thighs and hips could be bad news. It’s a common sign of peripheral artery disease—a narrowing of the arteries that limits blood flow to your limbs, stomach, and head.

That discomfort is caused when not enough blood flows through your legs. “Most patients will admit to not being able to walk normal distances without symptoms, or having to stop to rest before they can walk again without symptoms,” says Park.

This discomfort could mean your heart is at-risk for potential problems, too. PAD is similar to coronary artery disease, where plaque builds up around the heart’s major blood vessels. So the plaque buildup that contributes to the narrowing of your arteries in your limbs may also be occurring in arteries by your heart, too, according to the Mayo Clinic.

And that buildup can significantly up your risk for a heart attack, says Park.

Sign of potential heart attack: You have a serious snoring problem 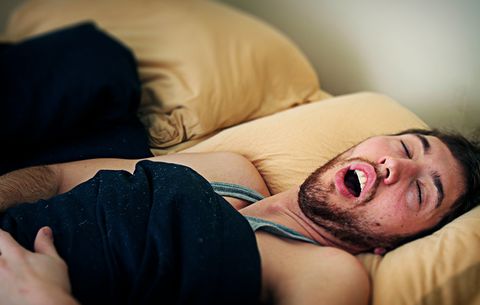 Snoring like a buzz saw, waking up gasping for air, or feeling tired despite going to bed at a reasonable time could all be signs that you have sleep apnea, a sleep disorder marked by pauses in breathing. And if left untreated, it could increase your chance for a heart attack.

Those pauses in breathing can seriously stress your body, raising your blood pressure, causing your heart to beat irregularly, and upping the risk for heart disease, says Segal. And all of those things can make a heart attack more likely.

Sign of potential heart attack: You feel sick to your stomach 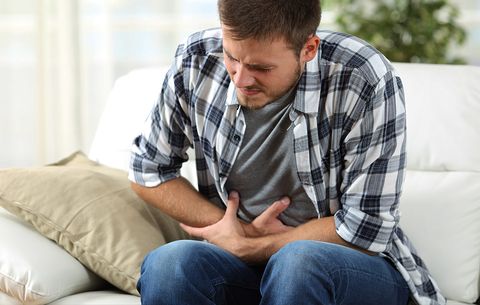 Sometimes nausea, indigestion, or a “burping” feeling that won’t go away is just a sign of a stomach bug. But it can also signal a problem with your heart.

“The nervous system sometimes confuses signals coming from various parts of the body,” says Park. The nerves in your gastrointestinal tract are closely intertwined with the nerves from the heart. As a result, a problem that could be brewing in your heart can sometimes translate as stomach discomfort, he explains.

There’s a way to tell a stomach bug from something more serious, though. Usually nausea caused by an impending heart attack will get worse with physical exertion and ease up when you rest. 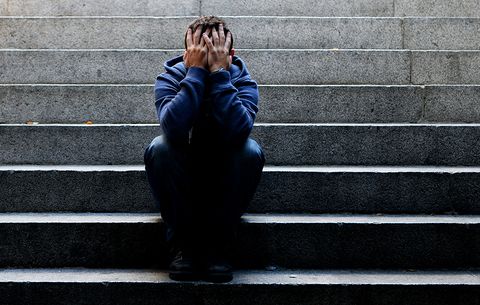 Studies show that women with anxiety are more likely to have reduced blood flow to the heart compared to those without anxiety. And though the same hasn’t been shown for men, it’s still important for guys to consider the relationship between anxiety and heart attack risk, warns Segal.

That’s because many symptoms of anxiety—like chest pain, shortness of breath, and heart palpitations—are also signs of a heart attack, especially if you’re not in the middle of dealing with a stressful situation that might normally cause these kinds of symptoms.

“This can potentially mask heart problems in many patients and lead to significant delays in diagnosis and treatment,” explains Segal. In other words, you’re probably not going call 911 if you think your racing heart is just a mood thing.

Anxiety can put extra strain on your heart too. That’s because feeling tense causes your blood vessels to constrict and speeds up your heart rate, which could both trigger a heart attack, says Segal.

Bloating is common—particularly after eating a super salty meal—but it can also be caused by congestive heart failure. This is because the heart is too weak to properly pump blood through the body, which causes fluids to build up throughout the body.

Generally, you’ll notice swelling in the legs feet, ankles, legs or stomach, according to the American Heart Association. You may even gain weight unexpectedly or notice that your shoes are too tight. If you’re suddenly bloated (and it won’t go away), it may be time to visit the doctor.

What to do if you experience heart attack symptoms 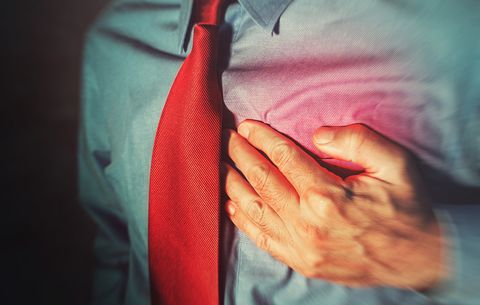 Unlike the classic crushing chest pain, these symptoms don’t guarantee that your heart is in immediate danger. But they could indicate that trouble could be brewing down the road, so make an appointment to see your doctor as soon as you can.

“If you’re fortunate enough to have symptoms, listen to your body and get them checked out,” Park says.

If your doctor suspects that a heart attack could be looming, he might recommend an EKG, a test measures the heart’s electrical activity and shows if your heart is damaged. He might also call for a coronary angiogram, which detects blockages in your arteries.

And if you experience any classic symptoms that signal you’re having a heart attack right now, call 911 ASAP. These include chest pressure or tightness, shortness of breath, lightheadedness, breaking out into a cold sweat, or discomfort in the arms, neck, or jaw.

Of course, the best way to prevent a heart attack is to improve overall health by lowering high blood pressure, maintaining a normal body weight, and abstaining from smoking.

Scotland will attempt to lure GPs across the border from England