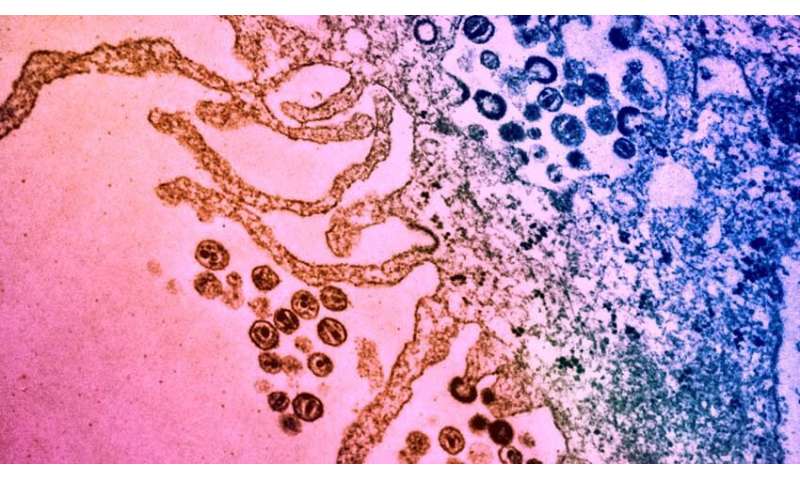 Ever since the first cases of a mysterious disease in the early 1980s exploded into the HIV/AIDS pandemic, researchers have been searching for ways to outsmart the deadly virus. Now thanks to anti-retroviral therapy, people living with HIV can live relatively normal lifespans—as long as they take their medications every day.

“If they ever stop, in short order the virus rebounds and resets at the high levels seen before starting—and that seems to be the case even after decades of therapy,” says Mark Painter, Ph.D., a graduate student in the University of Michigan Medical School’s department of microbiology and immunology.

The reason is that HIV can hide inside the human genome, lying dormant and ready to emerge at any time. Because of this, a true cure for HIV relies on waking the latent virus and eliminating it before it has a chance to again take hold of the body’s cells, an approach known as shock and kill.

Working with a team under the direction of Kathleen Collins, M.D., Ph.D., they set out to find a weapon to kill HIV by targeting a protein called Nef. In 1998, Collins, who is a professor of internal medicine and microbiology and immunology, discovered that HIV uses Nef to evade the body’s immune system by overriding the functioning of a protein on a cell’s surface that lets immune cells know that the cell is infected and in need of elimination. By disabling this protein, called MHC-I, infected cells are able to proliferate.

The research tried determine if there was an FDA-approved drug or molecule already on the market that could override Nef, restore the functioning of MHC-I and allow the body’s own immune system, specifically cells known as cytotoxic T lymphocytes, to recognize the HIV-infected cells and destroy them.

“We started out screening a library of 200,000 small molecules and found none inhibited Nef,” says Painter. Undeterred, they approached David Sherman, Ph.D. of the U-M Life Sciences Institute, whose lab studies the biosynthesis of natural products from microbes, such as cyanobacteria.

“Often synthetic molecules have quite a low molecular weight, meaning they are fairly small. And if you need to disrupt a large protein surface or interface, such as with Nef, a small molecule won’t work well or at all,” explains Sherman. “A natural products library like the one at the LSI, on the other hand, is going to have molecules with a large range of weights and sizes.”

After screening approximately 30,000 molecules, they discovered that a class of antibiotic molecules called pleicomacrolides inhibited Nef.

“Pleicomacrolides are widely used in lab experiments when you want to shut down the lysosome. Because of this, they are considered toxic and risky to use as drugs,” says Painter. The lysosome is an essential cell organelle used to break down worn out cell parts, viruses and bacteria.

However, the team determined that a pleicomacrolide called concanamycin A inhibits Nef at much lower concentrations than those needed to inhibit the lysosome. “As a lead compound for drug development, it’s fairly exciting because we can use a very low dose, and inhibit Nef without short-term toxicity to the cells,” said Painter.

In a proof of concept experiment, they treated HIV-infected, Nef expressing cells with concanamycin A and found that cytotoxic T cells were able to clear the infected T cells.

“It’s been extremely gratifying for this project, which began in my lab over a decade ago to finally come to fruition. I had hoped we would find something that worked as well as this compound does but it was never a guarantee that we would actually be successful. This type of research is risky but extremely important because of the potential reward,” says Collins. But, she adds, the molecule is not yet ready to be used as a drug for treatment of HIV infected people. “More research will be needed to optimize the compound. We will need to further separate the potent Nef inhibitory activity from the more toxic effect on lysosomal function to make it a viable therapy.”

WHO chief: The COVID pandemic is ‘most certainly not over’