Bangkok is the city most in danger of deadly coronavirus because it gets so many travellers from China, as scientists warn LA, New York and London are all at risk

Bangkok faces the greatest threat of the killer coronavirus spreading there from China, scientists have warned.

Academics at the University of Southampton today used travel data to work out which cities around the world are most likely to see cases in the future.

Los Angeles and New York place in the top 20 and London is more at risk than any other city in Europe, researchers warned.

Paris was 27th on the list and Frankfurt was 30th, despite cases having been confirmed in France and Germany already.

Five people in the US are battling the virus but none have yet been confirmed in the UK.

The UK’s Department of Health today confirmed almost 100 people have now been tested for the deadly coronavirus.

All of them have come back as negative, but Public Health England director said she believes the virus is already in the UK.

So far, the virus has spread to some 17 countries or territories outside of mainland China but experts said they expect the global infections to continue. 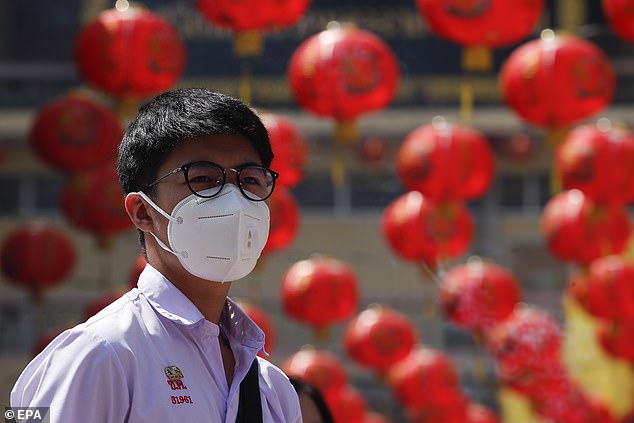 Bangkok faces the greatest threat of the killer coronavirus spreading from China. One case already confirmed in the hugely populated Thai city (Pictured: A man wears a face mask in Bangkok) 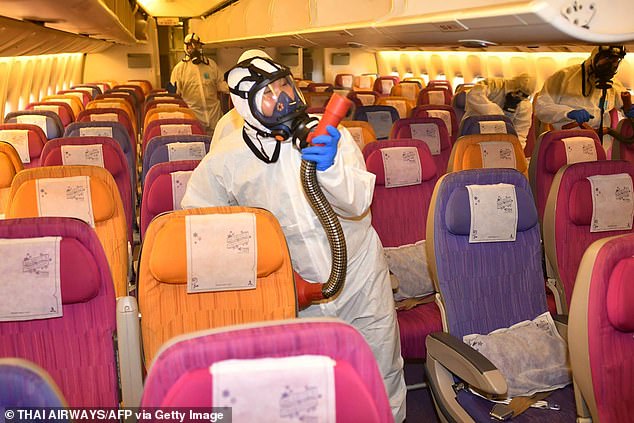 At least five million people are expected to have left the diseased region of Hubei in China for Lunar New Year before a travel ban was put in place. Pictured, staff disinfecting an aircraft at Thai Airways airline’s hangar in Bangkok

The research comes as European and American citizens stranded in Wuhan, the Chinese city at the centre of the outbreak, wait to be rescued by officials scrambling to put escape flights in motion.

Wuhan has been under lockdown along with several other cities in the Hubei province for almost a week.

Millions of people have been contained to try and limit the spread of the coronavirus.

However, at least five million people are expected to have left the diseased region before restrictions were put in place ‘too late’.

In the weeks leading up to the travel ban, Chinese tourists flew across the world for Lunar New Year holidays. At the same time, the number of patients struck with the virus soared.

Coronavirus is deemed highly contagious and transmitted via a simple cough or sneeze. 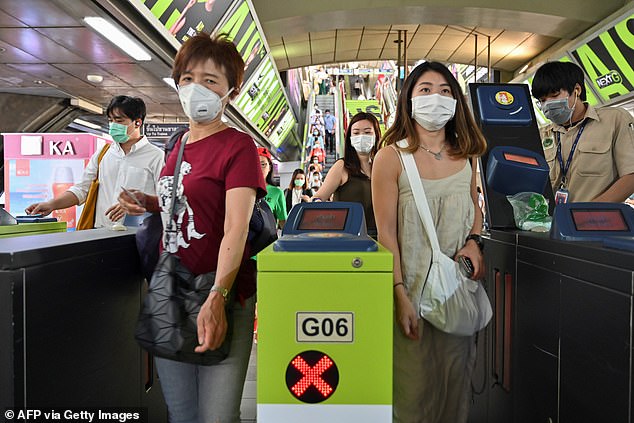 The Thai government is meeting today to discuss how to evacuate the 70 known expats living in Wuhan, most of whom are students. European and American citizens are also waiting to be rescued by officials. Pictured, a train station in Bangkok where people are wear masks

Wuhan coronavirus, also known as 2019-nCoV, is confirmed to have infected at least 4,500 people globally as of today. It’s killed 106 in China in under a month.

Southampton’s Professor Tatem and colleagues used anonymised mobile phone and IP address data and international air travel 15 days before the annual Lunar New Year and the two and a half months following.

The analysis was based on data from previous years, and did not take into account the effect of the outbreak or the travel restrictions in Hubei province implemented on January 23.

However, the team highlighted that a high proportion of people typically travel before in the two weeks before Luna New Year’s day, on January 25.

The report by the University’s WorldPop team found Bangkok in Thailand is under the biggest threat, based on the number of air travellers predicted to arrive there from the worst affected cities in mainland China.

Thailand has 14 confirmed coronavirus cases – the most outside of China. The country’s health minister Anutin Charnvirakul has reportedly admitted the country cannot stop the virus from spreading because there are so many Chinese travellers there.

Hong Kong, in China, is second on the list, followed by Taipei, the capital of China’s Taiwan, and Seoul, in South Korea.

London typically has more than 142,000 tourists from China over the period January to mid-March.

WHICH CITIES ARE MOST AT RISK?

WHICH COUNTRIES ARE MOST AT RISK?

The most at-risk countries or regions worldwide are rank Thailand 1st, followed by Japan. US is 6th, Australia 10th and the UK 17th.

Within mainland China, the cities of Beijing, Guangzhou, Shanghai and Chongqing are all identified as high-risk by the researchers, along with the Chinese provinces of Guangdong, Zhejiang, Sichuan and Henan.

Andrew Tatem, director of WorldPop and professor of geography and environmental science, said: ‘It’s vital that we understand patterns of population movement, both within China and globally, in order to assess how this new virus might spread – domestically and internationally.’ 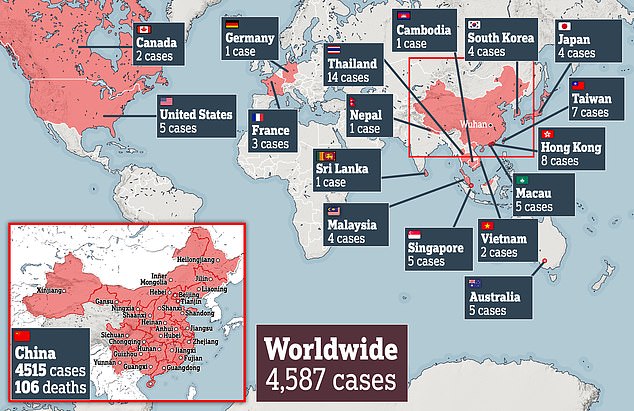 The killer coronavirus outbreak has now killed 106 people and struck down more than 4,500. Cases have been spotted in Canada, US, France and Australia 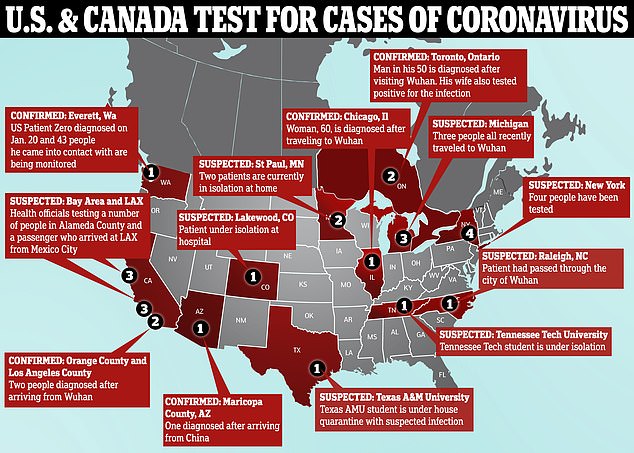 As of Monday, there are five confirmed cases of coronavirus in the US and 110 patients are being tested across the country 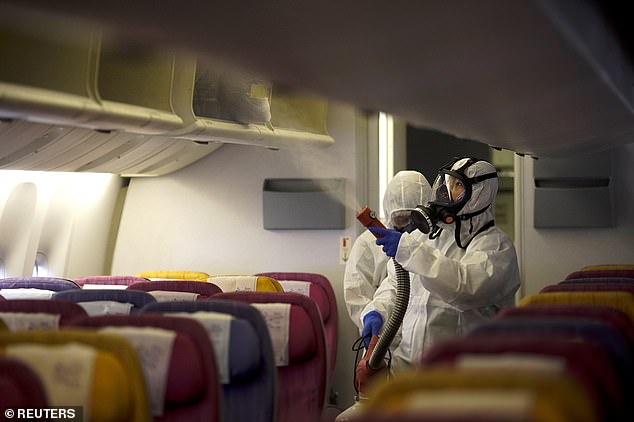 Thai Airways employees are pictured disinfecting an empty plane cabin at Suvarnabhumi International Airport in Bangkok today, January 28. Thailand has 14 confirmed coronavirus cases – the most outside of China 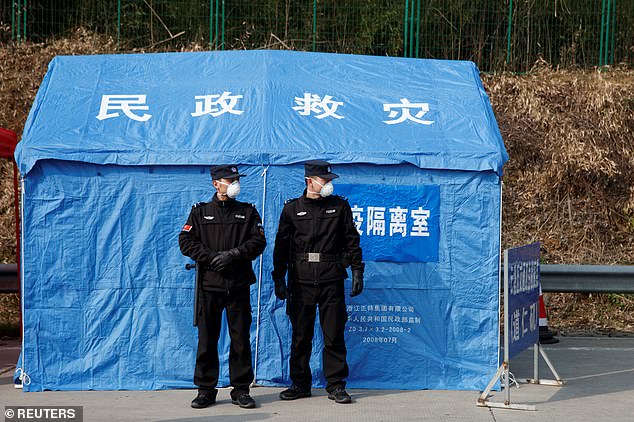 Security guards stand beside a disaster relief tent in Hunan province, near the border of Hubei where Wuhan is the capital. Photographed today, January 28

WHERE HAS THE WUHAN CORONAVIRUS SPREAD TO?

But 17 countries or territories outside of the mainland have also declared infections:

The unexpected and sudden city lockdowns were likely put in place too late, after millions had already fled the country to celebrate Lunar New Year.

Up to five million – some of which may have had symptoms – travelled at an early stage of the outbreak, before restrictions were put in place.

Lead report author Dr Shengjie Lai of the University of Southampton said: ‘The spread of the new coronavirus is a fast moving situation.

‘We are closely monitoring the epidemic in order to provide further up-to-date analysis on the likely spread, including the effectiveness of the transport lockdown in Chinese cities and transmission by people returning from the Lunar New Year holiday, which has been extended to 2 February.’

The deadly outbreak is expected to carry on for at least another six months, infecting tens of thousands of people at a minimum, according to a scientist at the University of Toronto, Canada.

Professor David Fisman, who wrote a report for the International Society for Infectious Diseases, said: ‘The best case scenario, you would have something… where we go through the spring into the summer, and then it dies down.’

The outbreak started in December with less than 50 cases identified. Germany, Sri Lanka and Cambodia yesterday became the latest countries to declare cases.

With almost 5,000 cases confirmed already in January, a further 25,000 cases may occur if the infection continues to spread at the current rate.

A vaccine against the coronavirus is at least two months away from trial, researchers have warned. By that time, hundreds more could have died and numerous other countries been infected.

It was initially believed infected people were not contagious until they got symptoms such as fever, coughing or pneumonia. But Chinese authorities said on Sunday they had established the opposite.

There is also growing evidence that people can infect others without knowing they’re ill and there are ‘super-spreaders’ who pass the coronavirus on to multiple people.

WHAT ARE COUNTRIES DOING TO GET THEIR CITIZENS OUT OF CHINA?

British ex-pats and tourists stuck in Wuhan have begged officials to ‘get us out of here’, venting their frustrations at the Government’s response so far.

About 300 Britons who live in the city are growing increasingly anxious after the number of virus cases soared by 50 per cent in just 24 hours.

They accused the UK of dithering as it emerged the US, France, Spain, Australia, Japan, Thailand and Sri lanka had already organised evacuations for its citizens.

France’s health minister Agnes Buzyn said officials will put ‘hundreds’ of citizens on a direct flight to the country later in the week.

She said authorities were working on arranging a bus service to get the expats to the airport.

There are some 800 French citizens stranded in the Wuhan area.

She said French nationals will be held in quarantine for two weeks on arrival to stop the virus spreading on home soil.

French car manufacturer Peugeot Citroen, which has a factory in Wuhan, said it was moving foreign employees and their families by bus to be quarantined in another city.

The US State Department is organising a single flight out of Wuhan on Tuesday directly to San Francisco.

It said in the event there are not enough seats, priority will be given to to individuals ‘at greater risk from coronavirus’ – those already showing symptoms.

Officials invited US citizens with a valid passport to contact the embassy in Beijing.

Private citizens are expected to later repay the travel costs, the notice said.

It is reported that a Boeing 767 jet – that can carry around 230 passengers – will fly the citizens home.

There are roughly 1,000 Americans living in and around the Wuhan area.

The German government said it was ‘considering a possible evacuation of all willing German citizens’ from Wuhan.

On Monday January 27 it advised all citizens to avoid travelling to China at all unless the trip was necessary.

Japan said it planned to evacuate all of its citizens using chartered flights. It claimed it was in final discussions about the logistics with Chinese authorities.

Some 430 Japanese nationals reside in or near Wuhan.

The government is also considering evacuation by road from Hubei Province, and have Japanese nationals take flights home from other places, according to Japanese media.

She did not provide further details.

The government is meeting today to discuss how to evacuate the 70 known expats living in Wuhan, most of whom are students.

Air force commander ACM Manat Wongwat said that up to four planes with medical staff are on stand-by to evacuate its citizens in the coming days.

Officials have applied for a chartered plane to be allowed to land at Wuhan airport and pick up 32 Sri Lankan students and their family members stranded in the outbreak’s epicentre.

Its foreign office also said it was working to bring back all other citizens living in the wider Hubei province.

There are about 860 Sri Lankan students are in China.

Foreign Minister Marise Payne said her government is ‘exploring all opportunities’ to help with evacuation of a number of Australians reportedly in Wuhan.

There are thought to be a small number of citizens living in the central Chinese city.

India has asked China if it can make arrangements for its expats to leave.

It is not clear how and when India plans to evacuate its citizens if approval is granted. Around 250 Indians are still in Wuhan.

Pesticides, Teflon and Celiac Disease: How They Are Linked