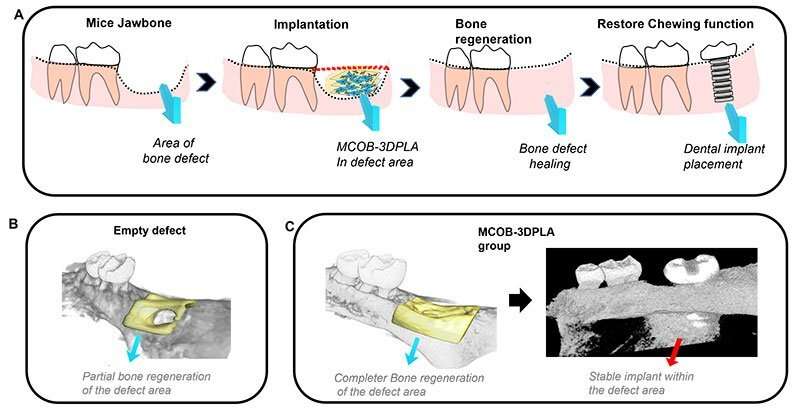 Tohoku University scientists in Japan have made a scaffold that supports the growth of new bone in large jaw defects in mice. Their findings, published in the journal PNAS Nexus, bring scientists one step closer to addressing the issues currently facing the treatment of large jaw bone defects, especially in the elderly.

As people age, they become prone to losing bone tissue in their jaws, making it difficult to eat. There are several ways to treat this, but each has its limitation, especially when the defect is large and not completely surrounded by bone. Scientists are working on finding ways to transplant bone cell-carrying scaffolds into these defects to stimulate new bone growth.

Masahiro Saito is professor of dental conservation at Tohoku University. He and his team develop regenerative therapies for dentistry that could also have applications in the broader orthopedics and medical fields. The team has fabricated a scaffold made from polylactic acid and gelatin that is showing promise for treating large bone defects.

Their cotton-like scaffold is made using a technique called electrospinning, which involves applying high voltage to a polymer solution to stretch its fibers using an electrical field. The team found that their scaffold was strong enough to hold and grow bone cells, including immature osteoblasts taken from human jaw bones.

However, when human cell-carrying scaffolds were transplanted into large defects in pig jaws, they failed to form new bone. The team believes that the pigs’ immune systems rebelled against the human cells.

So instead, the team tried the same technique using bone cells from mice and then implanting the cell-carrying scaffolds into defects in mice jaws. This led to a successful result: strong bone formed inside the large defects within eight weeks. The bone was strong enough to withstand the insertion of dental implants. This shows promise for using the bone as a base for use with dentures and tooth implants.