An Indian man covered head-to-toe in hundreds of tumours that look like bubbles is desperate to find a cure.

Diwakar Bisoye’s largest tumour on his leg weighs around 56lbs (25kg), according to local reports state.

The 65-year-old, of Odisha state, says he is treated worse than a ‘dirty stray animal’ by people in his neighbourhood.

Mr Bisoye has even become house-bound due to his condition, avoiding ever leaving his house out of fear of being ridiculed.

Doctors believe he suffers from neurofibromatosis, a debilitating genetic illness that causes lumps to grow along nerves.

Mr Bisoye’s lumps began appearing around 15 years ago. But his body soon became ravaged entirely, with masses even covering his eyelids. 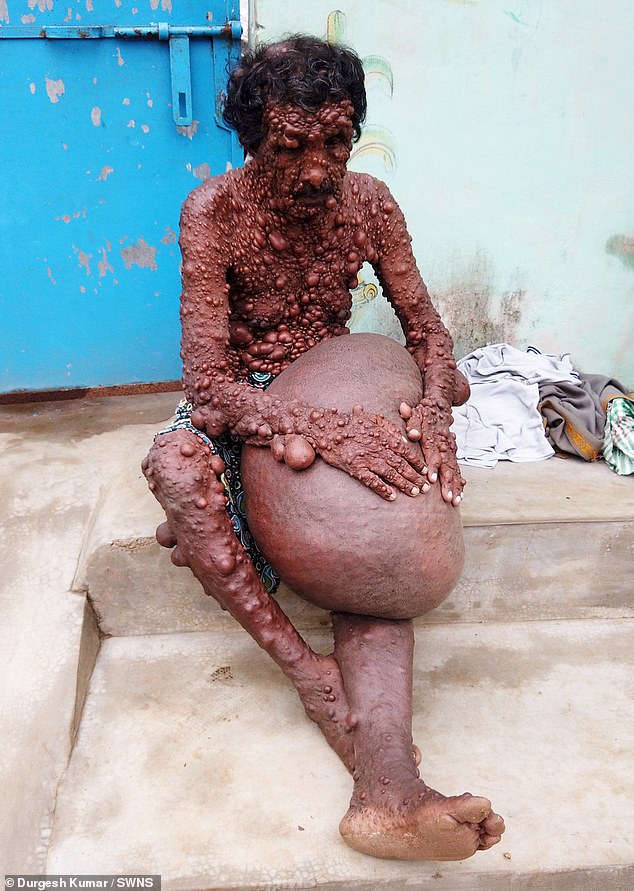 Diwakar Bisoye, 65, from Odisha State, India, is nicknamed the ‘bubble skin man’ because of a condition which causes hundreds of small lumps under his skin 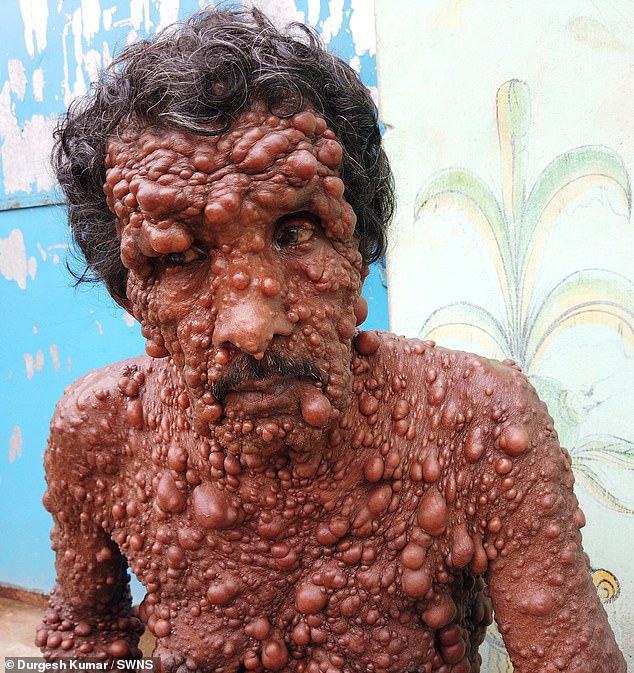 Mr Bisoye said: ‘People mock and ridicule me directly. They stare at me and avoid me.

‘Most people act very strange around me. No one likes looking at me or being near me. People think I will infect everything.

‘Landlords don’t want me living in their property or ask me to leave when people complain about my condition. It’s left me without a job for 15 years.’

Scientists have classified the disorders into several subtypes, including NF1 and NF2. Another type is called schwannomatosis.

Depending on the type of neurofibromatosis, it can also cause hearing loss, balance and vision problems and freckles on the skin.

An estimated 100,000 Americans have neurofibromatosis, while NF1 and NF2 affects more than 26,000 people in the UK.

Scientists don’t know how to prevent neurofibromas from growing. Surgery is often recommended to remove tumors that are at risk of becoming cancerous.

Mr Bisoye is desperate to have his condition cured. However, he claims no treatment is available near his isolated village.

Dr Lyer said: ‘This is a hereditary genetic disorder and has at present no medical treatment.

‘The only solution is the surgical removal of troublesome swellings. Considering his extensive numbers, this may have to be done in stages’. 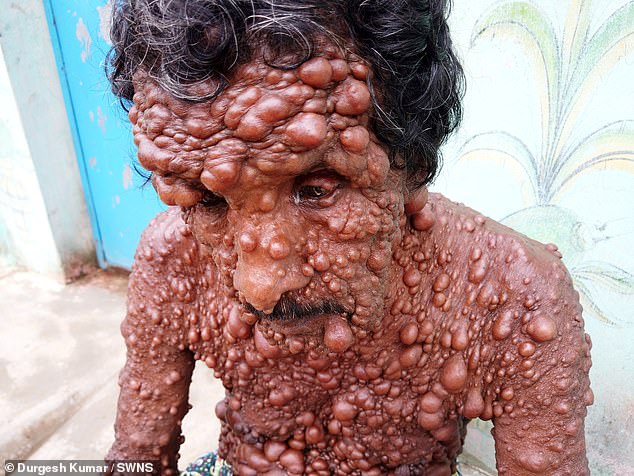 It is likely Mr Bisoye suffers from neurofibromatosis, a genetic and incurable illness 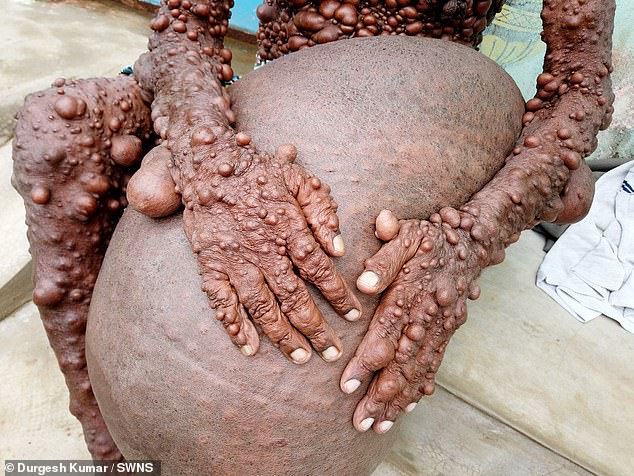 The lumps started off as small around 15 years ago. Now, Mr Bisoye’s largest tumour, on his leg, reportedly weighs 4st (25kg) (pictured) 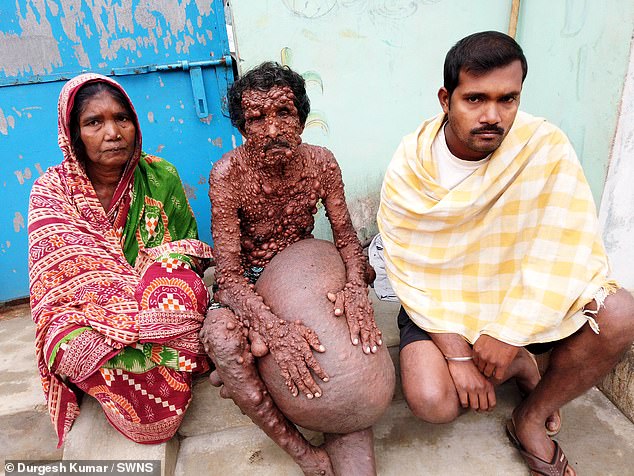 Mr Bisoye, pictured with family, has become house-bound due to his condition in fear of being ridiculed by strangers, he says

Neurofibromatosis is the name of a group of conditions that cause lumps to grow on the coverings of nerves.

NF is caused by a mutation in one of the genes. About half of the people who have NF have no family history of the condition.

This is called a spontaneous gene mutation. The other half of people will have inherited NF from their mother or father.

Some sufferers are affected by neurofibromas, which usually appear during adolescence.

These may first appear on the skin as a purplish mark, before a small fibrous lump appears.

They can also grow along deeper-seated nerves inside the body, which can be painful if knocked.

The lumps can increase in number during a person’s lifetime.

NF has also been linked to an increased risk of stroke if growths develop on nerve cells in the brain and cut off the organ’s blood supply.

There is no treatment to stop the lumps from appearing, although surgery or laser treatment can sometimes be used to remove them.

High blood pressure: Eating this summer fruit could help you lower your reading

Healthy Halloween Trick Or Treat Gift Ideas For Your Kids