Commuters should walk or cycle to work to cut their risk of suffering a heart attack, research suggests.

Data from 43million people in England showed rates of heart attacks were lower in areas where ‘active commuting’ is popular.

The benefit was small – just a 1.7 per cent risk reduction – but applied to both men and women, Leeds University researchers found.

They have now called for employers to make it easier for workers, who often spend hours stuck in cars and on trains, to be active on their commute.

The Government is being encouraged to implement cycle paths on main roads, for example. 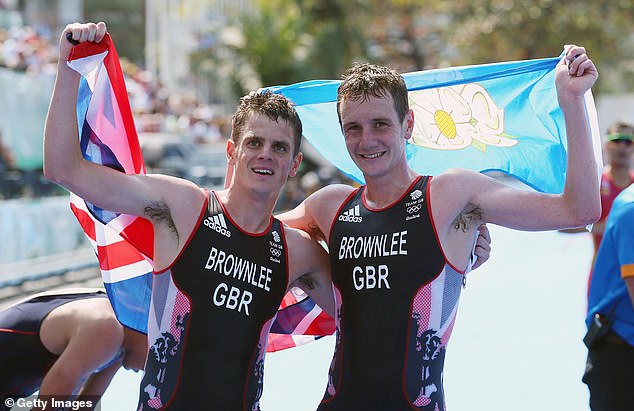 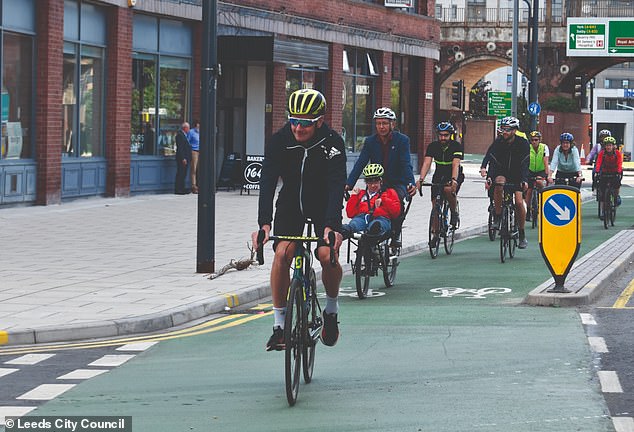 Commuters who walk or cycle to work can prevent a heart attack, a study of 43million Britons has shown. Pictured, Alistair Brownlee, a co-author of the study and Team GB Olympic-medal winning triathlete using a cycle lane in Leeds

In a call to action, Alistair said: ‘Our study shows exercise as a means of commuting to work is associated with lower levels of heart attack.

‘We need to see vast improvements in cycling and walking infrastructure to help make people more confident in their routes, and encourage them away from relying on private cars.’

The study used data from the UK Census of 2011. The participants, all aged 25 to 74, were employed in England.

They compared this with 2011 to 2013 data from the UK national heart attack register (Myocardial Ischaemia National Audit Project (MINAP)) and Public Health England.

Active commuting was defined as people who reported their main mode of transport to work as either ‘bicycle’ or ‘on foot’.

One in nine participants were active commuters – 8.6 per cent walked and 2.8 per cent cycled, the findings in the European Journal of Preventive Cardiology show.

Uptake of active commuting significantly varied geographically. Only five per cent walked or cycled in some local authorities – compared to 41 per cent in others.

In areas where walking or cycling to work were more common, incidence of heart attacks fell for both men and women across the following two years, according to data for hospital admissions.

This was after accounting for other risk factors for heart attacks, including overall lack of exercise, being overweight, smoking and diabetes.

Lead author Professor Chris Gale, a consultant cardiologist, said: ‘Whilst we cannot conclusively say active travel to work lowers the risk of heart attack, the study is indicative of such a relationship.

‘The effect of active commuting is fairly modest when compared with the stronger determinants of cardiovascular health such as smoking, obesity, diabetes and regular exercise.

WHAT IS A HEART ATTACK?

Figures suggest there are 200,000 hospital visits because of heart attacks in the UK each year, while there are around 800,000 annually in the US.

A heart attack, known medically as a myocardial infarction, occurs when the supply of blood to the heart is suddenly blocked.

Symptoms include chest pain, shortness of breath, and feeling weak and anxious.

Heart attacks are commonly caused by coronary heart disease, which can be brought on by smoking, high blood pressure and diabetes.

Treatment is usually medication to dissolve blots clots or surgery to remove the blockage.

Reduce your risk by not smoking, exercising regularly and drinking in moderation.

Heart attacks are different to a cardiac arrest, which occurs when the heart suddenly stops pumping blood around the body, usually due to a problem with electrical signals in the organ.

‘However, this study clearly suggests exercising on the way to work has the potential to bring nationwide improvements to health and well-being.’

There are around 200,000 hospital visits because of a heart attack in the UK each year.

Professor Metin Avkiran, associate medical director at the British Heart Foundation which funded the study, said: ‘Finding time to exercise can be tricky given our increasingly busy and often sedentary lives.

‘But exercising doesn’t have to involve a pricey gym membership or hours spent on a treadmill.

‘Upgrading your commute – by swapping the gas pedal for a bike pedal – is a great way to get your heart pumping on a daily basis.

‘If that’s not an option, parking a few streets away or getting off the bus a few stops early can help pave the way to a longer, healthier life.’

The Government has recognised the potential of active transport to help tackle physical inactivity, climate change, air pollution and congestion.

The Government’s current aim is to double the number of people cycling by 2025.

But the proportion of people who exercise as part of their commute still remains low, said the researchers.

In July, the Transport Select Committee published a report on active travel, concluding that walking and cycling have not been given enough attention by policymakers and current targets are not ambitious enough.

Cycling and Walking Minister Chris Heaton-Harris said: ‘Active travel has clear benefits – both for people and the environment – and this research provides further compelling evidence to encourage more people to travel by bike or on foot.

‘To help get more people walking and cycling, we have invested £2billion over five years.

‘On top of this, we are providing a £350million Cycling Infrastructure Fund to increase provision for separated bike lanes on main roads, which will let thousands exercise safely as part of their daily commute.’

Long-lasting medications may improve treatment satisfaction for opioid use disorder

Is it eczema or psoriasis? How to tell the difference between the two skin conditions