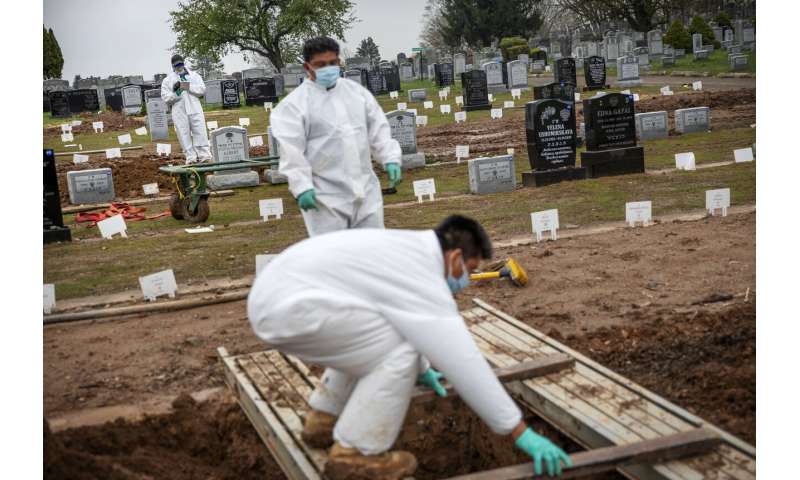 The U.S. has seen at least 66,000 more deaths than usual so far this year, according to government data, and the new coronavirus accounts for much—but not all—of the increase.

Usually the nation sees about 1 million deaths by the end of April, meaning the rise is in the neighborhood of 7%.

The Centers for Disease Control and Prevention, which posted the data this week, found the new coronavirus was reported as a cause in about half the excess deaths. It’s likely the virus was a factor in many other deaths too, said Robert Anderson, who oversees the CDC’s death statistics work.

But COVID-19 isn’t the sole reason for the jump.

Medical examiners say drug overdoses, falls and certain types of accidents around the house may be up. Experts also believe at least some of the excess deaths may have been people with heart problems or other conditions who decided not to go to a hospital because of concerns they were filled with coronavirus-infected people.

“Everybody’s afraid to go to the hospital. And they may be dying more frequently because they’re not taking care of their coronary,” said Dr. Arnold Monto, a University of Michigan researcher who studies flu and coronaviruses.

The virus has become a top killer in some places.

In Connecticut, it was the leading cause of death in April, said Dr. James Gill, the state’s chief medical examiner. The office has handled over 2,300 certified coronavirus-related deaths since late March. Normally, the state averages 2,500 deaths in a typical month.

Five states—Michigan, New Jersey, New York, Pennsylvania and Virginia—each saw at least 3,000 deaths more than normal through last week, according to the analysis of provisional death certificate data by the CDC’s National Center for Health Statistics.

The analysis was based on data through last week. Data from more recent weeks is less complete than older information, Anderson said. It can take weeks for the death certificate data to catch up with case reports, which suggest that the nation’s current COVID-19 death toll is more than 60,000.

Medical examiners are making extra efforts to ensure virus cases are counted, though scientists are still trying to determine how accurate the tests are for the deceased.

Connecticut investigators, for example, tested 160 bodies at funeral homes for coronavirus, and more than half came back positive.

“Many of those death certificates had things like ‘respiratory failure’ and other non-specific causes of death,” Gill said. “Without our going and doing the swabbing, those would have been deaths that were missed.”

In some places—especially rural ones—coroners or medical examiners may not have the staff to ask about coronavirus symptoms every time there’s a home death, said Dr. Sally Aiken, the county medical examiner in Spokane, Washington, and president of the National Association of Medical Examiners. Testing shortages are also a problem.

She has been telling death investigators around the country to save specimens for future testing. The CDC recently used such tests to discover two coronavirus deaths that reset the public understanding of when infections began spreading in California, she noted.

“You may not have the testing you need today but you probably will at some point,” Aiken said.

She also offered one surprising observation: Stay-at-home orders may be keeping many people off the roads in some places, but that doesn’t necessarily mean car crash deaths are down.