Covid could be on the return due to the spread of new Omicron variants, official data has revealed.

The Office for National Statistics’ (ONS) weekly Covid infection survey estimated 797,500 people in England, about one in 70, had the virus each day in the week ending June 2.

The figure — based on random swabs from hundreds of thousands of people across the country — is up nearly 1.7 per cent on last week and marks the first rise in Covid cases since the end of March.

A similar increase in cases was observed in Northern Ireland, and while a rise in cases was also seen in Wales and Scotland the ONS described this as being ‘uncertain’.

In total 989,800 people in private households are estimated to have had the virus last week, up from 953,900 the previous week.

ONS statisticians said the rise is likely driven by the new Omicron variants BA.4 and BA.5.

The survey is the last remaining official surveillance programme used by the Government to track the state of the pandemic after mass testing was scrapped for most of the population in February.

Its latest results breaks a six week streak of recording a fall in cases, despite no Covid restrictions being in place.

Scotland recorded the highest Covid prevalence with 2.36 per cent of the population, about 1 in 40, estimated to have the virus.

Sarah Crofts, head of analytical outputs for the COVID-19 Infection Survey, said: ‘Today’s data shows a mixed picture for infection rates across the UK, with small increases in England and Northern Ireland, likely driven by increasing trends in Omicron BA.4 and BA.5 variants.’

‘Infections with Omicron BA.2 remain the most common variant of COVID-19 and continue to decrease across much of the UK. We will continue to monitor the data closely.’ 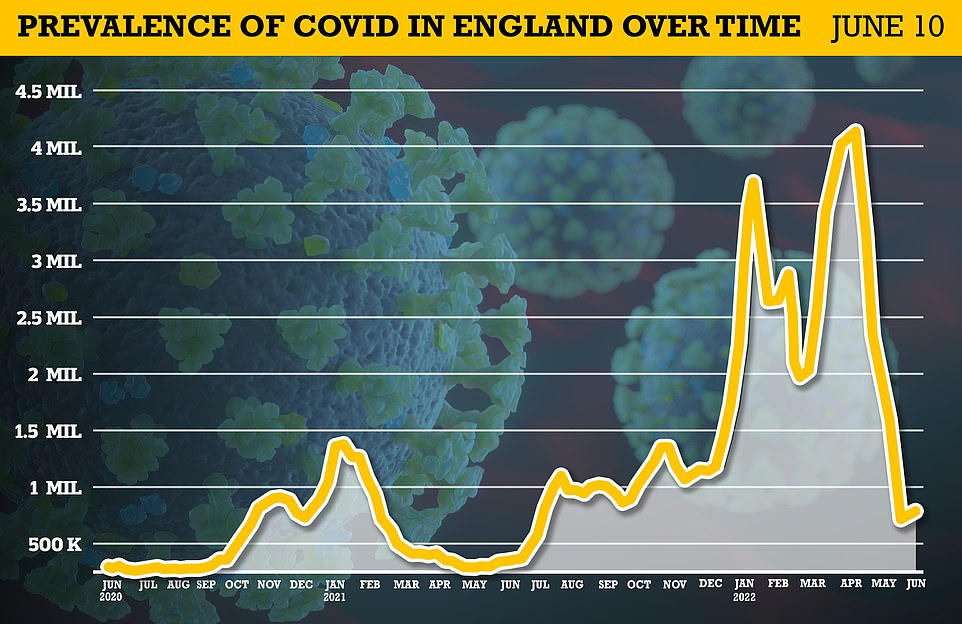 Office for National Statistics (ONS) statisticians estimate 797,500 people in England had Covid each day during the week ending June 2 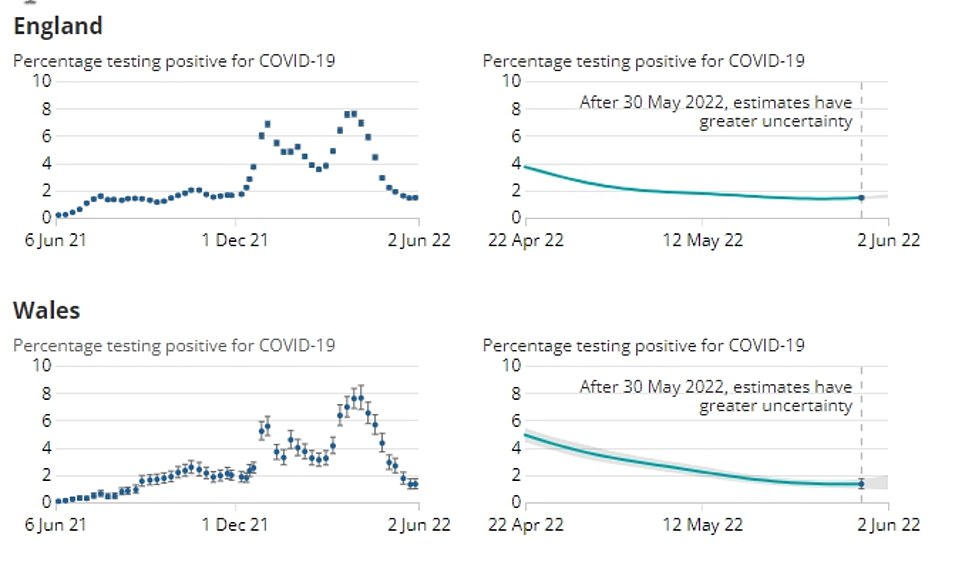 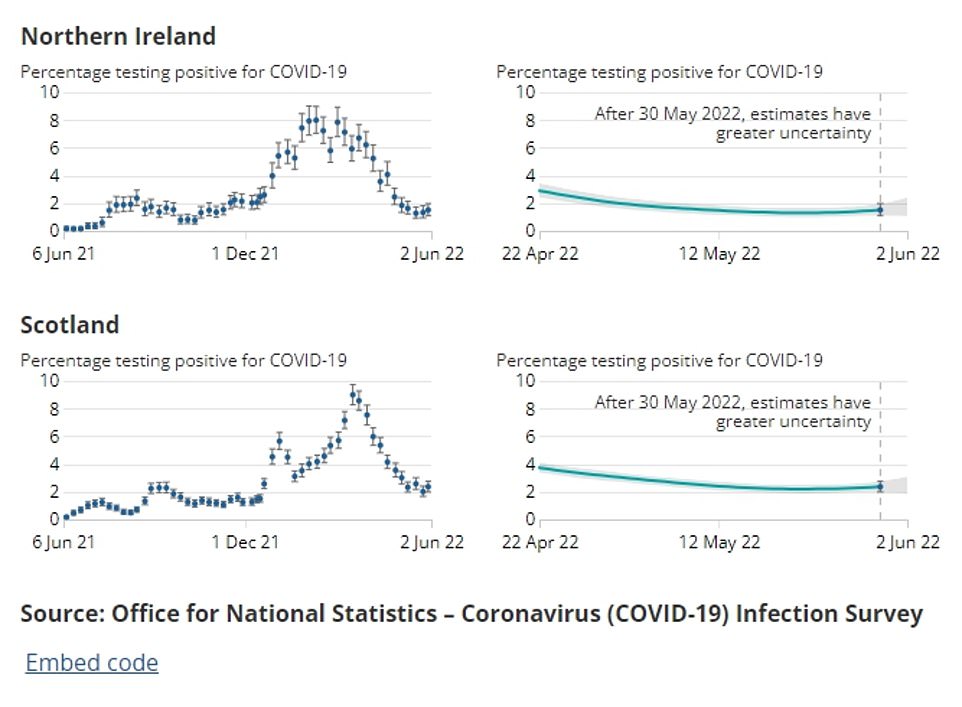 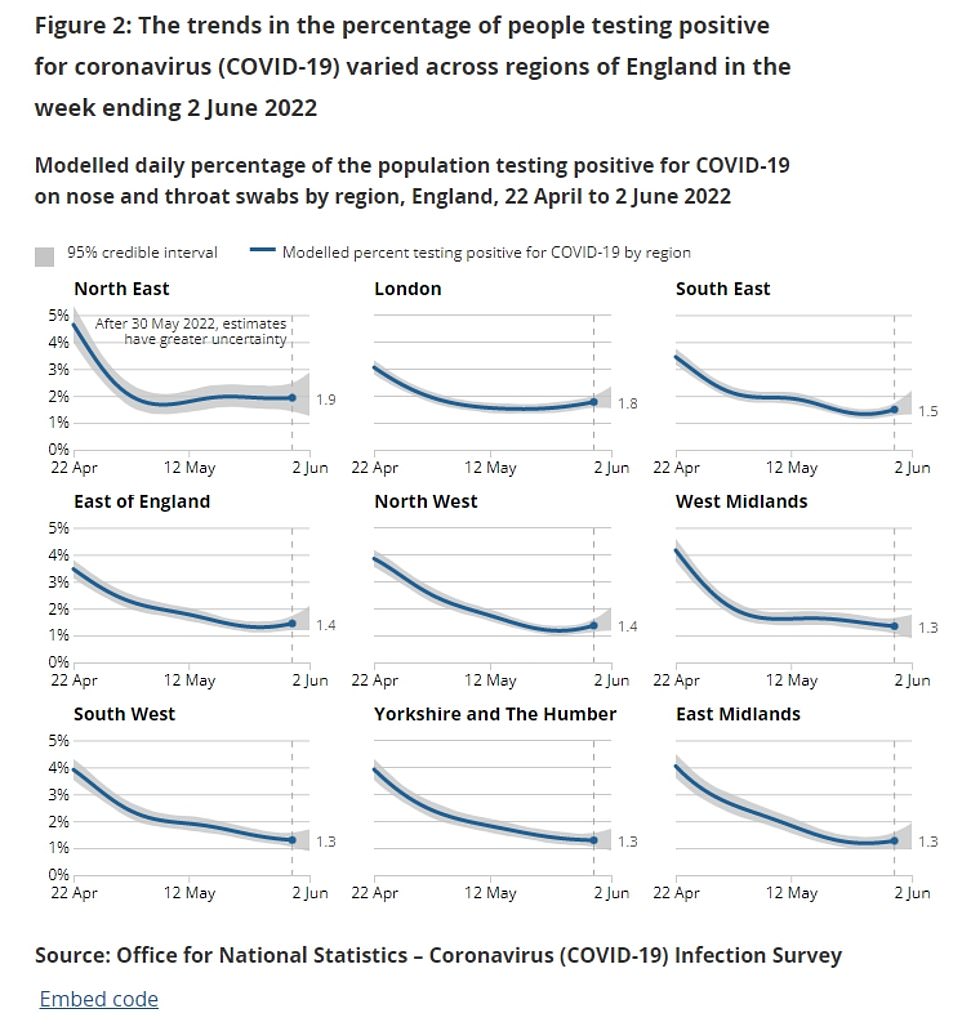 For England, Covid rates were highest in the North East with 1.9 per cent of people testing positive, followed closely by London with 1.8 per cent, and the South East with 1.5 per cent.

Overall Covid rates in England increased week on week in the North West, the South East and London with potential early signs of an increase in the East of England with an estimated 1.4 per cent of the population testing positive for the virus.

Decreases were seen in the in the West Midlands and the South West with the trend uncertain in the East Midlands and Yorkshire and The Humber, as well as the North East.

For the UK as a whole, the highest rate was recorded in Scotland with the majority of local areas reporting rates of 2.5 per cent.

How to get rid of headaches: The surprising spot to massage to ease a sore head

COVID-19 vaccine effectiveness down against new infections in New York