‘Designer vagina’ procedures may be more risky than doctors realise, scientists have suggested.

Plastic surgeons have long thought nerves sit deep below the surface of the clitoris, which is protected by a hood of skin.

But experts have now found crucial nerves responsible for sensation and orgasms sit just millimetres under the clitoral hood.

They are also wider than expected, with scientists saying they are of a similar size to ones that run along the shaft of a penis.

When these nerves have been damaged in botched surgery, women have reported an inability to orgasm and daily sharp pain.

Medics at the University of Texas Southwestern Medical Center studied the vulvas of 10 dead women, aged between 43 and 88.

Tens of thousands of women go under the knife each year for procedures to neaten their genitals, including a labiaplasty.

The procedure, which is growing in popularity, involves trimming back folds of skin either side of the vaginal opening.

Some women also opt to have their clitoral hood reduced. This is normally carried out alongside a labiaplasty.

But a lack of research into the female anatomy means scores of plastic surgeons are unaware of where the nerves are situated.

Scientists have found dorsal nerves (pictured in diagram) involved in sexual pleasure and sensation sit just millimetres below the surface of the clitoral hood. The diagram shows inside the clitoris from the front view 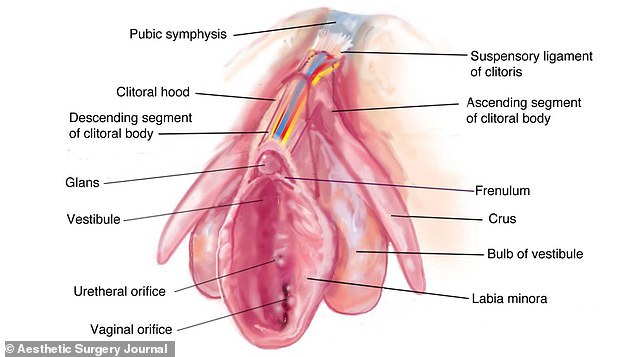 A diagram shows the female anatomy, including the clitoral body and clitoral hood which were studied by University of Texas Southwestern Medical Center

Dr Paul Pin from the Baylor University Medical Center in Dallas, Texas, was involved in the research, published in the Aesthetic Surgery Journal.

‘They [the nerves] are large, superficial and therefore very susceptible to injury if you don’t know what you’re doing’, he told New Scientist.

Dr Pin collaborated on this work with his daughter Jessica, a volunteer researcher at Baylor.

WHAT IS A ‘DESIGNER VAGINA’?

A ‘designer vagina’ is a term referring to a combination of procedures which women have in pursuit of the ‘perfect vagina’.

The most common procedure is labioplasty – surgery to reduce the size of the labia minora – the flaps of skin either side of the vaginal opening.

Worldwide, more than 132,600 labioplastys were performed by plastic surgeons in 2018, according to the International Society of Aesthetic Plastic Surgery (ISAPS).

Vaginal rejuvenation, or vaginoplasty,  was designed to reduce the size of the actual vaginal canal. Women also have it to prevent urinary incontinence and prolapse.

Laser technology heats the insides of the vagina, reportedly boosting blood supply and growth of tissue inside – therefore making it ‘tighter’ and more sensitive.

Clitoral hood reduction removes ‘excess folds of the clitoral hood’ to balance out the appearance of the genitals. The procedure is most commonly done along with a labiaplasty. Figures for the procedure are not recorded.

He said: ‘The demand for cosmetic procedures is stronger than ever.’

She had a labiaplasty at the age of 18 and claims that the dorsal nerves of her clitoris were cut during the procedure, which can cost around £3,000.

She said: ‘In the years following my surgery, I was repeatedly told my loss of clitoral sensation couldn’t have happened.

The study, led by Dr Joseph Kelling, aimed to expand the medical literature on the female anatomy because it is currently ‘lacking’.

He and colleagues dissected the clitoral regions of 10 women who recently died and had donated their bodies for research.

They investigated the various parts of the clitoris, including the glans and the hood which vary in size.

The pea-sized glans, rich with nerves, is protected from friction in everyday life by the hood, which is just a fold of skin.

When the woman becomes sexually aroused, the glans gets bigger and the clitoral hood moves aside.

The researchers found that the dorsal nerves, which are vital for sexual sensation, sit six millimetres under the surface of the clitoral hood.

The nerves end near or at the base of the glans, which is the primary spot for sexual pleasure, the scientists said.

The nerves were larger than first thought, ranging from two to three millimetres in diameter, similar in size to those running along the shaft of the penis.

Similar measurements have been found in previous studies. However, this is the first to measure the diameter of the dorsal nerves.

Improving knowledge of the female anatomy is ‘critical’ for the safety of performing surgery near the clitoris, the researchers warned.

They wrote: ‘Knowledge of clitoral anatomy is especially important in the field of genital cosmetic surgery, which has rapidly gained popularity over the last decade.

‘However, coverage in plastic surgery literature remains lacking. Correction of this gap is important, as plastic surgeons perform a number of surgeries in the area.’

There has been a 217 per cent increase in popularity for labiaplasties in the US in the past five years, figures suggest.

Worldwide, more than 132,600 of the procedures were performed in 2018, according to the International Society of Aesthetic Plastic Surgery (ISAPS).

All procedures to give women a ‘designer’ vagina come with health risks, including bleeding, infections and scarring.

This research suggests an absence of information on the female anatomy puts the nerves at risk of injury, leading to loss of clitoral function.

There is anecdotal evidence on online forums of women’s’ lives being ruined after having ‘designer vagina’ procedures.

Miss Pin told The Establishment that the loss of her sexual functioning after her libioplasty combined with the backlash she’d received for openly talking about it had left her suicidal.

Another anonymous woman who had surgery to repair a tear to her labia after a sexual assault claims the doctors ‘remodelled’ her entire vulva without her consent.

She claims to have nerve damage from the extensive work, suffering ‘extreme burning sensations, sharp pains in my clitoris glans, shaft, up the inguinal nerves and into my cervix’ and an inability to walk.