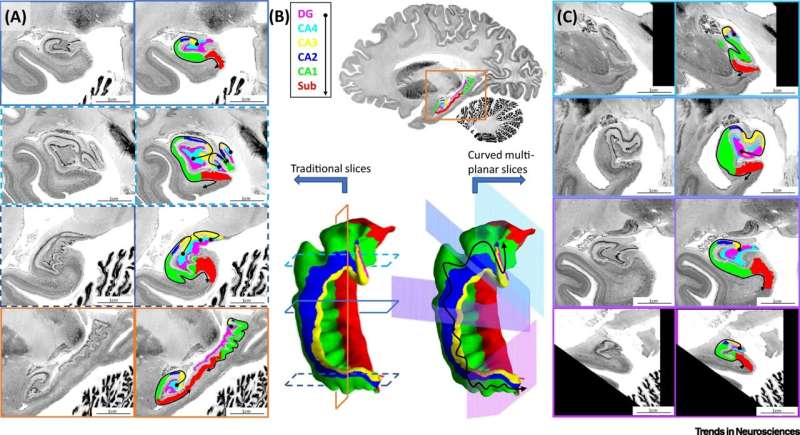 A new technique developed at Western University to visually iron out the wrinkles and folds in one region of the brain may provide researchers a more accurate picture to understand brain disorders.

The hippocampus is a region of the brain often looked at by clinicians and researchers for clues to understand disease progression and response to treatment for brain disorders. Made up of two seahorse-shaped brain structures, the hippocampus is located at the centre of the brain and plays an important role in memory formation. It is one of the first regions of the brain to show damage from Alzheimer’s and other neurodegenerative diseases and is implicated in epilepsy and major depressive disorder.

The anatomy of the hippocampus differs greatly from person to person, specifically when looking at the way that it folds in on itself.

“The basic issue we are trying to address is that the hippocampus is folded up, but it isn’t folded exactly the same way between two people,” said Jordan DeKraker, Ph.D. student. “The approach that we’re taking is to digitally unfold it so we can more accurately compare abnormalities between patients.”

The technique uses data acquired from magnetic resonance imaging (MRI) to digitally recreate the 3D folds into a 2D structure—essentially ironing out the wrinkles.

The paper describing the promise of this technique was published in the journal Trends in Neurosciences and is the culmination of DeKraker’s Ph.D. work at Western’s Schulich School of Medicine & Dentistry under the supervision of Ali Khan and Stefan Köhler.

“It’s difficult to pinpoint one part of the hippocampus in one person, and find the corresponding part in another person because of the variability from person to person in this folding,” said Köhler, professor of psychology and principal investigator at the Brain and Mind Institute. “Being able to do that is relevant when dealing with clinical questions because you have to consider what is part of normal variability versus what is unique to clinical abnormalities. It’s at that level that this technique will really help in the future.”

The team began to develop this technique after looking at imaging data from patients acquired using the ultra-high-field MRI located at Robarts Research Institute, one of the most powerful MRI magnets in North America, producing images of the brain in super high resolution. These images allowed them to see the differences in folding patterns between patients that couldn’t be seen with lower-resolution imaging.

Next, the team is developing a web-based app that would allow clinicians and researchers to input their imaging data and uses artificial intelligence to unfold the hippocampus in the same way.

“For epilepsy, this might be useful to provide a high-resolution approach to help a surgeon determine which site of the brain to treat, resect or implant electrodes,” said Khan, assistant professor at Schulich Medicine & Dentistry, Canada Research Chair in Computational Neuroimaging, and scientist at Robarts Research Institute.

Could your mask be a kind of vaccine against COVID-19?