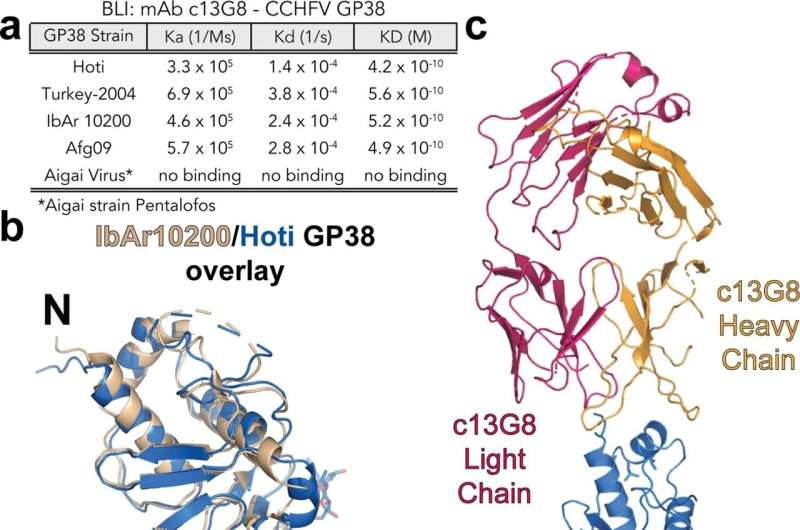 A research team led by the University of California, Riverside, has discovered important details about how therapeutically relevant human monoclonal antibodies can protect against Crimean Congo Hemorrhagic Fever virus, or CCHFV. Their work, which appears in the journal Nature Communications, could lead to the development of targeted therapeutics for infected patients.

An emerging zoonotic disease with a propensity to spread, CCHF is considered a priority pathogen by the World Health Organization, or WHO. CCHF outbreaks have a mortality rate of up to 40%. Originally described in Crimea in 1944–1945, and decades later in the Congo, the virus has recently spread to Western Europe through ticks carried by migratory birds.

The disease is already endemic in Africa, the Balkans, the Middle East, and some Asian countries. CCHFV is designated as a biosafety level 4 pathogen (the highest level of biocontainment) and is a Category A bioterrorism/biological warfare agent. There is no vaccine to help prevent infection and therapeutics are lacking.

Scott D. Pegan, a professor of biomedical sciences in the UCR School of Medicine, collaborated on this study with the United States Army Medical Research Institute of Infectious Diseases, or USAMRIID, which studies CCHFV because of the threat it poses to military personnel around the world. They examined monoclonal antibodies, or mAbs, which are proteins that bind to antigens—foreign substances that enter the body and cause the immune system to mount a protective response.

In a previous publication, USAMRIID scientists Joseph W. Golden and Aura R. Garrison reported that an antibody called 13G8 protected mice from lethal CCHFV when administered post-infection. They provided Pegan with the sequence information for that antibody, clearing the way for UCR to “humanize” it and conduct further research.

“The USAMRIID study showed that the mouse mAb, 13G8, helps the immune system clear the infection,” Pegan said. “We knew 13G8 binds to a viral glycoprotein called GP38, but it wasn’t clear where that binding took place. So we analyzed the structure to gain an understanding of how it works and pinpoint exactly where the binding occurs. This knowledge sheds light on the potential of these mAbs to be effective against a broad range of CCHF viral strains.”

Members of Pegan’s research team were also able to obtain serum from patients who contracted CCHF in Turkey. The researchers isolated seven mAbs from a CCHFV survivor and identified two new antigenic sites on GP38. They then solved the structure of GP38 bound to one of the seven non-neutralizing human antibodies, in addition to 13G8. Knowledge of the structure of this complex can confer a clinical benefit as well, according to the authors.

“This structural information further characterizes GP38 as an antigen of interest for vaccination studies, while also advancing mAb development toward CCHFV,” Garrison said. “The therapeutic role for non-neutralizing antibodies in preventing disease is becoming more evident for high-risk pathogens such as Ebola, Lassa, and Nipah virus.”

Pegan explained that CCHFV has a tri-segmented RNA genome, consisting of a large, medium, and small segment. In 2006, GP38 was identified as a component of the medium fragment by the Special Pathogens Branch at the Centers for Disease Control and Prevention, or CDC, which also contributed to the Nature Communications study. The function of GP38 and its role in CCHFV infection remain unclear.

“We know that targeting GP38 stops CCHFV’s progression, but no one is fully certain about how it works,” Pegan said. “We would like to know more about its mechanism of action so that specific and effective therapeutics can be developed.”

What to Know About Lindsey Graham's Proposed National Abortion Ban