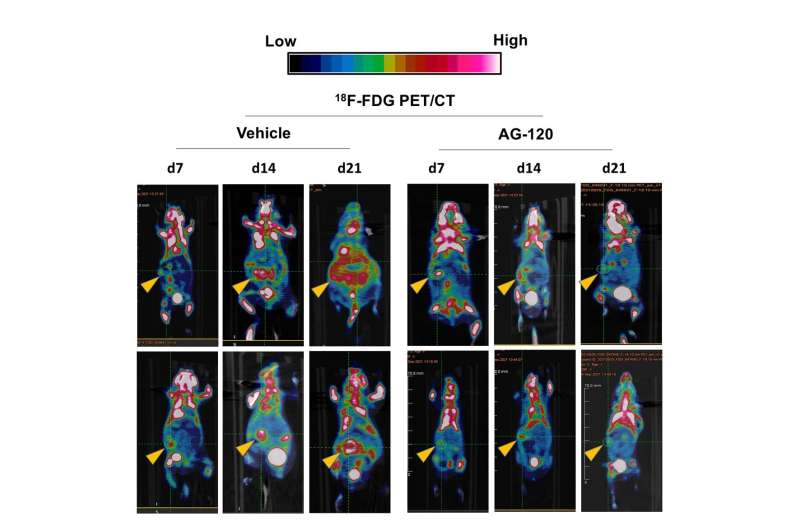 A drug used to target IDH1 mutations in select cancers also appears to inhibit the wild-type form of the enzyme, under certain conditions. This feature explains why a large group of different cancers are vulnerable to the drug. This discovery opens up the possibility that the drug, Ivosidenib or AG-120, could become more broadly applicable against a variety of cancers, given that mutant IDH1 is present in just 1% of cancers. The findings were recently published in Nature Cancer.

“Historically, only a few groups have cared about wild-type IDH1,” said Jordan Winter, MD, Division Chief of Surgical Oncology at University Hospitals (UH) Seidman Cancer Center and senior author on the study. Dr. Winter is also John and Peggy Garson Family Endowed Chair in Pancreatic Cancer Research and Jerome A. and Joy Weinberger Family Master Clinician in Surgical Oncology. “IDH1 therapeutic investigations have principally focused on the development of mutant IDH1 inhibitors. Less than a handful of reports have focused on wild-type IDH1 inhibition. We showed, along with a few others, that wild-type IDH1 is an important target. We think that Ivosidenib, previously called AG-120, may be applicable to the large majority of cancers–the one percent with mutant IDH1 and the remaining 99% with wild-type IDH1.”

Fundamental to this discovery is the observation that cancer cells rely on IDH1 metabolism to thrive in a harsh and nutrient-deprived tumor microenvironment. Nutrient limitation universally present in pancreatic tumors could open a new therapeutic window, explains the study’s first author Ali Vaziri-Gohar, Ph.D., Postdoctoral Fellow in the Department of Surgery at Case Western Reserve University School of Medicine.

“Wild-type IDH1 activity is a metabolic requirement for cancer cells living in a harsh metabolic milieu,” he said. “We found that IDH1 is very important for cancer cells’ survival in a stressful microenvironment. When the cancer cells have less oxygen and less glucose or glutamine, anything that hurts them, they need a defense mechanism to protect them, which is this important molecule IDH1.”

In laboratory experiments, Dr. Winter, Dr. Vaziri-Gohar, and colleagues demonstrated that genetically suppressing IDH1 reduced growth of pancreatic cancer cells in cell culture under low nutrient conditions and in mouse models of pancreatic cancer. They found, too, that the FDA-approved inhibitor of mutant IDH1, Ivosidenib, was surprisingly potent against the wild-type form of the protein–especially when paired with the important condition of low magnesium. This latter point had been overlooked in prior studies.

Dr. Vaziri-Gohar said that this finding was a bit of scientific serendipity.

“Initially, we were using this drug as a negative control,” he explained. “Then we found we can use this drug against cancers that have wild-type isoforms if we reduced levels of magnesium. We tested this hypothesis in cell culture and saw that when the magnesium levels reduced in the tissue culture, they responded to the inhibitor with and lowered activity of the enzyme.

“This in turn decreased cancer cell survival. However, under the normal cell culture conditions with standard magnesium levels found in the blood or culture media, they didn’t respond to this drug. We then realized that magnesium levels were much lower in tumors than in standard culture conditions, so that the drug was actually effective against pancreatic and other cancers when given to animals harboring these tumors.”

Drs. Winter and Vaziri-Gohar have now tested Ivosidenib in mouse models of pancreatic, colorectal, ovarian and lung cancer, as well as melanoma. In each of these instances, the anti-tumor effect of Ivosdenib was comparable or superior to a previous study of anti-IDH1-mutant tumor therapy. Other drugs developed as mutant-IDH1 inhibitors similarly were effective against tumors without the mutation.

In the immunocompetent mouse pancreatic cancer model, Ivosidenib improved median survival by more than two fold. It was also important to the study that these findings were replicated in a completely separated lab, in an experiment performed on the other side of the Atlantic Ocean. A respected mouse model researcher, Dr. Jennifer Morton of the Beatson Institute in Scotland, performed this experiment in a genetically engineered mouse that develops pancreatic cancer.

The next step in the team’s research is a clinical trial. Along with his colleague Dr. David Bajor, Dr. Winter plans to enroll 15 patients with resectable pancreatic cancer in a Phase I trial of Ivosidenib in combination with standard of care, FOLFIRINOX. Patients will receive three months of treatment prior to surgery, gauging their response to therapy via imaging, biochemical blood markers and ultimately through pathology once surgery is complete.

“The primary endpoint is just to determine safety of the drug with the existing chemotherapy regimen, because it’s never been given together,” Dr. Winter, who is also a professor in the Department of Surgery at Case Western Reserve School of Medicine and Member of the Developmental Therapeutics Program at Case Comprehensive Cancer Center, explained.

“We’re going to compare it to patients who get chemotherapy prior to surgery without the Ivosidenib. However, one of the great things about this trial is that because all of the patients are going to be undergoing surgery, we are going to have all the tumors to analyze and we will be able to assess the tumors for the same metabolic changes previously observed in the lab. We’re going to be looking at those same data points, those same markers of response in the patients’ tumors to try to demonstrate the biologic activity inside pancreatic cancer in the patients.”

Dr. Vaziri-Gohar says he’s thankful for the spirit of collaboration across institutions that has allowed the project to progress to this point.

“Beyond the science, it was so gratifying to work with so many people towards a common goal,” he said. “That’s the most important thing to me. That we worked as a team and hopefully our discovery will help patients. We are so lucky that we have all of these researchers and institutions involved.”

Dr. Winter is optimistic about what might be achieved.