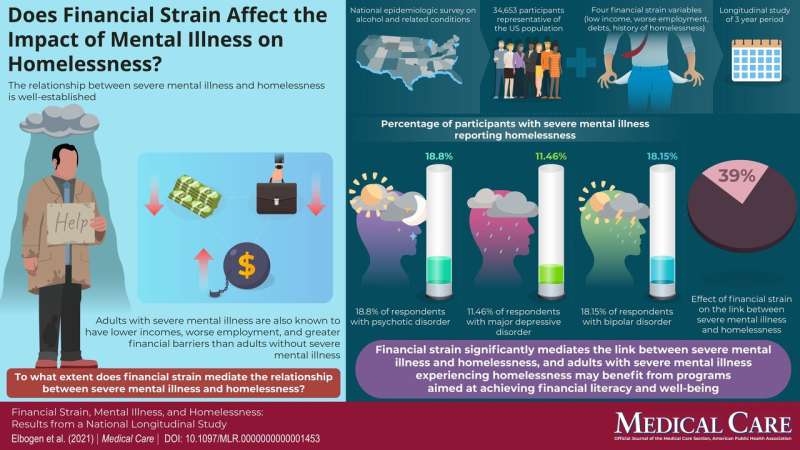 Financial strains like debt or unemployment are significant risk factors for becoming homeless, and even help to explain increased risk of homelessness associated with severe mental illness, reports a study in a supplement to the April issue of Medical Care.

Using data on nearly 35,000 participants in a nationally representative longitudinal survey, Dr. Elbogen and colleagues analyzed financial strain as a predictor of homelessness, on its own and in combination with mental illness. Responses to a 2001-02 survey were analyzed to identify factors associated with homelessness at a follow-up survey in 2004-05.

“Conversely, participants with all four financial strain variables had significantly higher risk of homelessness,” Dr. Elbogen and coauthors write. The risk of becoming homeless increased with each additional type of financial strain, independent of mental illness.

The findings offer a “fresh perspective” on homelessness prevention efforts, the researchers write. “nterventions could be proactively targeted at improving an individual’s financial literacy and well-being such that they could prevent situations that may contribute to future homelessness.”

The finding that financial strain accounts for part of the impact of severe mental illness “suggests that addressing mental illness without consideration of financial strain may not lead to optimal reduction in homelessness risk,” Dr. Elbogen and colleagues add. The study supports efforts to help homeless individuals grow financially through employment, increased financial knowledge, and money management skills—as offered in effective interventions such as Housing First and VA homeless programs.

The special supplement to Medical Care focuses “on the intersection of homelessness, medical illnesses, and related social factors,” according to an introductory guest editorial by Jack Tsai, Ph.D., of the VA National Center on Homelessness and University of Texas Health Science Center at Houston and colleagues. A key focus is on the rising rates of multimorbidity—having multiple medical, mental health, and substance use disorders—amid the ongoing obesity crisis in an aging population.

Teacher Tips For Surviving School Conferences: 'It Takes a Village'