Home » Health News » Fit to burst: How cancer-exploding viruses are changing the game 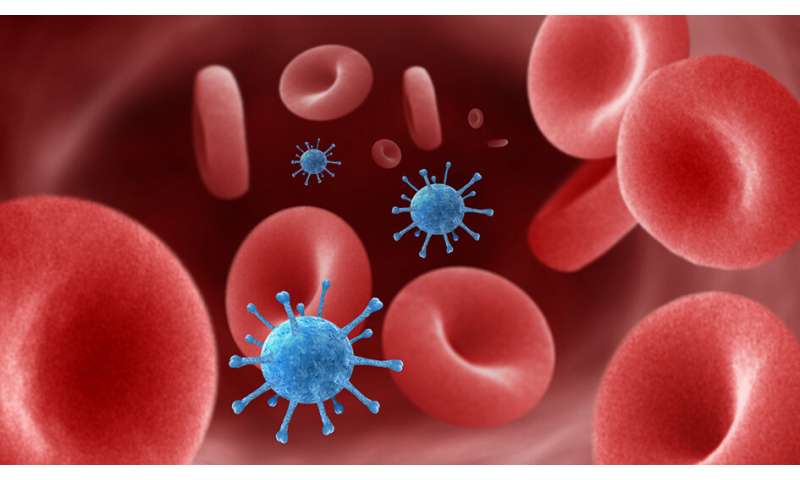 You awake in the middle of the night from a nightmare.

In the nightmare, you are standing in a room that is completely full, floor to ceiling, of balloons. There are red ones, purple ones, yellow ones and green ones.

You’ve been told to burst only the green and purple balloons. Bursting the red or yellow ones will have disastrous consequences.

You have a knife which you use to pop a couple of green ones you see, but each time you pop one, two more appear in its place.

You’re tempted to just stick the knife out and start popping balloons at random, but you know you’ll just hit the red and yellow balloons. And who knows what will happen then?

Trying to tackle complex cancers can be a little like this nightmare. If the green and purple balloons are cancer cells, and the yellow and red ones are healthy cells, you want to be sure that you only pop the balloons that are causing harm.

You can’t resort to an all-out attack because you won’t be selective enough in the harm you are causing.

This dilemma of targeting and tailoring therapies is front-of-mind for the modern cancer researcher. The ICR recently conducted a survey of more than 1,000 cancer patients which found that over one-third of surviving cancer patients have received state-of-the-art targeted drug treatment or immunotherapy

Where aggressive chemotherapies were once the best treatment on offer, their indiscriminate toxicity is no longer acceptable, and patients need kinder, smarter treatments.

Every minute of every day, your immune system is fighting off invaders that get into your body—from the air, from that dodgy sandwich, or from the dust and dirt that finds its way into a paper cut.

The immune system is able to recognize the foreign substance as an intruder, eliminate the problem, alert the rest of the system to its presence, remember the problem and have defenses ready for the next time that it comes along.

This is where immune checkpoint inhibitors come in—they are a block on this block—and the double negative means that your immune system effectively has its blindfold removed, can see the cancer cells, and act on them.

These therapies have proved hugely successful, but only certain patients respond. Those who do best have tumors which are immunologically “hot”—they have lots of immune cells in the vicinity of the tumor which are ready to take action once the therapy is administered.

But what about the patients for whom these therapies don’t work?

Enter the oncolytic virus. From the Greek “onco” (mass or cancer) and “leuin” (to burst), these viruses do exactly what they say on the tin—they burst cancer cells.

Oncolytic viruses can be used in conjunction with immune checkpoint inhibitors to draw immune cells to the tumor—and this is just one way they can be useful.

Professor Kevin Harrington, Professor of Biological Cancer Therapies at the ICR, and Consultant Clinical Oncologist at The Royal Marsden NHS Foundation Trust conducts research into these viruses, and his team are looking into ways that the viruses can kill cancer cells, but also spark the immune system into action against tumors.

He recently authored a review on the optimization of oncolytic virotherapy in cancer treatment, which was published in Nature Reviews Drug Discovery.

Oncolytic viruses are remarkable multi-faceted anti-cancer agents: they can kill cancer cells directly through the process of lysis; they can be engineered to express genes that kill tumor cells directly or raise a red flag to alert the immune system to the tumor’s presence; and they can increase the “immunological heat” within cancers by altering the expression of immune checkpoints and attracting and activating immune cells.

A virus is made of either DNA or a closely related molecule, RNA, wearing a little protein coat and/or a lipid overcoat. Viruses rely on infecting a living cell in order to replicate themselves.

When you catch a virus, such as the common cold, it invades your cells and takes over the machinery of the cell to make copies of itself.

After it does this, the cell bursts, releasing the thousands of virus copies and the cycle starts again.

But the bursting has another effect—it alerts your immune system to the fact that something is wrong.

Think about our nightmare balloon room from earlier. Imagine that the green and purple balloons you need to target are found in clusters together, and when you pop them, confetti spills out. The oncolytic viruses are able to burst these balloons, but have no effect on the red and yellow ones.

If you were to hear a pop and see a shower of confetti in the corner of the room, it would give you a pretty good idea of where you’d need to target next on your popping spree. Alerting the immune system is not so different.

So the oncolytic viruses are able to attract the immune system to cancer cells for attack. But there is another way that they can help when they are used in conjunction with immune checkpoint inhibitor therapy.

The tumor cells rely on producing a protein called PD-1, which binds to another molecule called PD-L1 in order to hide from the immune system. These are what the immune checkpoint inhibitors work on.

Oncolytic viruses encourage cancer cells to produce even more of these substances, meaning there are even more landing sites for the immune checkpoint inhibitor therapy.

This is a game-changer for patients whose tumors have developed resistance to immune checkpoint inhibitors—the viruses can reverse this resistance by telling the cancer cells to make more of the molecules the drugs act on.

We are learning that oncolytic viruses may be particularly attractive partners for combination with immune checkpoint inhibitors and may allow us to increase the number of patients who can benefit from immunotherapy.

All of these mechanisms of action together mean that the oncolytic viruses have huge potential when it comes to cancer treatment—not only can they fight the cancer themselves, they can encourage the immune system to fight with them, and enhance the performance of other cancer treatments along the way.

Another advantage is that viruses are small and easy to manipulate.

Scientists can engineer the DNA or RNA of the virus, and add in genes from other places. They can change the surface of the virus so that it’s easier for it to get inside of cancer cells.

They can also add in something called microRNA. DNA is deoxyribonucleic acid, whereas RNA is simply ribonucleic acid. DNA has the bases Adenine (A), Cytosine (C), Thymine (T) and Guanine (G) – RNA replaces Thymine with the base Uracil (U).

MicroRNA molecules are short strands of RNA which don’t code for anything—meaning they don’t produce any protein. But what they can do is act a little like those plastic plugs you put in the sockets of your house to stop babies from sticking their fingers into them.

A microRNA molecule with a sequence A-U-G-C-G-A for example, is able to bind onto its corresponding sequence on another DNA molecule.

When the double helix of DNA is unzipped and a cell is getting ready to make a protein, the DNA strand has to be fully accessible to the cellular components so that they can move along the molecule, read the DNA sequence and make a protein.

The DNA code is “read” and transcribed into a molecule called messenger RNA. This messenger RNA needs to make its way safely to the ribosome of the cell—a kind of factory where the instructions are decoded and turned into a protein in a process called translation.

But if a microRNA molecule intercepts a messenger RNA molecule before it has a chance to get to the ribosome, it acts like a safety plug. The instructions can’t be translated anymore, and no protein is produced.

Scientists are able to engineer oncolytic viruses to contain sequences which will be acted on by these microRNA molecules—specifically microRNAs found in normal healthy cells. When they do this, the microRNA in healthy cells shuts down protein production of the virus, so the virus has a hard time living inside normal cells.

The cancer cells, on the other hand, don’t contain the matching microRNA molecule for the sequence in the virus, so the virus can reproduce itself freely inside those cells. This minimizes any damage being caused to healthy cells, and maximizes the virus’ effect in the tumor cells.

The cutting edge of modern, targeted cancer therapy is CAR-T cell therapy, or chimeric antigen receptor T-cells. This therapy is created by harvesting immune cells from a patient, engineering them to find and target specific molecules on the surface of a patients’ tumor, and then re-administering them to the patient.

It might sound like science fiction, but it’s in use for certain types of cancer right now.

Oncolytic viruses might be useful in improving it, too. Sometimes, even when a patients’ T-cells are engineered to find the tumor, they are unable to get to it because of the tumor microenvironment—the tissue that immediately surrounds a tumor.

Some tumors have what’s called an extracellular matrix, a network of cells and collagen and other molecules that act like a shield and stop immune cells getting near the cancer, no matter how specific they are. This is particularly bad in pancreatic cancer.

Engineering oncolytic viruses to contain a gene which would blast through this extracellular matrix is another way that they could be used to help treat stubborn cancers. They can help blast through the defenses the tumor has built up, and allow the targeted treatments a path of entry to get to work against the cancer.

As with all modern cancer therapies, the ideal would be to take each patient and each cancer on a case-by-case basis. There is lots of work to be done on oncolytic viruses, but they hold huge hope.

The ICR and Royal Marsden played a central role in the development of T-VEC, with involvement in the phase I, II and III clinical trials. Professor Kevin Harrington was also invited to both the EMA and NICE hearings that resulted in the approval of T-VEC in Europe and its funding through the NHS.

They could go a long way towards benefiting a large, currently under-served population of patients whose cancers need a push to respond to cutting-edge treatments like immune checkpoint inhibition.

So perhaps our earlier nightmare of a room full of balloons doesn’t need to be such a challenge after all. Oncolytic viruses could help us adjust the tools already at our disposal to tackle cancer cells, and recruit in the immune system to help along too.