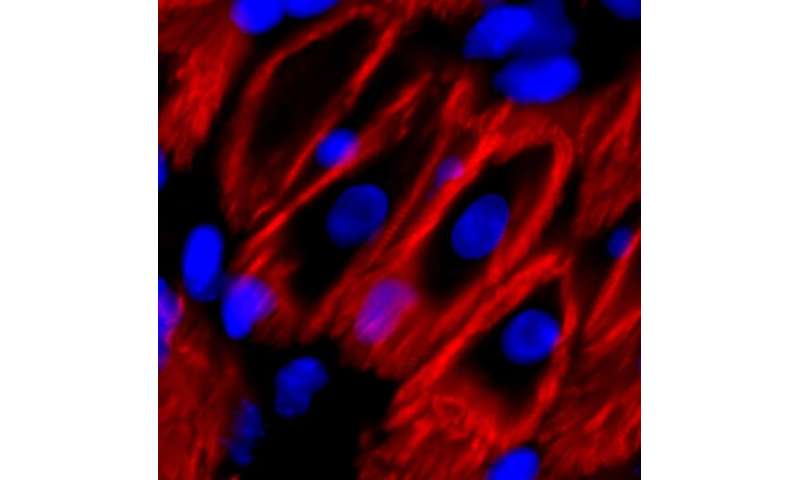 UT Southwestern Medical Center scientists have discovered a protein that works with others during development to put the brakes on cell division in the heart, they report today in Nature. The findings could eventually be used to reverse this developmental block and help heart cells regenerate, offering a whole new way to treat a variety of conditions in which heart muscle becomes damaged, including heart failure caused by viruses, toxins, high blood pressure, or heart attacks.

Nine years ago, Sadek and his colleagues discovered that mouse hearts can regenerate if they’re damaged in the first few days of life, spurred by the division of cardiomyocytes, the cells responsible for a heart’s contractile force. However, this capacity is completely lost by 7 days old, an abrupt turning point in which division of these cells dramatically slows and the cells themselves enlarge. The reasons why these cells gradually slow and stop dividing has been unclear.

Sadek and his team discovered in 2013 that a protein called Meis1, which falls into a category known as transcription factors that regulate the activity of genes, plays a key role in stopping heart cell division. However, he explains, although deleting this gene in mice extends the window of heart cell division, this effect is transient—heart cells missing this gene eventually slow and stop their multiplication.

Consequently, the researchers wondered whether there were redundant mechanisms in place that stop heart cell division even when Meis1 is absent. Toward that end, they looked to see what other transcription factors might track activity with Meis1 in heart cells as they rapidly divide and then slow to a halt in the days after birth. They quickly discovered one called Hoxb13 that fit the bill. Other proteins in the Hox family, Sadek notes, have been shown to act as chaperones to Meis1 in other types of cells, ferrying Meis1 into the cell nucleus.

To better understand Hoxb13’s role in heart cells, the researchers genetically engineered mice in which the gene that codes for Hoxb13 was deleted. These mice behaved much like those in which just the gene for Meis1 was deleted—the window for heart cell rapid division was increased but still closed within a few weeks. When the researchers shut off Hoxb13 in adult mouse hearts, their cell division had a brief resurgence, enough to prevent progressive deterioration after an induced heart attack but not enough to promote significant recovery.

However, when the researchers deleted both the genes for Meis1 and Hoxb13, heart cells in these mice appeared to revert to an earlier stage in development, both decreasing in size and multiplying more. After an induced heart attack, these mice had a rapid improvement in the amount of blood each beat could expel from the heart. Their heart function had almost returned to normal.

With clear evidence that Meis1 and Hoxb13 work together to stop heart cell division in the days after birth, Sadek and his colleagues looked for what might in turn regulate these proteins. Their experiments suggest that the answer is calcineurin, a protein that’s responsible for regulating the activity of other proteins by removing their phosphate groups.

Because calcineurin plays a key role in a variety of diseases and other medical conditions, such as rheumatic arthritis, schizophrenia, diabetes, and organ transplant, several drugs already exist on the market that target this protein. Conceivably, says Sadek, other drugs could be developed to directly target Meis1 and Hoxb13. Researchers may eventually be able to develop strategies to restart heart cell division through a single drug or combinations that target any part of this regulatory pathway, he adds.