Running a marathon could add years to your life by reversing the effects of ageing on your blood vessels, a study has found.

Dozens of first-time London Marathon runners had their health tracked before they began a rigorous six-month training plan.

Scientists discovered the arteries of the volunteers were less stiff three weeks after completing the marathon than before training.

MRI scans showed the largest vessel in the body – the aorta – had an ‘aortic age’ of around four years younger than when they started.

The severity of both can largely be prevented with a healthy lifestyle, and running is arguably one of the easiest ways to take up exercise.

Circulatory health often declines as a natural part of ageing but can be ‘reversed’ by running, the researchers said. 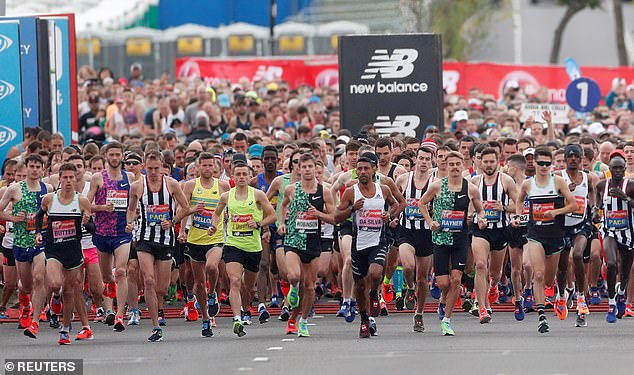 Running a marathon could add four years to your life by reducing the stiffness of arteries, a study on participants of the London Marathon has found

Before they started training and three weeks after completing the marathon, they had MRI and ultrasound scans of their hearts and blood vessels.

The biological age of the aorta, the largest artery in the body, was calculated at both time points in three different places.

After completing the marathons, aortic stiffness had reduced. It was most pronounced in the distal aorta – the furthest section from the heart – which appeared four years younger than before training.

As well as MRIs of their vessels, the participants had their blood pressure measured before training and three weeks after the race.

Ideal blood pressure is considered to be between 90/60mmHg and 120/80mmHg, according to the NHS.

HOW MUCH EXERCISE DO YOU NEED TO DO?

To stay healthy, adults aged 19 to 64 should try to be active daily and should do:

A good rule is that 1 minute of vigorous activity provides the same health benefits as 2 minutes of moderate activity.

One way to do your recommended 150 minutes of weekly physical activity is to do 30 minutes on 5 days every week.

All adults should also break up long periods of sitting with light activity.

Benefits were greater among slower, older males who had higher blood pressure to start with.

Senior author Dr Charlotte Manisty said: ‘Our study shows it is possible to reverse the consequences of ageing on our blood vessels with real-world exercise in just six months.

‘These benefits were observed in overall healthy individuals across a broad age range and their marathon times are suggestive of achievable exercise training in novice participants.’

Aortic stiffening, a normal part of ageing, is when the walls of the arteries become thicker and elastic tissue within the walls decays.

Some people with stiff arteries may also have high blood pressure. But it is not clear which condition comes first.

The NHS recommends at least 150 minutes of moderate aerobic activity such as running every week, as well as strength exercises twice a week.

This study suggests running may be a cheap and easily accessible way of sticking to guidelines and boosting circulatory health.

A good diet, sleep routine and supplements for training may have also played a role in the health of the participants improving.

Although entries for the 2020 London Marathon have closed, thousands of other marathons and races from 5km to 10km take place ever year.

All of the study participants were recommended to follow the ‘Beginner’s Training Plan’ provided by the the London Marathon.

The plan consists of approximately three runs per week that increase in difficulty for a 17-week period. However, the researchers did not discourage participants who wished to train using a different plan.

Dr Manisty said: ‘As clinicians are meeting with patients in the new year, making a goal-oriented exercise training recommendation such as signing up for a marathon or fun-run may be a good motivator for our patients to keep active.

‘Our study highlights the importance of lifestyle modifications to slow the risks associated with ageing, especially as it appears to never be too late as evidenced by our older, slower runners.’

Dr Julio Chirinos, at the University of Pennsylvania, who wasn’t involved in the study, said it adds to existing evidence on the benefits of exercise at all ages.

He said: ‘Despite some limitations, including its observational nature, the study adds to the body of evidence supporting the beneficial effects of exercise on multiple ageing phenotypes.

‘Given the profound implications of arterial stiffness for human health, this study is important.’

He added that it ‘should stimulate further research to identify potential molecular mechanisms by which exercise reduces aortic stiffness’.

Bowel cancer symptoms: Three ‘sudden shifts’ in your bowel habits that can be a sign