The number of elderly suffering from Alzheimer’s disease has been rapidly rising over the past decades. For a long time, scientists believed that misfolded aggregates of amyloid-beta protein accumulate and form plaques in the brain, leading to memory loss and neuronal death. However, the recent failures of the clinical trials indicate the pressing need to understand the missing link between amyloid-beta protein plaques and the disease’s symptoms, a phenomenon that has been studied for over decades.

Researchers led by Director C. Justin Lee from the Center for Cognition and Sociality within the Institute for Basic Science (IBS), South Korea, have delved extensively into this topic. Recently in 2020, the group published in the journal Nature Neuroscience that the star-shaped cells in the brain, called astrocytes, are greatly involved in Alzheimer’s Disease and its progression. Driven by this discovery, the group sought to further explore the molecular connection underlying the astrocytic response.

After studying basic cellular pathways and how they change in the star-shaped astrocytes of the brain, the IBS team now has found the missing link: the conversion of amyloid-beta to urea in the brain.

The urea cycle is widely studied and understood as a major metabolic pathway in the liver and kidneys, as a part of our digestive and excretory processes. In the liver, the urea cycle converts ammonia, a toxic product from protein digestion, into urea, which is easily excreted by our kidneys as urine. Surprisingly, previous studies have reported increased urea in the brain of Alzheimer’s patients, which led the IBS team to wonder if the urea cycle played any role in the pathology of the disease. To their surprise, they found that the urea cycle is ‘switched on’ in the astrocytes of the Alzheimer’s disease brain, in order to clean up the toxic amyloid-beta aggregates and remove them in the form of urea.

However, this isn’t as beneficial as it sounds. The group found that the switching on of the urea cycle causes the production of ornithine, another metabolite that accumulates in the cell and needs to be cleaned up. The hardworking astrocytes produce the enzyme ornithine decarboxylase 1 (ODC1) in this condition to deal with the accumulated ornithine and convert it to putrescine. This consequently increases the levels of neurotransmitter γ-aminobutyric acid (GABA), as well as toxic byproducts like hydrogen peroxide (H2O2) and ammonia in the brain. 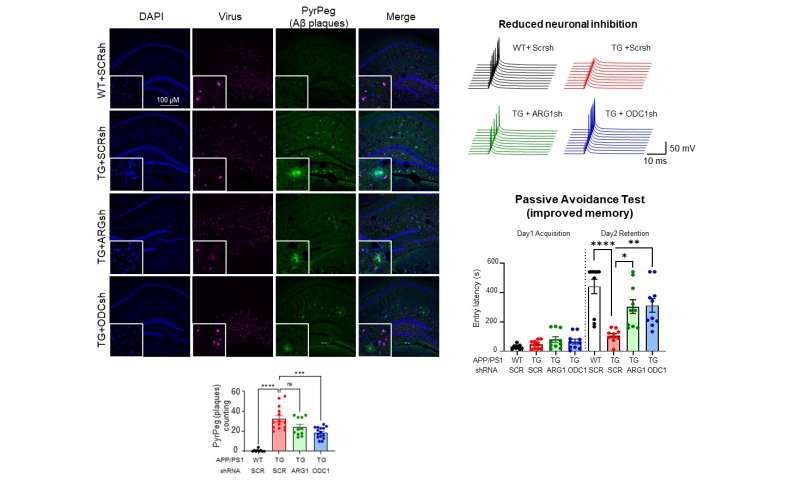 This ammonia further feeds back into the urea cycle and continues this process, causing more and more accumulation of toxic byproducts. High levels of GABA released by these astrocytes play an inhibitory action on neuronal transmission, contributing to the tell-tale loss of memory in Alzheimer’s disease.

In the above-mentioned 2020 study by the group, hydrogen peroxide was found to be the primary factor causing the severe reactivity of diseased astrocytes, causing neuronal cell death. Now, the new findings from this study precisely explain how the increased GABA, H2O2, and ammonia contribute to and exacerbate the loss of memory and neuronal cell death associated with Alzheimer’s Disease.

The first author Ju Yeon Ha stated that “for years, scientists have been debating about the beneficial and detrimental role of reactive astrocytes, and with the findings of this study, our group is able to clearly demarcate the beneficial urea cycle and the detrimental conversion of ornithine to putrescine and GABA, thereby providing evidence of the dual nature of astrocytes in Alzheimer’s disease brain.”

The group experimented further to exploit this new knowledge. They found that astrocyte-specific gene silencing of the enzyme Ornithine Decarboxylase 1 in a transgenic Alzheimer’s disease mouse model was able to stop the excessive GABA production and neuronal inhibition in the hippocampus of the mouse brain. These animals performed better in memory-related behavioral tasks, almost completely recovering from the AD-associated loss of memory after ODC1 knockdown. Additionally, the number of amyloid-beta plaques was significantly fewer in ODC1-gene silenced mouse brains, indicating that the urea cycle was working more efficiently to clear the accumulated protein without causing the accumulation of harmful byproducts such as H2O2, GABA and ammonia.

Lee, the corresponding author of the study remarked that “with the results from this study, we were able to finally delineate the pathway linking amyloid-beta plaques to astrocytic reactivity, uncovering the presence of a functional urea cycle in reactive astrocytes for the first time. We also found increased levels of enzyme ODC1 in human AD patients’ brains, raising the possibility of translating the results from our mouse study to humans and indicating that ODC1 may be a novel and powerful therapeutic target against the disease, inhibition of which could clear amyloid-beta plaques as well as improve memory.”

Q&A: The pandemic’s next few months could be the hardest. A researcher explains why

Can we trust industry-funded cholesterol research?