Can a meal in a tub ever be healthy? How the instant snack for students got a makeover with wholegrains and vegetables

Instant noodle pots have been a cheap student staple since they were introduced more than 40 years ago. But just-add-boiling-water snacks have received a makeover and there are now versions that contain ‘healthy’ ingredients such as vegetables, wholegrains and beans.

It’s all a far cry from 2002, when Pot Noodle embraced its low-end image by advertising itself as ‘the slag of all snacks’ (the tagline was subsequently banned).

But can a noodle pot ever be a healthy choice? Anglea Dowden asked dietitian Helen Bond to assess some; we then rated them. 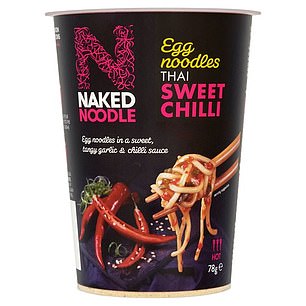 Naked Noodle Sweet Chilli scored a three out of ten

‘Healthy’ bit: ‘A source of protein’ and no artificial colours or preservatives.

Expert Verdict: Despite the ‘naked’ label suggesting wholesomeness, the only positive here is that the egg noodles provide 9.6g of protein — just under a fifth of the 50g needed daily for the repair of muscles and tissues, and it will help you feel full.

It may be low in fat but it provides nearly two-and-a-half teaspoons of added sugar — quite a lot towards the daily limit of seven teaspoons.

The tiny amounts of dried red pepper and spring onion won’t add much nutrition-wise, nor count towards your five-a-day. This pot also has 31 per cent of your daily salt limit, which is a lot for a snack or light meal. 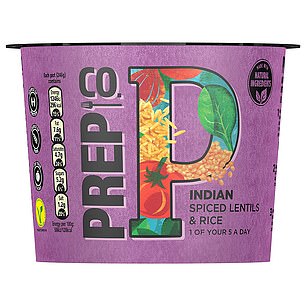 ‘Healthy’ bit: Low in fat, a source of protein and fibre, and one of your five-a-day.

Expert Verdict: This is 11 per cent vegetables — more than the other pots. Together, the lentils and veg count as one of your five-a-day.

It’s likely that dehydrating the vegetables will have reduced some of the vitamins, such as C and A, which contribute to healthy skin and a strong immune system, but it’s a good source of fibre, with about a quarter of your daily needs. It’s also one of the best pots for protein, with 12g — about the same as in 50g chicken (half a small breast), so it will keep you fuller for longer. The salt content is modest, although the palm fat means it has close to a quarter of your daily intake of saturated fat. 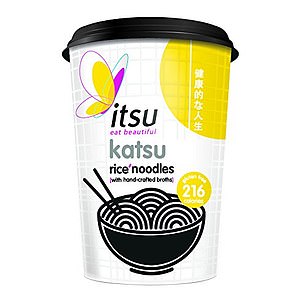 Itsu Katsu Rice Noodles scored one out of ten

‘Healthy’ bit: ‘Eat Beautiful’ is the tagline; it claims to be gluten-free, low in fat and low in sugar.

Expert Verdict: This rice noodle pot is flavoured with a soybean paste broth, soy sauce and bonito extract (a fish related to tuna), but sadly bonito extract doesn’t retain the omega-3 benefits of the whole fish. Nor do the famed isoflavones in soya (linked with protection against age-related diseases) feature much here — the quantity of soy bean paste is simply too small.

The only veg is a sachet of dried spring onion and there’s a lot of salt: 38 per cent of your daily limit. Despite the low-sugar claim, this still has about a teaspoon of added sugar — bad for your teeth and your waistline. 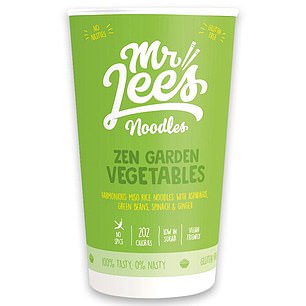 ‘Healthy’ bit: A source of protein, low in sugar, ‘freeze-dried ingredients to ensure product locks in most of the nutrients’.

Expert Verdict: Freeze-dried asparagus, green beans, spinach and cauliflower will (due to being treated at lower temperatures) generally contain more vitamins than the dehydrated kind you’d normally find in a noodle pot, but there’s still not enough —just 7 per cent of the pot — to count towards your five-a-day. This contains miso, a source of good bacteria, as well as manganese, vitamin K and zinc, but again, there’s not a lot of it. Rice noodles mean this is suitable for those with coeliac disease or gluten sensitivities, but they are not as high in fibre and protein as wheat noodles. The 3g salt is half your daily limit. 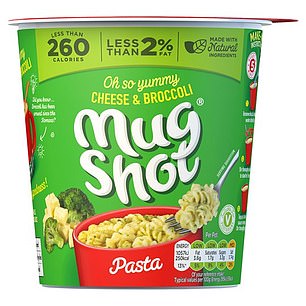 ‘Healthy’ bit: Low in saturated fat, made from natural ingredients, less than 2 per cent fat.

Expert Verdict: This sounds promising but has a teeny 0.8 per cent dried broccoli. Cheese powder makes up 3.5 per cent, but cheese powder is normally a concoction of ingredients including whey, vegetable oil and flavouring, so it won’t offer much calcium.

In essence the pot is just a portion of white pasta, a complex starch that will provide energy, but in the long term is linked with unhealthy blood sugar spikes. With a bit of extra cheese grated in to boost protein levels, it could work as a pre- or post-workout snack. 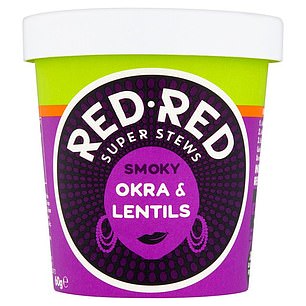 Expert Verdict: The 50 per cent lentils will provide filling protein and slow-release carbs that help keep energy levels even, so you don’t get hungry again too quickly. The tomato provides lycopene, which is linked to a lower risk of cardiovascular disease. 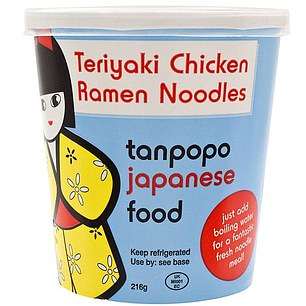 Tanpopo Teriyaki Chicken Ramen Noodles scored one out of ten

‘Healthy’ bit: Provides ‘all the nutritional benefits of its fresh salad and vegetable ingredients’.

Expert Verdict: You add hot water to these wheat-flour noodles just as with the rest, but the pot is sold from the fridge. This might make it feel somehow healthier, but the nutritional information shows it’s not. In fact, this has the highest salt of all the products in our review — nearly three quarters of your daily limit, mainly from the bonito and soy sauce. That’s the same as in nine 32.5g bags of ready salted crisps. The sugar content is the highest, too — around two-and-a-half teaspoons, most of it added — while the fibre content is lowest, about the same as in one slice of white bread. It’s good for protein from the chicken, but otherwise of little nutritional value. 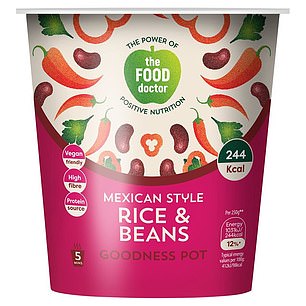 ‘Healthy’ bit: ‘High-fibre’ and ‘a source of protein’.

Expert Verdict: This is made with dehydrated wholegrain rice, kidney beans, bell pepper and tomato, all good sources of fibre for a healthy bowel. The 8g of fibre (27 per cent of your daily intake) also comes from inulin, an added fibre. ‘Good’ gut bacteria like to feed on inulin, which helps them thrive and potentially reduces the risk of bowel cancer. The downside? Inulin is troublesome if you have a sensitive gut. But if not, tuck in: the beans and grains provide as much protein as a large egg. Kidney beans contain iron, to help protect you against anaemia. 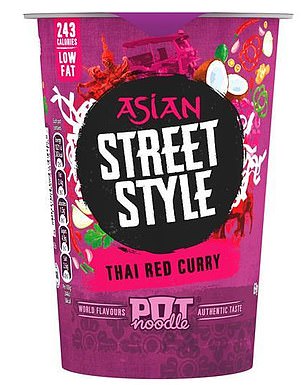 Expert Verdict: This contains coconut milk powder, which makes the saturated fat content slightly higher than most, at 8 per cent of the daily limit, and a sprinkling of red and green peppers and green beans that provide a bit of colour and texture rather than any meaningful nutrition. It’s lower-calorie than a healthy meal would normally be, but it could be an occasional snack on an active day or, with a piece of fruit, a slimline lunch. The salt content isn’t healthy at 2.6g — 43 per cent of your daily limit — but the sugar, at just over a teaspoon, is one of the lower levels in our roundup.

New tools and resources available for persons living with dementia

A fast, low-cost method to detect COVID-19 infection from a pool of samples