Visceral fat is often referred to as belly fat and is highly dangerous due to its location in the body. Active compounds isolated from herbs are similar with the practice of traditional Chinese medicine, which has a holistic approach that can target several organs and tissues in the whole body. Herbs such as chilli peppers have shown positive results when it comes to helping burn belly fat. How?

Researchers at Canada’s Laval University suggest that a key chemical contained in chillies could boost the body’s ability to burn fat and curb one’s appetite all in all helping to get rid of visceral fat.

Capsaicin is the chemical that gives chillies and chilli-based spices such as cayenne and paprika their characteristic pungency and also stimulates a natural process whereby some of the food we eat at each meal is converted immediately to heat.

Known as diet-induced thermogenesis, this process helps to burn belly fat because it means a person burns up calories automatically rather than storing them.

Scientists have found that diet-induced thermogenesis usually uses up carbohydrates, with various studies showing that we produce more heat after a high-carbohydrate meal. 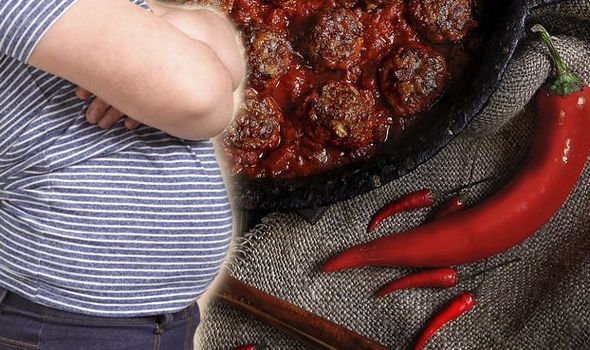 In addition to boosting metabolism, capsaicinoid supplements have been shown to reduce visceral fat and appetite so that people can eat 50 – 75 fewer calories per day.

All these factors help explain why regularly consuming these spicy foods is associated with a significantly reduced risk of becoming overweight or obese over time.

In a study published in the US National Library of Medicine National Institutes of Health, dietary capsaicin and its anti-obesity potency was further investigated.

“Capsaicin, a major active compound from chili peppers, has been clearly demonstrated for its numerous beneficial roles in health,” noted the study.

It added: “Capsaicin, as a major active compound from chili pepper, has been established for its numerous beneficial roles in the human organism.

“Epidemiological data revealed that the consumption of foods containing capsaicin was associated with a lower prevalence of obesity.” 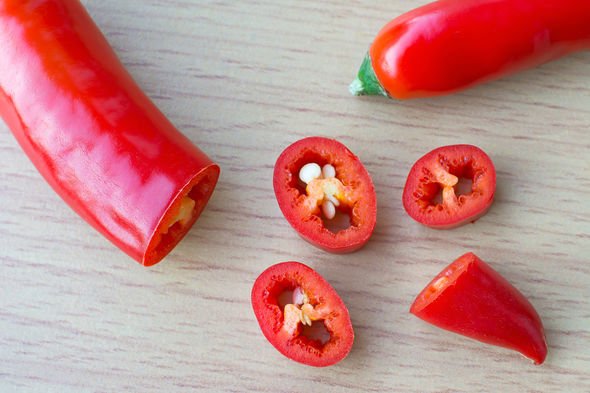 In one double-blind, randomised and placebo-controlled trial, it indicated that treatment of overweight or obese subjects with 6 mg/day capsinoid for 12 weeks was associated with abdominal fat loss.

Body weight was also decreased as 0.9 and 0.5 kg in the capsinoid and placebo groups respectively.

The study concluded that capsaicin plays a critical role in human and has multiple benefits for metabolic health, especially for weight loss in obese individuals.

“More importantly, no adverse effects with capsaicin were observed in most studies,” added the study.

“Thus, chilli peppers and capsaicin are safely and easily applicable to our daily life.”

Other studies, reported in the British Journal of Nutrition, have also revealed that when men and women eat chilli-spiked food, they feel less hungry and eat significantly less at subsequent meals.

Intriguingly, the researchers have also found that adding chilli powder to food tricks people into thinking that the meal contains more fat than it actually does.

Scientists have also found that for obese or previously obese people, this preference is even more pronounced, making passing up fat-laden food even harder.

On top of adding more chilli peppers to your diet, ensuring you are getting at least 150 minutes of physical activity a week will help to burn belly fat.