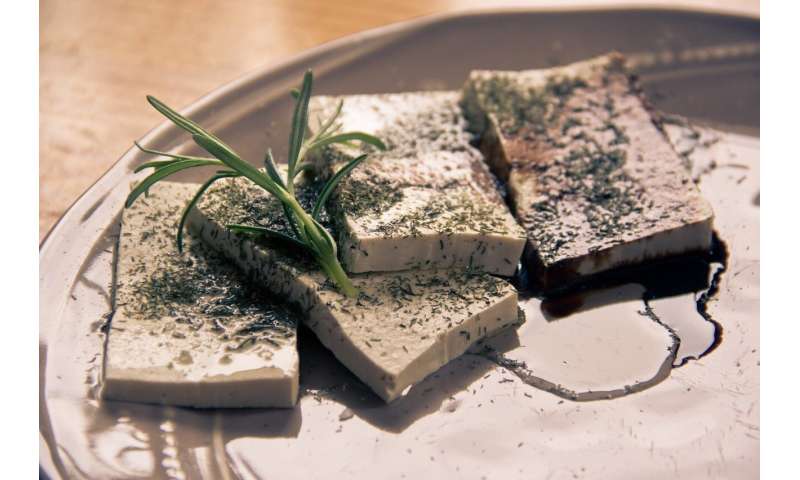 Eating tofu and foods that contain higher amounts of isoflavones was associated with a moderately lower risk of heart disease, especially for younger women and postmenopausal women not taking hormones, according to observational research published today in Circulation, the flagship journal of the American Heart Association.

Researchers at Harvard Medical School and Brigham and Women’s Hospital analyzed data from more than 200,000 people who participated in three prospective health and nutrition studies; all participants were free of cancer and heart disease when the studies began. After eliminating a number of other factors known to increase heart risk, investigators found:

“Despite these findings, I don’t think tofu is by any means a magic bullet,” said lead study author Qi Sun, M.D., Sc.D., a researcher at Harvard’s T.H. Chan School of Public Health in Boston. “Overall diet quality is still critical to consider, and tofu can be a very healthy component.”

Tofu, which is soybean curd, and whole soybeans such as edamame are rich sources of isoflavones. Chickpeas, fava beans, pistachios, peanuts and other fruits and nuts are also high in isoflavones. Soymilk, on the other hand, tends to be highly processed and is often sweetened with sugar, Sun noted. This study found no significant association between soymilk consumption and lower heart disease risk.

“Other human trials and animal studies of isoflavones, tofu and cardiovascular risk markers have also indicated positive effects, so people with an elevated risk of developing heart disease should evaluate their diets,” he said. “If their diet is packed with unhealthy foods, such as red meat, sugary beverages and refined carbohydrates, they should switch to healthier alternatives. Tofu and other isoflavone-rich, plant-based foods are excellent protein sources and alternatives to animal proteins.”

In the study, researchers analyzed health data of more than 74,000 women from the Nurses’ Health Study (NHS) from 1984 to 2012; approximately 94,000 women in the NHSII study between 1991 and 2013; and more than 42,000 men who participated in the Health Professionals Follow-Up Study from 1986 to 2012. All participants were free of cardiovascular disease and cancer at the beginning of each study. Dietary data was updated using patient surveys, conducted every two to four years. Data on heart disease was collected from medical records and other documents, while heart disease fatalities were identified from death certificates.

A total of 8,359 cases of heart disease were identified during 4,826,122 person-years of follow-up, which is the total number of years that study participants were free of heart disease and helps to measure how fast it occurs in a population.

Sun emphasized that the study should be interpreted with caution because their observations found a relationship but did not prove causality. Many other factors can influence the development of heart disease, including physical exercise, family history and a person’s lifestyle habits. “For example, younger women who are more physically active and get more exercise tend to follow healthier, plant-based diets that may include more isoflavone-rich foods like tofu. Although we have controlled for these factors, caution is recommended when interpreting these results,” said Sun.

In 2000, the U.S. Food and Drug Administration approved health claims that soy edibles protect against cardiovascular disease. However, since then, clinical trials and epidemiological studies have been inconclusive, and the agency is reconsidering its now twenty-year-old decision. The American Heart Association’s 2006 Diet and Lifestyle Recommendations and a 2006 science advisory on soy protein, isoflavones and cardiovascular health

Hay fever or coronavirus: How to tell the difference between hay fever cough and COVID-19