The 10,000-step challenge that helped me walk back to health: Money guru Martin Lewis on his daily fitness target

For most of us, the word ‘meeting’ means sitting round a table, perhaps with biscuits and a mug of coffee, as we discuss the business of the day with colleagues.

Not so for Martin Lewis, the personal finance pundit and founder of moneysavingexpert.com.

Lewis, to whom the nation’s consumers turn for advice on money matters from insurance and shopping to loans and phones, used to spend his days like many of us: hunched over a computer at his desk, sitting in meetings, or in a car or taxi travelling between work engagements.

Not any more. Now, he seldom does face-to-face meetings — and he barely sits down.

Most work conversations take place while he is on the move, even when he’s with family and friends.

Everyone who wants to talk to him must do so while Martin is walking.

His PA schedules all his phone calls and interviews for when he is walking across London, as he does every day, travelling from home to work to TV studios — he is a regular on ITV’s Good Morning Britain — or to Parliament, where ministers also seek his advice on financial matters.

And if he has nowhere to get to, he will pace around the room as he talks on the phone, or while he is thinking. Every step he takes is logged by the fitness tracker on his wrist — he takes it off only to recharge it or to have a bath.

When he hits 10,000 steps, the tracker buzzes. But nowadays this is the bare minimum — most days he manages more than double that.

For the past three years he has not let a day go by without trying to achieve his 10,000 steps. Not even when he got food poisoning.

Recently, he had to have a minor operation. It was scheduled for midday, so he did his steps first.

If he flies long-haul, he does his steps before and after.

The last time he missed his 10,000 quota was when he tore a hamstring, forcing him to take three days off. By day four he was back on his feet.

It is, he admits, ‘an obsession, but a healthy obsession. It has done me a lot of good’.

It started in 2015 when his wife Lara, a technology journalist, gave him a fitness tracker as a present. He started wearing it, confident he must already be achieving 10,000 steps a day. 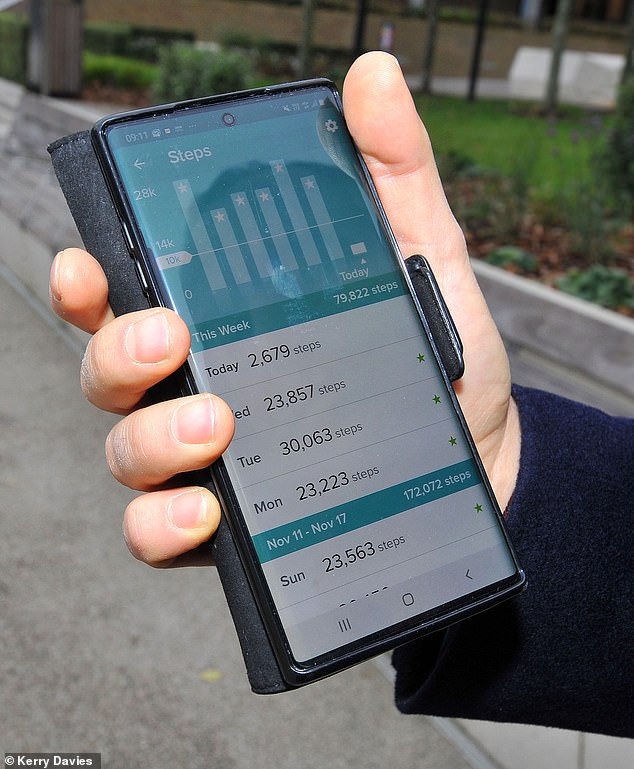 The stats don’t lie: Martin has religiously recorded his steps every day since 2015

Critics say there is no scientific basis for the 10,000-step goal. But, says Lewis: ‘It is not nonsense. It’s a nice round number and I’m driven by numbers.’

So he began restructuring his life around walking, applying the same zeal and dedication that he brings to money management.

Instead of making a 30-minute bus or taxi journey across London to and from work, he walked. ‘Proper walking, not strolling: arms swinging, legs striding,’ he says. ‘It took me 50 minutes, so it only cost me 20 minutes [in time saved by commuting by bus or cab].’

It took a toll: he developed plantar fasciitis, a painful condition affecting the soles of the feet, so he swapped his city shoes for trainers and now has three pairs that he rotates, on a podiatrist’s advice.

He knows that, as his own boss, he is lucky that he can organise his day to incorporate more walking and insist on phone meetings. By the end of a 30-minute phone call he will have done 3,600 steps.

But even those stuck in a workplace all day can often change their normal commute to a walk. ‘A 30-minute walk twice a day, plus a bit of pottering, and you’ll hit 10,000 steps,’ he says.

In 2017 his obsession became an addiction as he pushed himself to a daily average of 25,420 steps. This, he admits, was too much. He became reluctant to do anything for fun if it would interfere with getting his steps in.

Magic goal or just a guide?

Although experts agree 10,000 steps is a good health target, it is an arbitrary figure, invented in the 1960s as part of a marketing campaign.

Since then, the goal of 10,000 steps a day has been endorsed by the World Health Organisation.

In fact, anything over 6,000 steps a day is likely to have a protective effect against health issues including heart disease, cancer and stroke.

‘There is no better remedy than walking for a host of problems, from loneliness to obesity,’ says Dr Nick Baylis, a consultant well-being psychologist.

‘It can also help improve your memory and brain function.’

But can walking 10,000 steps a day really help to rid someone of repetitive strain injury (RSI) in their hands?

Perhaps not directly, but the NHS advises: ‘Some people find including exercise in their daily routine, such as walking or swimming, eases their symptoms.’

In other words, anything that keeps your bones and muscles healthy in one part of the body may benefit other areas.

So he has scaled things back, making sure he fits his steps in around family life. Even so, his wife will occasionally give him ‘the Look’, he says, if they are planning an outing and he starts fretting about his steps.

Mainly, however, she is tolerant. She has her own tracker, ‘although she is not as obsessed as me. But being married to someone who does a lot of steps, you do a lot too — if we go out in the evening, we always walk’.

Even their seven-year-old daughter has a child’s tracker. ‘We are very careful to set the target low, as we don’t want her to obsess about it,’ Lewis says.

His tracker automatically plots each day’s steps onto a graph, and he plots his runs onto one himself so he can work out his daily, weekly and annual totals and averages.

‘I graph everything,’ he laughs. ‘I have graphed every Scrabble game my wife and I have played since we met. It’s my nerdy psyche.’

But the health benefits are the main reward. ‘It has been so beneficial, physically and mentally,’ he says.

Before he started wearing the tracker, he suffered from debilitating repetitive strain injury in his hands. Now it has almost gone, which his physiotherapist attributes to his walking.

Martin is fitter, stronger — particularly in his core — and slimmer by half a stone, burning 3,000-4,000 calories a day.

‘People who walk tend to be healthier,’ he says. ‘It’s no coincidence health insurance companies link your premium to how many steps you do.’

And he is much less stressed.

‘Like any busy working parent, life is crammed. I adore spending time with my daughter but I need time on my own, too, and doing the steps gives me that. My great treat, once a phone call has finished, is to have 15 minutes walking with an audiobook. It’s my ‘me time’.’

As well as the walking, he does weights and runs enough miles to add up to a marathon a week.

Taking up walking was ‘never about saving money’, he says, but it does save him thousands a year.

He got rid of his car and only takes a motorbike taxi if he is tight for time.

What if it’s raining heavily or brutally cold?

‘That’s not a reason not to walk. During the ‘Beast from the East’ [snow and ice] in 2018 I walked to work with thermals on.’

He is linked to lots of his friends via his tracker. ‘Most friends don’t bother trying to compete for weekly steps, but a couple do,’ he says. ‘The main one is my sister’s friend Meital. She’s a 130,000 to 150,000-a-week stepper.

‘I remember calling my sister one Sunday evening — the last night of the stepping week. I was walking around the room to get a few more steps in. She laughed and said: ‘Funny you’ve called. Meital is here, walking round the sofa to catch you up.’

‘In case you wonder, I still won.’