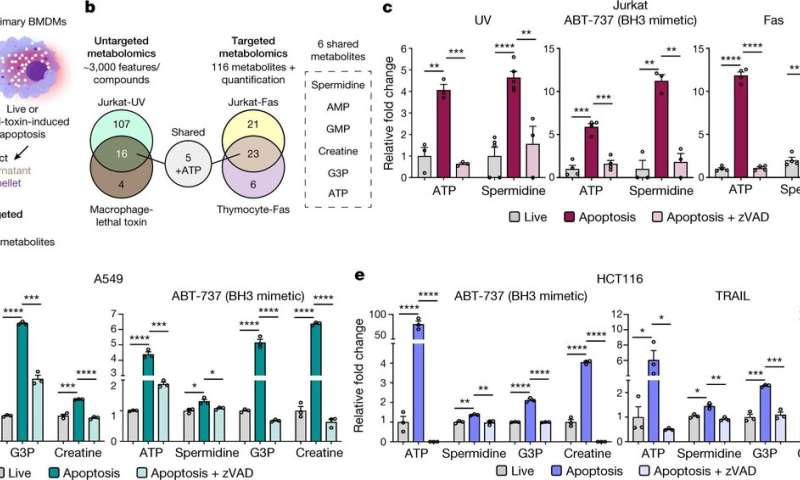 A team of researchers at the University of Virginia has found that metabolites released during apoptosis induce macrophages to express genes involved in tissue repair—and they also inhibit inflammation. In their paper published in the journal Nature, the group describes their study of the process of apoptosis and what they learned about it. Douglas Green with St. Jude Children’s Research Hospital has published a News & Views piece describing the work by the team in Charlottesville in the same journal issue.

Apoptosis is the process by which cells in the living body die naturally. Prior research has shown that it is an orderly process carried out by enzymes called caspases. They do their work by cutting up proteins inside the cell. DNA in the cell is also cut up, and actin proteins are remodeled in ways that allow them to break down. And finally, lipids on the surface of the cell send signals to the immune system letting it know when the cell is ready to be “digested.” What has remained unclear is how the dying cells actually communicate with macrophages.

The work by the team involved taking a closer look at the process of apoptosis from a communications perspective. In so doing, they found that small molecules are released from a cell during apoptosis that are then picked up by macrophages. The macrophages then start expressing genes associated with tissue repair. Notably, the molecules were also found to inhibit inflammation—a finding that could lead to the development of anti-inflammatory therapies. The researchers suspected that metabolites were involved in this process. That led them to focus on the many metabolites that are released from cells undergoing apoptosis, as opposed to those that remain in the cell as it dies. They found that the difference in specificity was due to pannexin 1, a protein channel found on the surface of cells, which they found opens during apoptosis. The researchers report that cells they engineered without pannexin 1 failed to release metabolites associated with apoptosis.

Different kinds of white fat are important in disease