Moderna’s Covid vaccine should be made available for children aged six to 17 years, an independent panel at the Food and Drug Administration said Tuesday — as America’s Covid wave fell on all fronts.

All 22 members of the Vaccines and Related Biological Products Advisory Committee (VRBPAC) voted to approve the two-dose jab for the age group following an all-day debate on the issue.

The FDA is now expected to sign-off on the shots in the coming weeks. The Centers for Disease Control and Prevention (CDC) will also need to give them the green-light before they can be rolled out nationwide.

Dr Paul Offit, a pediatrician who sits on the committee, said the benefits of the jab ‘outweigh’ the risks among youngsters — but added that it was now a ‘different time’ in the Covid pandemic.

Children less than 11 years old will be offered two half-strength doses of the shots, while those above this age will get jabs that are the same strength as those administered to adults.

Many experts have raised concerns over rolling out Covid vaccines to children because of the vanishingly small risk they face from the virus, with under-18s making up about 0.1 percent of America’s more than a million Covid fatalities.

Pfizer’s Covid jab was made available for children over five years old months ago, but uptake has been sluggish with less than a third of children aged five to 11 having come forward to get fully-vaccinated.

It comes after the CDC released an analysis today suggesting the Moderna jab was more likely to trigger heart inflammation in young and middle-aged men than its Pfizer competitor.

All three main measures of America’s Covid wave are also now pointing downwards in a sign it is continuing to plateau. But amid the drop two other subvariants of Omicron — BA.4 and BA.5 — are rising in the country. 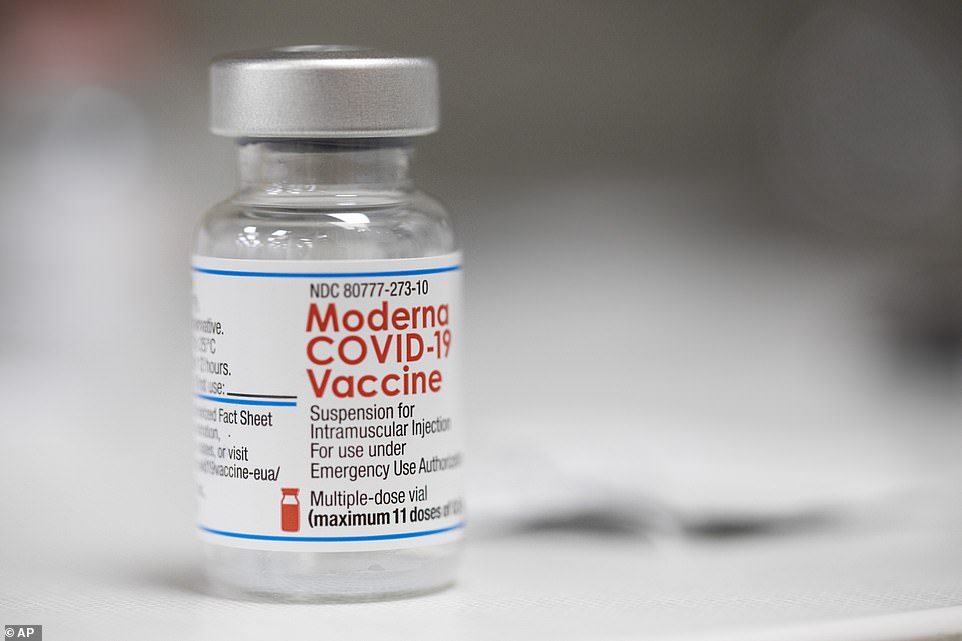 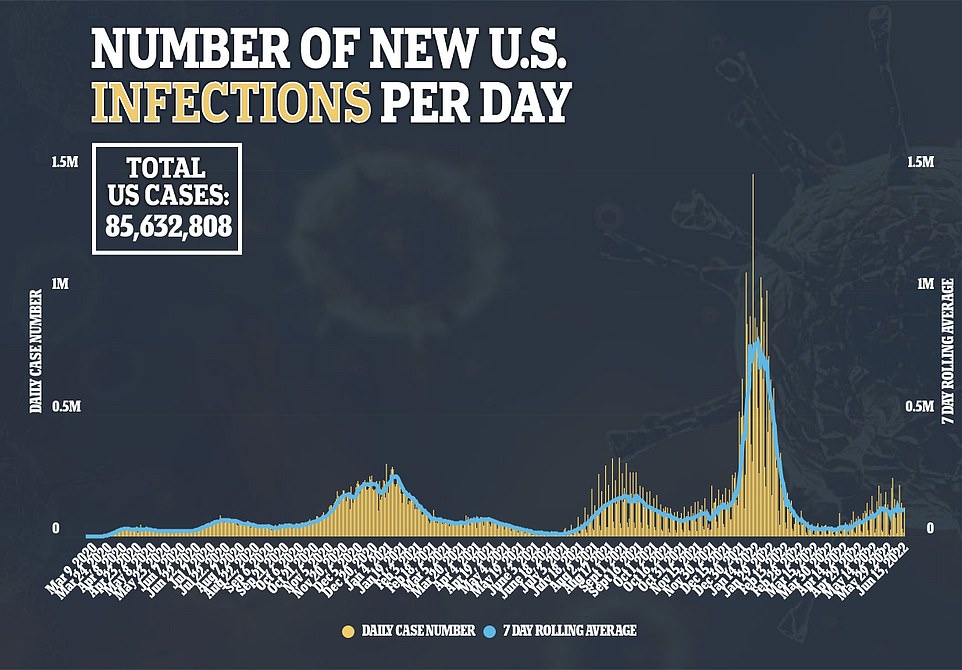 US Covid wave is now falling on all fronts. Infections dropped by about a tenth yesterday compared to the same time last week, with the seven-day average for cases now standing at 107,000 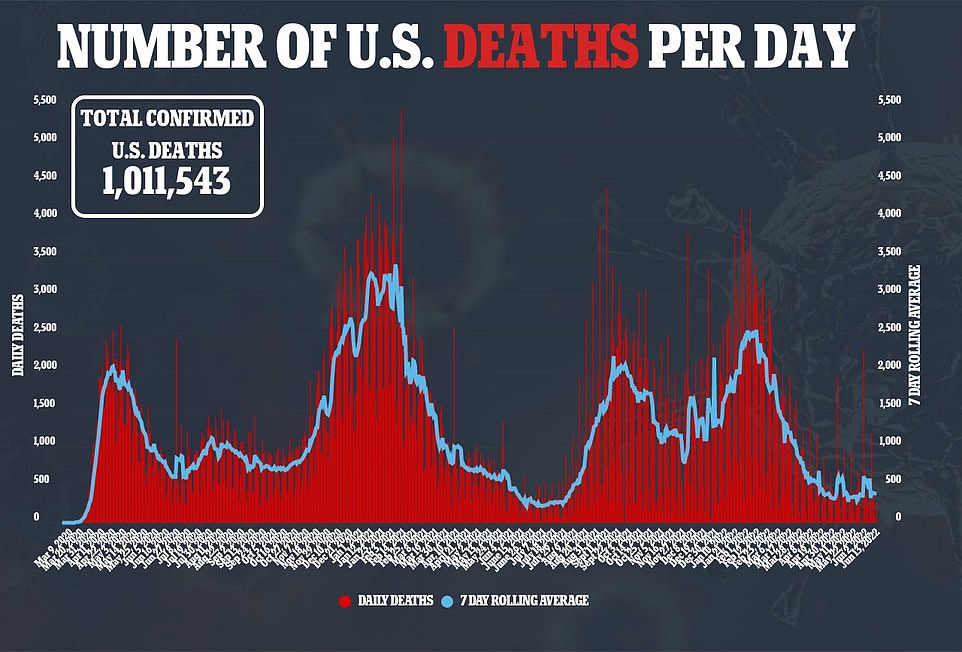 The number of fatalities reported in the US also dropped by about a third in a week to 386 a day, they reported. And the number of daily Covid admissions ticked down by 3.6 percent 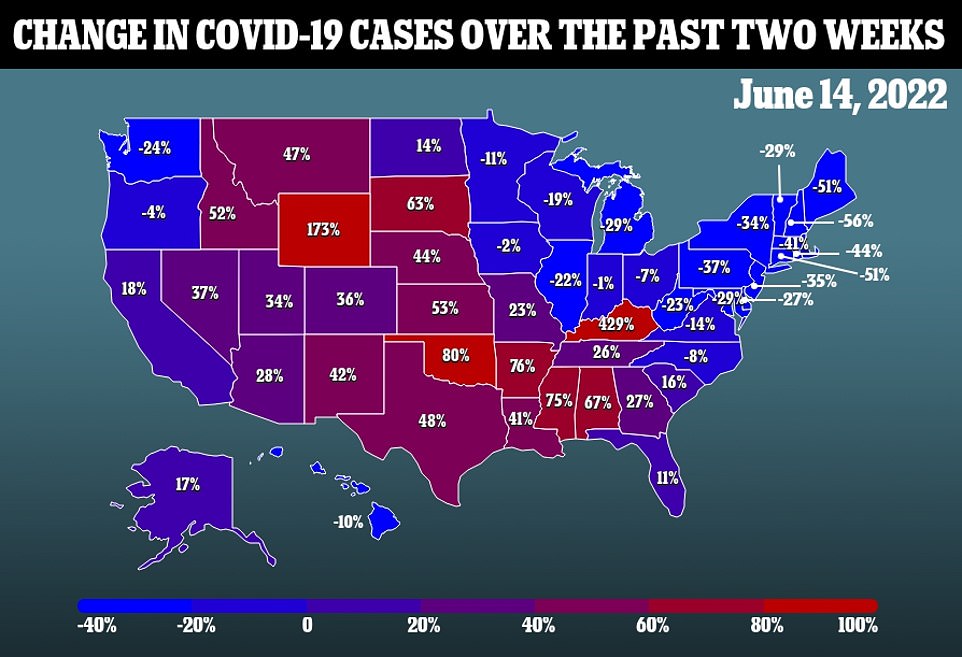 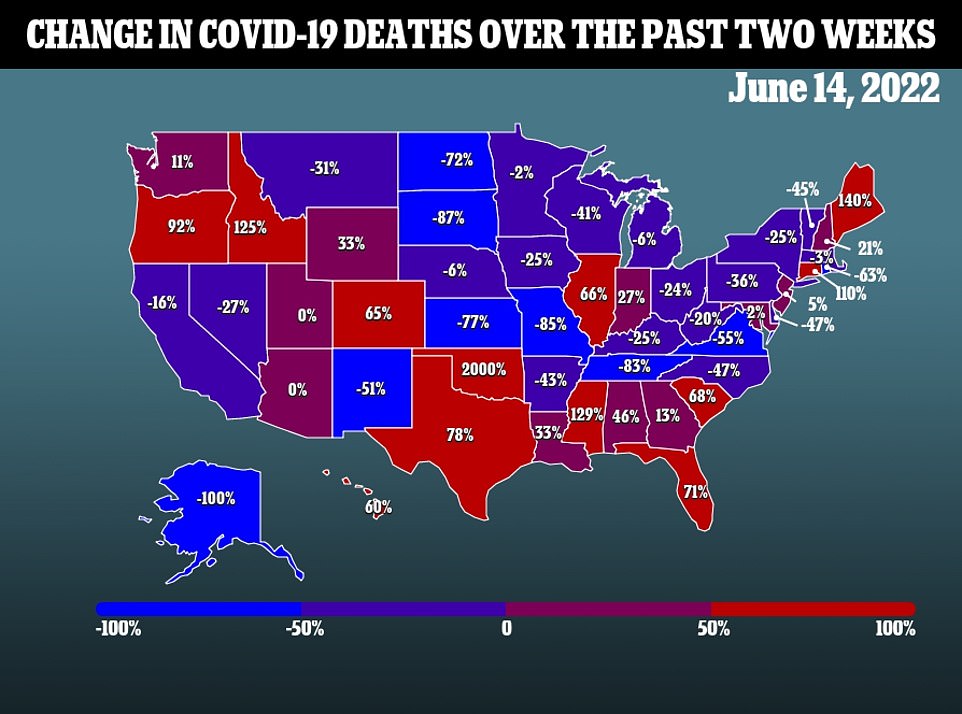 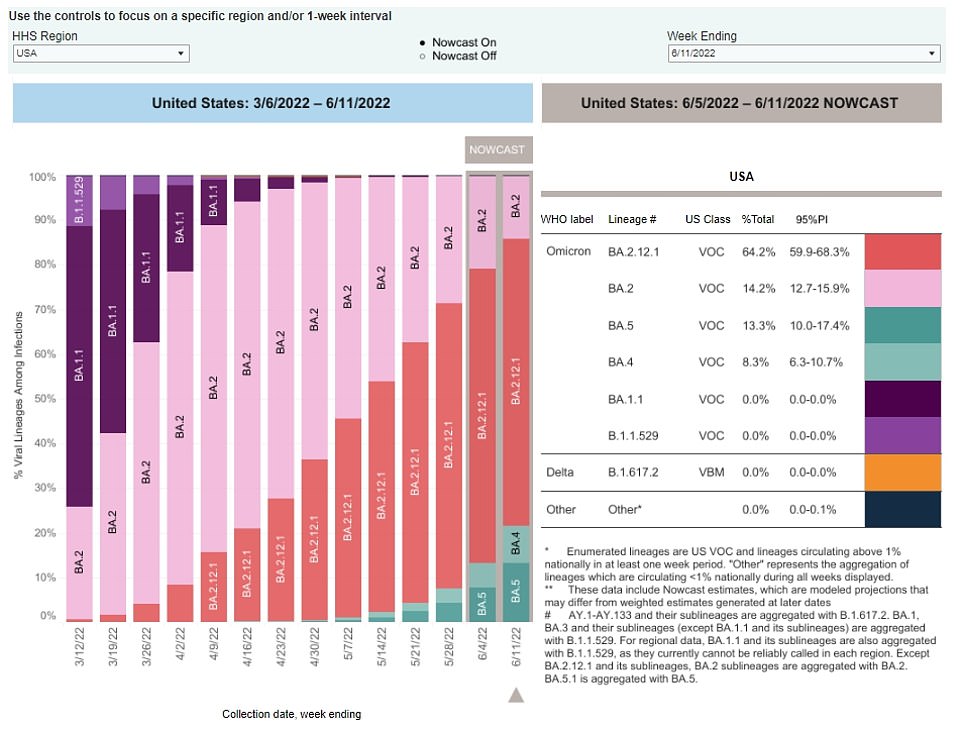 The above shows the propotion of Covid cases that were down to subvariants BA.4 and BA.5 over the recent weeks. It reveals that these are now behind a larger proportion of infections, and gaining ground in the US

More versions of Omicron are on the rise in the US, just as cases from the latest wave appear to be plateauing.

In its latest update the CDC said BA.4 and BA.5 were now behind up to one in three infections across the country, up from one in five a week ago.

They are replacing the strain BA.2.12.1 which was behind the most recent wave in the US.

Both subvariants are more transmissible than the original strain of the virus.

They are also better at getting around immunity triggered by vaccines and previous infections.

There is no evidence, however, that either is more likely to cause severe disease or death.

The strains are most common in region six — which includes Arizona and Texas — where they are behind around one in three infections.

In a separate release today the CDC said among men aged 18 to 39 who received two doses of Moderna’s Covid shot, about 97.3 cases per million shots given out had myocarditis or pericarditis recorded.

For comparison, with the Pfizer shot these cases were recorded at a rate of 81.7.

About eight in ten men in this age group are already double-vaccinated against Covid, with the CDC saying among the very few who faced the reaction most recovered without any serious effects.

It was not clear how much higher this rate was than the number that would be expected in a typical year, but the roll out was complicated last year amid reports the conditions were more common among young boys.

Today’s figures on the heart inflammation rates by jabs were issued by the CDC, Reuters reports.

The agency said its findings came from data submitted to the Vaccine Safety Datalink system, where any potential side-effects from jabs are reported.

But it added there were also inconsistencies in the data that had been submitted from all the different areas reporting to the system.

Symptoms of the conditions include chest pain, fatigue, an irregular heartbeat and shortness of breath.

Normally, however, both conditions go away without leading to any permanent complications. But in severe cases they can lead to damage to the heart muscle.

Scientists are still unsure why the vaccines — which use the same mRNA technology — trigger the condition, although it may be linked to an immune response to a vaccine.

The CDC also said in February that the Moderna shot was slightly more likely to trigger heart inflammation than Pfizer’s, which is based on the same technology.

They said there was no difference in symptoms experienced by recipients of either shot, and that most patients were only in hospital for a single day. None were admitted to intensive care.

Dr Sara Oliver, a CDC official, said at the time that although more cases of the condition were expected after Moderna’s shot the benefits still ‘far outweigh’ the potential risks.

Previous research from the U.S. and Israel suggested that myocarditis was more common among young boys.

But this was not substantiated by the world’s biggest study on the issue carried out in Britain, which found there was no increased risk of heart inflammation from the jab among adults and older teenagers.

Scientists suggested this may be because the UK leaves about a 12-week dosing gap between people, whereas in the U.S. this gap is around three weeks.

The FDA’s independent committee is set to meet today to evaluate and vote on whether to approve Moderna’s vaccine for six to 11-year-olds at half the size of doses given to adults, and at full size for 12 to 17-year-olds. 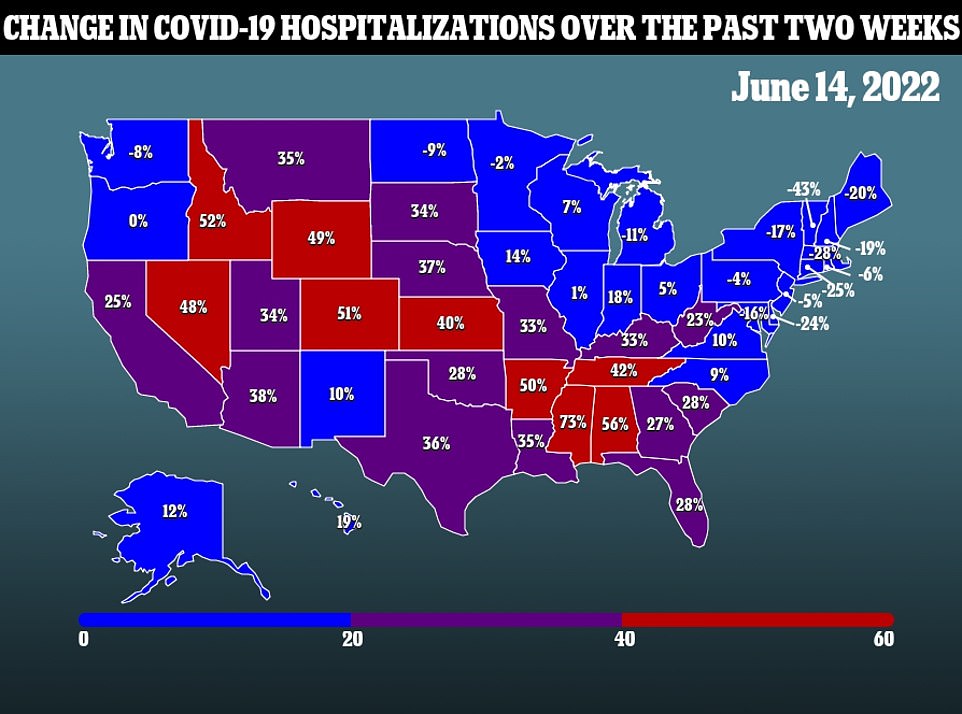 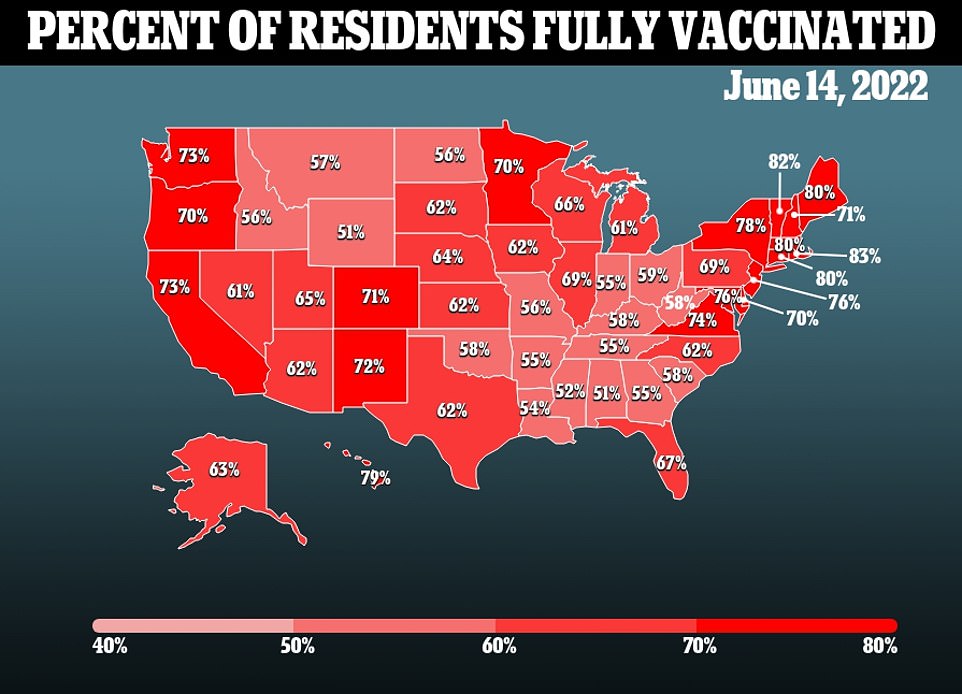 Moderna had delayed its application for this after some studies indicated its jab triggered a higher rate of myocarditis. But it later applied after the FDA found that side-effects in this group were minimal.

Pfizer’s Covid vaccine has been available for the age group for weeks, but uptake is slow with about a third of the 28million children eligible having already been jabbed. Experts say the Moderna jab could be used as a ‘safety net’ in case there are any concerns over Pfizer’s or problems with its manufacturing.

The FDA held up Moderna´s teen vaccine for months while it investigated a rare side effect, heart inflammation. That´s mostly a risk for teen boys and young men, and also can occur with the Pfizer vaccine. Moderna got extra scrutiny because its shots are a far higher dose.

In their review, FDA scientists said there were no confirmed cases of the heart inflammation in Moderna’s child studies. But experts say the studies may have had too few participants for a rare side effect like that to appear.

‘It´s just not enough people in the clinical trials to detect’ the problem if it’s occurring, said Dr. Jesse Goodman of Georgetown University, a former FDA vaccine chief, in a call with reporters earlier this week.

The FDA analysis concluded that two doses of Moderna are effective in preventing symptomatic COVID-19 illness in teens and younger kids, with the levels of virus-fighting antibodies comparable to those developed in young adults.

Vaccine effectiveness was estimated at 93 percent for the 12-17 group, and 77 percent for the younger group. However, the research was done when earlier versions of the coronavirus were causing most U.S. infections, and it’s not clear how well they work against more recent variants.

The FDA review said it was likely a booster shot would be needed, as is now recommended for children vaccinated with Pfizer’s shots, as well as for all adults.

How much demand there will be for Moderna’s shots isn’t clear. Teens became eligible a year ago for Pfizer’s vaccine, which uses the same technology, and only 60 percent have gotten two doses. Shots for younger kids started in November; about 29 percent have been vaccinated, according to the Centers for Disease Control and Prevention.

If the FDA authorizes Moderna shots for teens and schoolchildren, the matter moves next to the CDC, which makes recommendations about vaccinations to doctors and the public. A CDC spokesperson said the agency is not expected to take up the question until later this month.

The Best Knee Braces, According to Physical Therapists