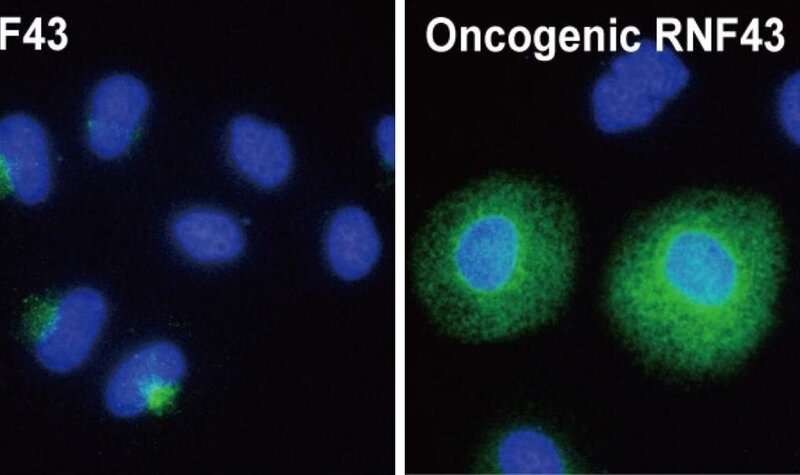 A team of scientists has unraveled the molecular mechanism behind one of the causes of colorectal cancer, and a treatment target.

The Wnt signaling pathway is a cell signaling pathway that promotes cell proliferation and is essential for the development and optimal function of cells and tissues in many organisms. Many molecules are involved in the regulation of this pathway; a mutation in the molecules could lead to cancer. RNF43 is such a molecule, a protein that is found in the cell membrane of intestinal stem cells (ISCs). It functions as a negative regulator of the Wnt signaling pathway, and mutations of RNF43 are commonly found in colorectal cancer. However, the mechanisms by which RNF43 mutations cause cancer were not fully elucidated.

In an extensive series of experiments, a team of scientists, including Tadasuke Tsukiyama from the Faculty of Medicine at Hokkaido University, has described a molecular mechanism by which mutations at one site in RNF43 cause cancer—and have also described a potential method to treat these cancers. Their findings were published in the journal Nature Communications.

They first identified the exact region of RNF43 in which mutations lead to activate Wnt signaling. From experiments with induced mutations, they found that some serine residues in RNF43 must be modified with phosphate (phosphorylated) in order to become functional. Mutations which block phosphorylation in RNF43 lead to cancer. They designed RNF43 mutants which had properties similar to phosphorylated RNF43. These mutants retained their function, confirming their hypothesis.

In a normal cell, RNF43 negatively regulates Wnt signaling pathway by initiating the degradation of the receptor for Wnt. When RNF43 mutates into oncogenic RNF43, it can no longer downregulate Wnt signaling. Furthermore, the group found that the oncogenic RNF43 cooperates with active Ras, another oncogene, to induce tumors. This was verified in mice models as well as in cellular experiments. From this information, the scientists analyzed data from colorectal cancer collected from The Cancer Genome Atlas (TCGA) and identified that mutant RNF43 works with Ras to induce tumorigenesis in humans, as well. Interestingly, other experiments by the group suggested that further expression of oncogenic RNF43 was induced by positive feedback of the Wnt signaling pathway, which accelerates RNF43’s suppressive role on anti-cancer gene p53.

A separate question the scientists addressed was the role of normal and mutant RNF43 in other species. In experiments conducted on zebrafish embryos and mouse intestinal organoid models, they demonstrated that phosphoregulation of RNF43 plays a key role in the morphogenesis and the maintenance of ISCs, confirming the conserved role of this regulation. 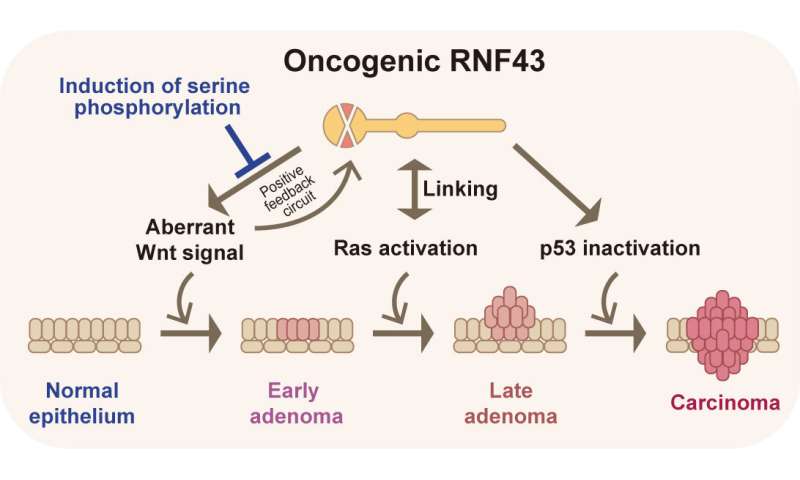 The scientists concluded that modification of RNF43 phospho-status to maintain its function may be a potential treatment for some types of colorectal cancer. What remains to be understood is the exact role different RNF43 mutations play in cancer. To do this at a useful scale, it is important to collect more detailed molecular data from patients recorded in TCGA.

Former professional football to coughs police: I have Covid!

Even When IVF Is Covered by Insurance, High Bills and Hassles Abound