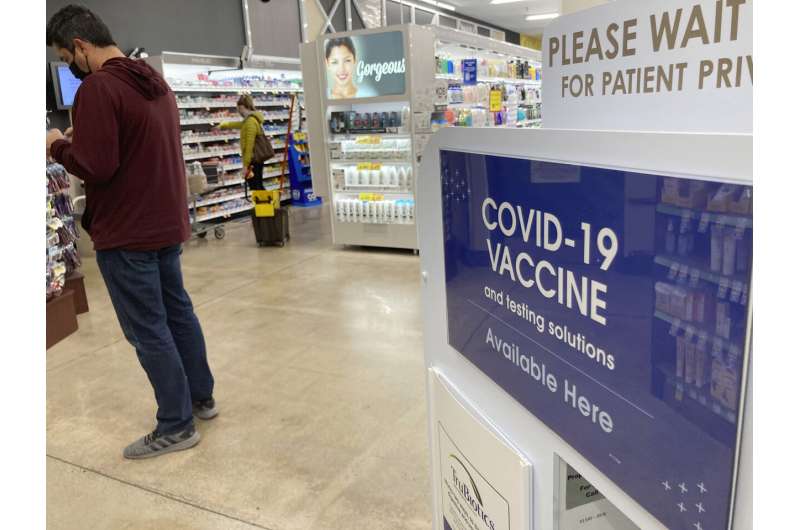 The United States is steadily chipping away at vaccine hesitancy and driving down COVID-19 cases and hospitalizations to the point that schools, governments and corporations are lifting mask restrictions yet again.

Nearly 200 million Americans are fully vaccinated and the nation’s over-65 population, which bore the brunt of the pandemic when it started nearly two years ago, is enthusiastically embracing vaccines.

Nearly 98% of the over-65 population has received at least one COVID-19 shot and more than 25% of them have gotten boosters, just weeks after they were authorized. The improving metrics could get a boost from President Joe Biden’s workplace mandate unveiled Thursday and the launch of COVID-19 shots in elementary-age students.

“The more children and adults are vaccinated, the quicker we will be able to resume a new normal. I want that for my kids. I want that for our planet,” said Lipsker, of Spokane, Washington. “I think I will feel much safer around our family. I have a 98-year-old grandmother that my kids adore. I will feel safer having my kids around her, and my parents.” 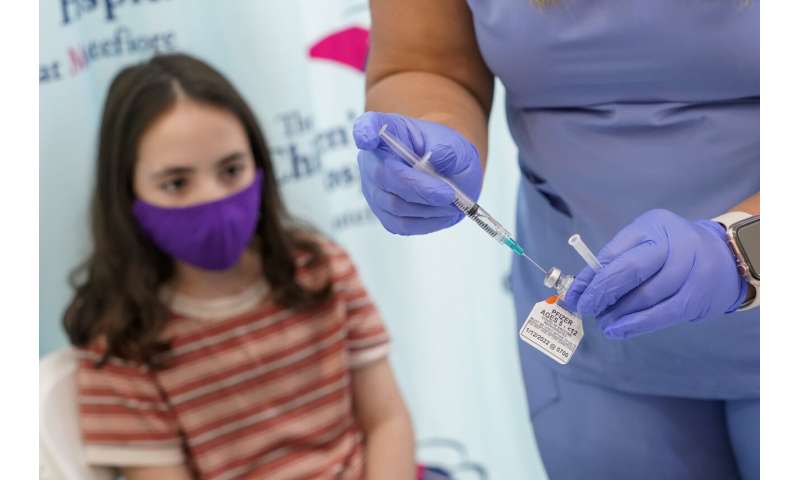 But the pandemic has proven hard to control. In the U.S., winter is coming and diseases like COVID-19 often spread easier with people indoors and closer together. The worst surge in the nation happened last winter, before the vaccines were widely available.

While cases around the world are declining, the World Health Organization said this week new cases jumped by 6% in Europe, compared with an 18% increase the previous week. The U.S. plans to open its borders to international travelers Monday.

The trends in the U.S. have health officials feeling better for the first time in months and hoping the progress will continue as long as a new variant doesn’t pop up or the rate of newly vaccinated people declines. But they have also been down this road before and have come to the conclusion that COVID-19 is going to be an issue for years to come.

“It is going to be endemic. It is going to exist in our population for a long period of time,” said Deborah Fuller, a professor of microbiology at the University of Washington. “You saw what looked like an inflection point coming and, boom, here came the delta variant.” 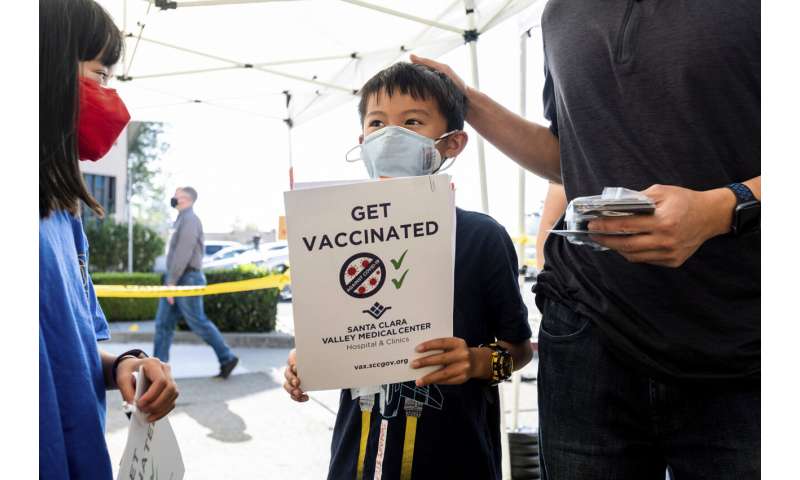 There are still plenty of encouraging signs in the U.S. Pfizer announced Friday its experimental pill for COVID-19 cut rates of hospitalization and death by nearly 90% among patients with mild-to-moderate infections and it will soon ask the U.S. Food and Drug Administration to authorize its pill.

The number of Americans in the hospital with COVID-19 is averaging around 42,000, the lowest number since the beginning of August, according to the Centers for Disease Control and Prevention. The hospitalization dip matches a dip in overall cases.

But deaths, which lag behind increasing case counts because it can take weeks for the disease to kill, continue to mount. The U.S. is averaging 1,100 coronavirus deaths per day, down from more than 1,600 two weeks ago.

More than 750,000 people have died from COVID-19 in the U.S. in less than two years, about the population of Denver. The latest 50,000 deaths happened in the past month. 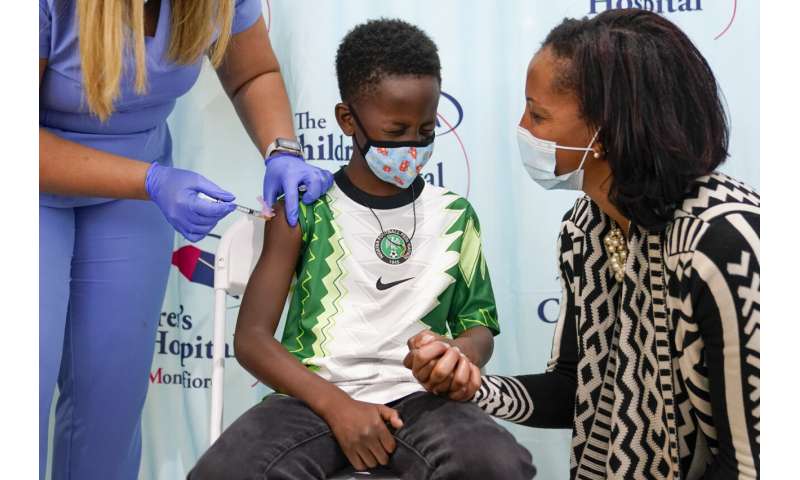 With hospital beds emptying, case counts declining and an increase in vaccinated people, however, it has been a slow return to a new normal. Louisiana’s Democratic Gov. John Bel Edwards last week ended a face covering requirement almost everywhere but schools, saying he was “optimistic, relieved that the worst of the fourth surge is very clearly behind us now.”

Memphis also ended its mask requirement, and so did a number of schools around Atlanta as the spread of the virus decreased. Amazon ended a mask mandate for most vaccinated workers in places where local or state rules don’t require them. Hawaii’s governor ended pandemic capacity limits on businesses like restaurants, bars and gyms, but owners must continue to enforce social distancing rules.

Color-coded virus maps that were a sea of red in September have started to turn yellow and blue in recent weeks, indicating a much slower spread of disease. The CDC says about 350 counties are now experiencing moderate or low transmission, many of them in the Deep South.

In the U.S., nearly 60% of the population—more than 193 million people—are fully vaccinated. More than 21 million have received a booster dose, and those numbers are soaring each day. The average number of Americans getting booster shots has reached nearly 800,000 per day. That compares with about 265,000 people per day getting their first shot. 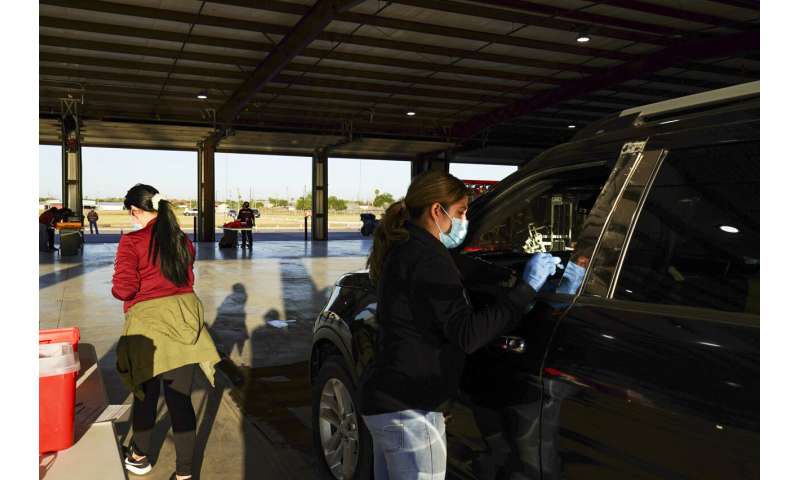 It’s still too early to know how many children under 12 have gotten shots in the three days they have been available.

Lagging behind are Southern and more rural states and that rural divide even extends to states with higher vaccination rates like Maine, where more than 70% of the population is vaccinated. Many of the rural states are starting to experience cold weather that is driving people indoors and creating ripe conditions for more virus spread.

In Maine, the five counties with the lowest vaccination rates are rural ones along the border with Canada, where rates hover just over 60%.