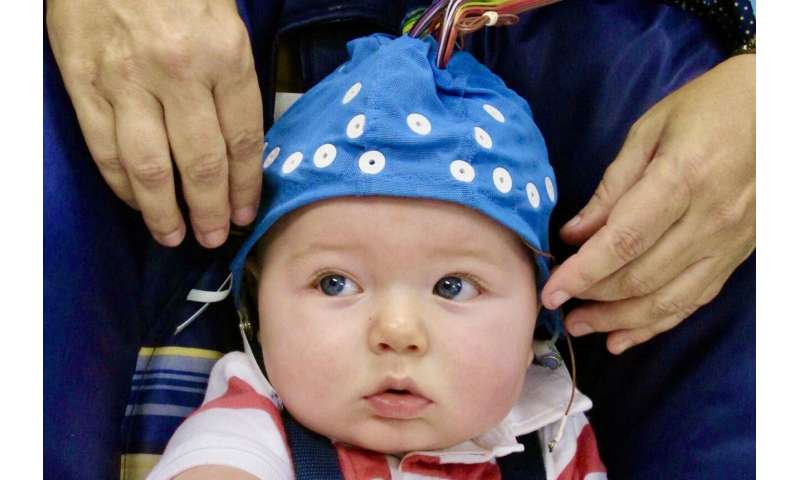 As the world prioritizes social distancing to stop or slow down the spread of coronavirus (COVID-19), a new study by researchers at Florida Atlantic University demonstrates that mother-infant touch and contact are essential for optimal neurodevelopmental regulation in early infancy. Kangaroo Care, a skin-to-skin, chest-to-chest method of caring for a baby, especially one who is premature, has been associated with promoting neurophysiological development. This method of caring emphasizes the importance of holding the naked or partially dressed baby against the bare skin of a parent, typically the mother. New research is showing that extended use of Kangaroo Care can positively benefit full-term infants and their mothers during the post-partum period.

In addition to EEG patterns in infants, the researchers looked at basal oxytocin—the “cuddle” hormone—and cortisol reactivity—the “stress” hormone—in infants and their mothers. Oxytocin is considered an affiliative hormone associated with caregiving and affectionate behavior whereas cortisol reactivity is implicated in the stress response system. Researchers compared six weeks of Kangaroo Care to standard caring (control group) during the first three months of life.

For the study, mothers assigned to the Kangaroo Care group were given a Kangaroo Care wrap (Nurtured by Design, The Kangaroo Zak) and were taught proper procedures by a certified trainer at the prenatal visit. Mothers were asked to use Kangaroo Care, skin-to-skin, chest-to-chest contact with her infant, for one hour a day for six weeks and were provided with journals to record the frequency of Kangaroo Care use. Mothers in the control group were given infant feeding pillows and journals and were asked to record infant feedings for six weeks. Babies were fitted with a stretch Lycra cap to measure EEG activity during a five-minute quiet-alert state at three-months. Oxytocin was measured by collecting maternal and infant urine, and infant cortisol reactivity was measured by collecting infant saliva samples before and after a mild stressor.

Results of the study, published in the journal Infant Behavior and Development, provide evidence that the physiology of mothers and their full-term infants is influenced by obtaining Kangaroo Care training and utilizing it during the post-partum period.

“We wanted to know if exposure to extended tactile stimulation using the Kangaroo Care method would increase peripheral basal oxytocin and suppress cortisol reactivity in the babies in our study,” said Nancy Aaron Jones, Ph.D., senior author, an associate professor, and director of the FAU WAVES Emotion Laboratory in the Department of Psychology in FAU’s Charles E. Schmidt College of Science, and a member of the FAU Brain Institute (I-BRAIN). “We also wanted to examine if Kangaroo Care increases oxytocin levels in mothers, which has important implications for post-partum depression.”

Findings showed that the infants’ left frontal area of the brain (implicated in higher-order cognitive and emotional regulatory skills) appears to be stimulated from the Kangaroo Care method. In addition, mother/infant dyads showed increased oxytocin along with decreases in stress reactivity, suggesting regulatory abilities are prompted by experiences with positive caregiving in infancy.

Results from the study indicate that Kangaroo Care training and level of use by caregivers during infancy can favorably influence both neurodevelopmental trajectories and infant neurobiological functioning.

$500 for a toothbrush? Dentists give their verdict