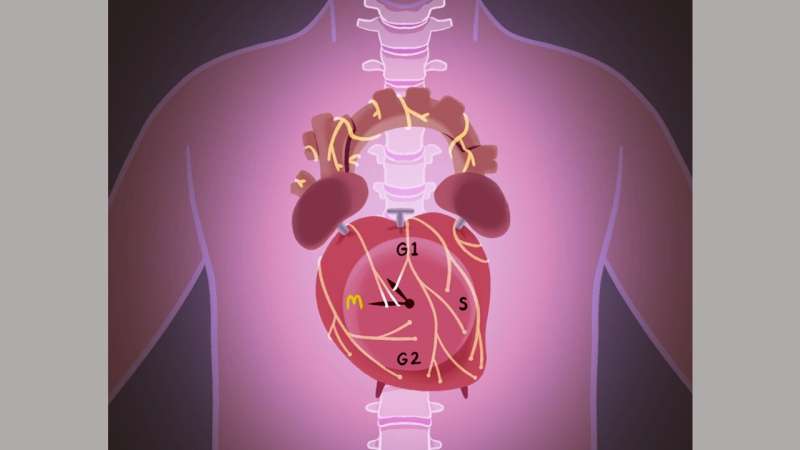 Human heart muscle cells cease to multiply after birth, making any heart injury later in life a permanent one, reducing function and leading to heart failure. Now, however, Johns Hopkins Medicine researchers say they have new evidence from mouse experiments that manipulating certain nerve cells or the genes that control them might trigger the formation of new heart muscle cells and restore heart function after heart attacks and other cardiac disorders.

More specifically, they say, results of their study, published Dec. 1, in Science Advances, sheds new light on how some neurons regulate the number of heart muscle cells.

Nerve cells have long been known to regulate heart function, but their role and impact during heart development and their effect on muscle cell growth has been unclear.

“Our study sought to examine the role of so-called sympathetic neurons on heart development after birth, and what we found is that by manipulating them, there could be tremendous potential for regulating the total number of muscle cells in the heart even after birth,” says Emmanouil Tampakakis, M.D., assistant professor of medicine at the Johns Hopkins University School of Medicine, and the lead author of the study.

The nerve cells that make up the sympathetic nervous system (SNS) control automatic processes in the body such as digestion, heart rate and respiration. The SNS is typically associated with “fight-or-flight” responses, the body’s general response to alarming, stressful or threatening situations.

For the new study, the research team created a genetically modified mouse model by blocking sympathetic heart neurons in developing mouse embryos, and analyzed the drivers of heart muscle cell proliferation through the first two weeks of life after birth.

What they found was a significant decrease in the activity of a pair of genes—the period 1 and period 2 genes—already known to control the circadian cycle. Remarkably, removing those two circadian genes in mouse embryos, the researchers saw increased neonatal heart size and an increase in the number of cardiomyocytes, or heart muscle cells, by up to 10%. This suggested that the effect of sympathetic nerves on heart muscle cells is likely mediated through these two circadian or “clock” genes.

Clock genes are components of the circadian rhythm pattern that in mammals regulates bodily functions on a more-or-less 24-hour cycle aligned with hours of daylight and darkness.

“Shortly after birth, mammals, including people and mice, stop producing heart muscle cells. And unlike other organs, like the liver, the heart can’t regenerate after it’s damaged,” says Tampakakis. “We’ve shown that it may be possible to manipulate nerves and/or circadian genes, either through drugs or gene therapies, to increase the number of heart cells after birth.”

People who survive a heart attack can lose up to a billion heart muscle cells, and Tampakakis says there is scientific evidence that hearts tend to recover faster after an attack when the total number of cells to begin with is higher. By manipulating sympathetic nerves and clock genes—a technique called neuromodulation—researchers believe the heart could be made to respond to injury much better.

“Neuromodulation is a pretty new concept in cardiology, and we believe these are the first reports that associate clock genes with new growth of heart muscle cells.” says Chulan Kwon, Ph.D., M.S., associate professor of medicine and director of the Cardiovascular Stem Cell Program at the Johns Hopkins University School of Medicine. “Our study, maybe for the first time, shows what’s happening if you block the supply of nerves to the heart, and provides new insights for developing neuromodulation strategies for cardiac regeneration.”

Tampakakis says his team is working on further experiments to characterize the different groups of neurons that supply the heart and demonstrate how those nerves develop and adjust over time and after heart injury.

What can we learn from epidemics past?

Report: HHS fends off cyberattack as it fights coronavirus