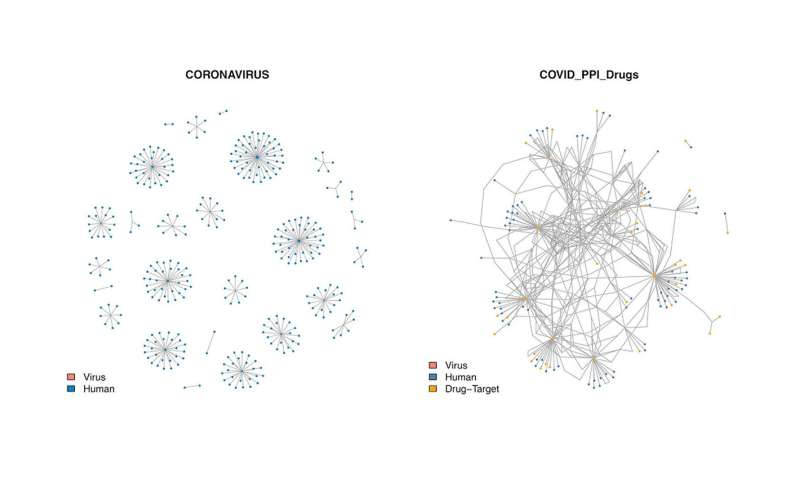 The findings, reported via Northeastern’s Center for Complex Network Science Research on Wednesday, come from a modeling tool for infection dynamics based on network science—complex math, physics, and computing.

The toolset mapped the way proteins within human cells behave after a cell is hijacked with SARS-CoV-2, the new coronavirus that causes the COVID-19 illness.

“We have prioritized many more drugs, but there are 40 that we are actually trying to move forward,” says Albert-László Barabási, Robert Gray Dodge Professor of Network Science and University Distinguished Professor of physics at Northeastern.

Barabási’s team is already in discussions with experimental biologists at Harvard to begin testing these drugs in human cell lines.

The interactions of different kinds of proteins within our cells play a key role in orchestrating the complex biochemical reactions that control our bodies. That’s why, Barabási says, the best way to understand how viruses spread is to identify the whole set of the molecular interactions within human cells, and the networks those interactions create as proteins interact with genetic material inside the cell.

“Virtually every disease that we have spreads through a cellular network,” he says. “The virus has a particularly fast way of doing that because it is invading the cell, in this case with 26 proteins, effectively doing a very fast and effective perturbation on multiple points of the network.”

The model, which Barabási originally developed with a group of researchers in 2012 to study other human viruses, also predicted that SARS-CoV-2 could potentially attack cells in the brain. That finding, the report states, could help explain recent reports that early COVID-19 symptoms include the loss of the sense of smell and taste.

The new list of drugs adds to other potential treatments that researchers have already identified. Barabási’s model identified several of those drugs, as well as others that had not been considered.

Quickly after entering the body, SARS-CoV-2 hijacks human cells and retools them into virus-replicating machines. The virus relies on the set of protruding proteins for which all other strains of coronaviruses are named—a set of spikes resembling those of a crown. As those viral proteins latch on to the proteins of a healthy cell, they disrupt basic functions within it, and make it churn out millions more versions of the virus.

The first step in modeling viral infection was understanding which proteins SARS-CoV-2 attacks to hijack human cells. Researchers recently reported that there are 332 of those proteins.

Barabási’s toolset modeled the role of the 332 proteins targeted by the coronavirus and predicted other mechanisms those proteins could trigger within the cell to lead to the symptoms of COVID-19.

The model focused on drugs that could fight the virus not just by neutralizing its spike proteins as they first targeted human cells, but by disrupting other interactions within human proteins and genes. These treatments target areas within the cell where the virus works, instead of directly targeting the virus, and could influence the way the proteins that SARS-CoV-2 needs to thrive are encoded.

“By simply identifying what neighborhood the virus hits, we can identify what are the potential drugs that are hitting in the same neighborhood, and therefore could be effective against the virus,” Barabási says.

And, he says, the best drug candidates will probably be those that don’t target the proteins that SARS-CoV-2 initially attacks but work within the same subcellular neighborhood.

“Very few drugs on the market are directly targeting the disease proteins themselves,” Barabási says. “Simply knowing what proteins the virus targets will not be enough for us to find the drug, we need to understand very well the network’s neighborhoods of those hitting points.”

Marinka Zitnik, an assistant professor of biomedical informatics at Harvard Medical School, used machine learning to help Barabási’s group comb through available data on drugs already on the market or in clinical trials that could be repurposed to treat COVID-19.

Joseph Loscalzo, Hersey Professor of the Theory and Practice of Medicine at Harvard Medical School, chairman of the Department of Medicine, and physician-in-chief at Brigham and Women’s Hospital, helped the team discard potential drug candidates that could be significantly toxic or impossible to administer intravenously or orally.

The team’s progress and updates are being released online as soon as they are available, in an effort to help the global scientific community as it works at breakneck speed to solve the COVID-19 crisis. A report with more data and information will be released as a preprint online and submitted to a peer-reviewed journal for publication, Barabási says.

Telehealth might be best as a supplement to office visits, not a replacement