Home » Health News » One in five operations may lead to surprise bills, even when surgeon and hospital are in-network 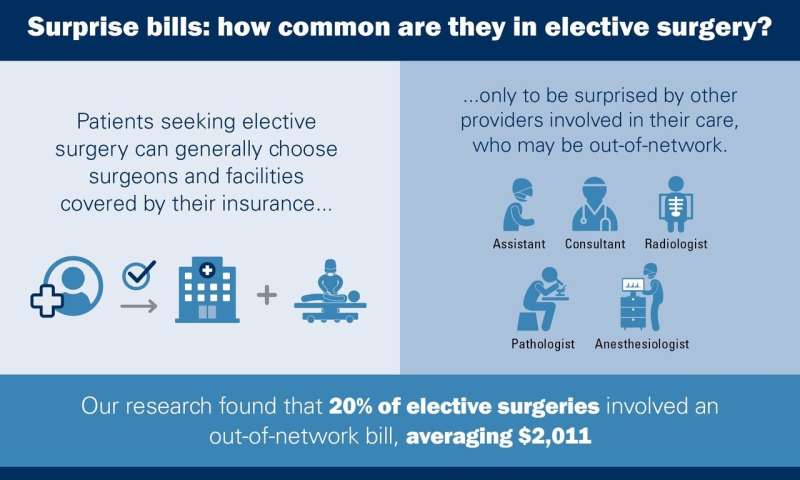 As if recovering from surgery wasn’t hard enough, a new study shows that one in five operations could result in an unwelcome surprise: a bill for hundreds or thousands of dollars that the patient didn’t know they might owe.

On average, that potential surprise bill added up to $2,011, a team from the University of Michigan reports in the new issue of JAMA. That’s on top of the nearly $1,800 the average privately insured patient would already owe after their insurance company paid for most of the costs of their operation.

All the patients in the study chose a surgeon who accepts their insurance, and had one of seven common, non-emergency operations at an in-network hospital or at an outpatient surgery center.

But they still ended up potentially owing large sums to pay other people involved in their operation or their follow-up care. The average potential surprise bill ranged from $86 for medical imaging specialists involved in a hysterectomy, to more than $8,000 for surgical assistants involved in a breast lumpectomy. These out-of-network bills were significantly more common for patients who had complications after surgery.

If the patient had an outpatient procedure with an in-network surgeon, but it took place at an ambulatory surgery center that was out-of-network, the potential surprise bill could add up to more than $19,000.

“These are eye-popping numbers, which most clinicians are likely unaware of, and which patients can’t prepare for,” says Karan Chhabra, M.D., M.Sc., the study’s first author and a National Clinician Scholar at the U-M Institute for Healthcare Policy and Innovation, which funded the study.

The study looked at the claims that a large insurance company received from in-network and out-of-network medical providers for more than 347,000 patients under age 65 who had one of the seven operations between 2012 and 2017. Even though all the lead surgeons and the surgery locations were in-network, 20.5% of the operations led to an out-of-network bill.

The researchers couldn’t see the actual “balance bills” that patients were told they must pay, which may vary depending on the insurance plan’s provisions. Some insurers may pay part of the bill for out-of-network providers, while others charge patients for the entire added cost.

For the study, the researchers tallied all out-of-network charges billed to the insurer for the care episode related to each operation, and deducted the insurer’s typical payment for that care.

The findings shine a light on the need for federal-level measures to address surprise billing, says Chhabra, a research fellow in the Department of Surgery at Michigan Medicine, U-M’s academic medical center, and a house officer at Brigham and Women’s Hospital in Boston.

That’s because state-level policies can’t regulate what are called self-insured health insurance plans—the kind of plan that covers most people who get insurance through their jobs or the job of a family member.

Congressional committees have worked on legislation to address surprise billing but have still not agreed on a final legislative fix, though several states have passed provisions that provide some protection.

Depending on what state the patient lives in, the risk of getting a surprise bill differed from the average. In some states, less than 10% of the operations covered by the insurer led to a surprise bill, while in others more than a third did. Southern states had the highest proportion of surprise bills.

The team matters, not just the lead surgeon

“Even if a patient takes care to choose an in-network surgeon, and an in-network hospital or surgery center, they have little to no control over the rest of the team involved in their care, and whether they take part in their insurance plan,” says U-M surgery chair Justin Dimick, M.D., M.P.H., senior author of the new paper. “This study reveals the extent and size of the bills that these other providers can incur if they’re not in-network.”

Chhabra notes that he and his colleagues were especially surprised that 37% of surprise bills sought payment for “surgical assistants.” This is a catch-all term for other people with hands-on involvement in the operation or in post-operative care. They include additional surgeons, nurse practitioners or physician assistants with surgical training, or mid-level providers called certified surgical assistants or sometimes surgical first assistants.

When such a person was involved and wasn’t part of the insurance network, the average bill for their services was $3,633.

Surgical assistants or their employer can bill the insurance company separately for their services, and seek payment above and beyond the rate that the insurer might have agreed on with the hospital.

Other types of physicians also submitted out-of-network bills as part of the care time. For instance, 37% of operations involved an out-of-network anesthesiologist, but the potential average surprise bill from them was lower than for surgical assistants, at around $1,200.

“Even if patients do their homework before they have elective surgery, this study shows they can be at risk of receiving large bills they never expected, from providers they never met or even knew about,” says Chhabra.

He notes that when all providers are in-network, such as at a large health system with employed physicians, the patient doesn’t necessarily need to know or choose which pathologist looks at the tissue removed from them, which radiologist looks at the medical images made of them, or which specialist has the lead in the intensive care unit where they recover.

But when some of those providers are out-of-network, it can make a major difference in their ultimate costs.

It’s possible that in many of the cases in the study, the lead surgeon had no idea that some of the people involved in the operation or post-op care were outside the patient’s insurance network.

This may be especially true for patients who have narrow-network coverage that they bought on a federal or state marketplace. In the study, more than a quarter of operations paid for by Marketplace plans involved a surprise bill.

“We as surgeons need to make sure we are doing right by our patients,” Chhabra says. “This disproportionately affects vulnerable populations, such as those who have weaker insurance coverage, and those with more health issues. For them, a surprise bill is adding insult to injury.”

He also notes that provider groups may use out-of-network bills as a bargaining chip to try to get higher reimbursement from insurers if and when they become part of their network. Even if they never send the bill for the balance to the patient, the increased cost to the insurer could mean higher costs for everyone covered by that company.

What patients can do

In light of their findings, the authors advise patients to take care to check their insurance network, and ask about billing practices, when scheduling an operation.

The body language tell that reveals a lot about your relationship