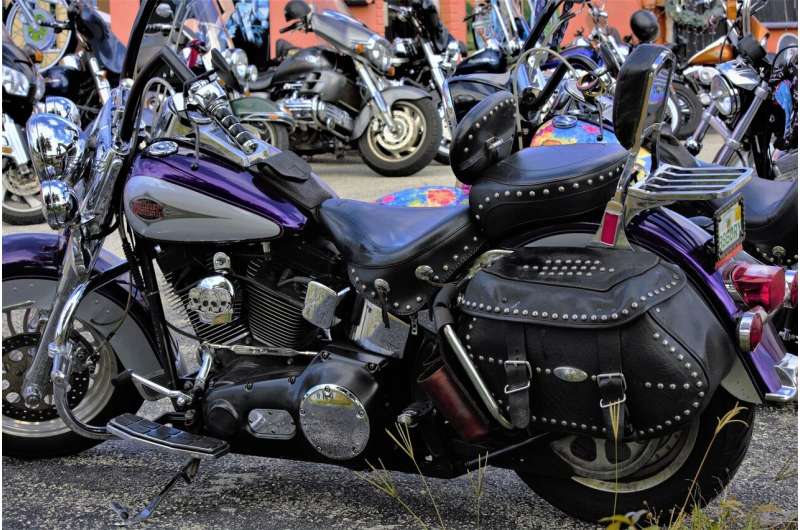 The number of organ donations and organ transplants goes up markedly during large motorcycle rallies, according to a newly published analysis led by researchers at Harvard Medical School and Massachusetts General Hospital.

The research, which appears Nov. 28 in JAMA Internal Medicine, shows that in the regions where the seven largest motorcycle rallies were held throughout the United States between 2005 and 2021, there were 21 percent more organ donors per day, on average, and 26 percent more transplant recipients per day, on average, during these events, compared with days just before and after the rallies.

Large-scale motorcycle rallies attract hundreds of thousands of attendees, and previous studies have shown that these events are accompanied by increases in traumatic injuries and deaths from motor-vehicle crashes.

For the new study, the researchers wanted to know whether these events corresponded to increases in organ donation and transplantation in the regions where they were held.

The researchers posed several questions, including whether organ donations rose along with trauma-related fatalities. They did. Also, was there a difference in the quality of organs donated due to clinical or demographic differences in donors during rallies. There wasn’t.

“The spikes in organ donations and transplantations that we found in our analysis are disturbing, even if not entirely surprising, because they signal a systemic failure to avoid preventable deaths, which is a tragedy,” said study first author David Cron, HMS clinical fellow in surgery at Mass General. “There is a clear need for better safety protocols around such events.”

“At the same time, it is important for transplant communities in places where these events are held to be aware of the potential for increased organ donors during those periods. Organ donation is often called the gift of life, and we should make sure that we do not squander it and can turn any of these tragic deaths into a chance to potentially save other lives,” added Cron, who is also a research fellow at the Center for Surgery and Public Health at Brigham and Women’s Hospital, where he is part of a group interested in understanding how policy decisions and other factors, both inside and outside of the health care system, affect efforts to improve the supply of organs for transplantation.

Using data from the Scientific Registry of Transplant Recipients for deceased organ donors age 16 years and older involved in a motor vehicle crash and recipients of organs from those donors from March 2005 to September 2021, the researchers estimated changes in the incidence of donation and transplants in regions that hosted rallies.

They compared the dates of rallies with the days before and after the rallies. To rule out the influence of other factors not related to bike rallies, the researchers also compared figures from the rally locations with other regions not affected by the rallies and then looked at trends in the rally regions at other times of the year.

They also compared the demographic and clinical characteristics of the donors and the quality of organs donated during rally and non-rally times. They found no significant differences.

Key characteristics of transplant recipients, such as how long they had been waiting for an organ and how severe their illness was at the time of transplant, were also similar whether there was a rally happening or not. This finding, the researchers noted, indicates that the increase in the number of organs available was not enough to relieve the critical shortage of donor organs that the nation faces, even for a brief period.

Cron also noted that the available data were not detailed enough to say whether the donors perished in motorcycle crashes or in passenger vehicles.

Bike rallies are generally large, crowded events that take place in rural areas or small towns with traffic infrastructure intended for much smaller populations and far less traffic, the researchers noted. This means that to increase overall safety for all motorists and pedestrians, event organizers should pay close attention to overall traffic management in addition to encouraging wearing of helmets and safe motorcycle operation.

The seven motorcycle rallies in the study each draw more than 200,000 visitors over the course of several days. Daytona Bike Week in Florida and the Sturgis Motorcycle Rally in South Dakota are 10-day events that each draw 500,000 visitors.

For the towns that hold the rallies and the people who attend, there are many economic and personal benefits. However, understanding all the possible consequences of an event can help organizers and participants plan better to minimize the risk for unwanted “side effects,” the researchers said.

The paper is the latest in a series by senior author Anupam Jena, the Joseph P. Newhouse Professor of Health Care Policy in the Blavatnik Institute at HMS, examining the often-unanticipated impacts on the health system of large-scale public events.

Some of his previous work in this area includes studies that have found that firearm injuries drop nationwide during NRA conventions, that high-risk patients with certain acute heart conditions are more likely to survive than other, similar patients if they are admitted to the hospital during national cardiology meetings, and that people who suffer heart attacks or cardiac arrests in the vicinity of an ongoing major marathon are more likely to die within a month due to delays in transportation to nearby hospitals.

“Nothing in life is ever completely safe. Our priority should be to make risky events like motorcycle rallies as safe as they can be,” Jena said. “But it’s also critical to have a clear understanding of how these events impact the health of individuals and the health care systems that we all rely on so that we can give participants, event organizers, and policymakers the context and data they need to make smart choices.”