Home » Health News » Outsourcing is a matter of time 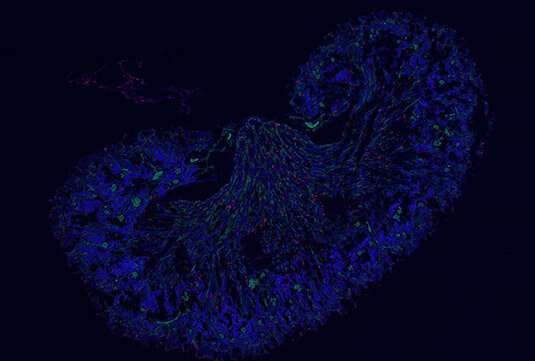 Immune cells found in the mouse kidney at various stages of development are morphologically virtually indistinguishable. It now turns out that these cells are derived from different tissue sources at different stages in the animal’s life.

The innate immune system is the body’s first line of defense against infections and tumors. Its task is to mount an initial, relatively unspecific immune response against invasive parasites and abnormal cells, and to alert the adaptive immune system to the presence of ‘non-self’ molecules—otherwise known as ‘antigens’. Dendritic cells take up these molecules and present fragments of them on their surfaces—which triggers the production of the appropriate adaptive immune response.

Not only dendritic cells, but also macrophages and monocytes are part of the innate immune system. All of these cell types are found in the kidney, an organ that plays a major role in the excretion of toxic substances. Misdirected immune reactions, for instance by the above-mentioned cells, can damage the kidneys. It is still unclear how many subtypes of dendritic cells and macrophages are present in the kidney, and whether or not the various subtypes have specialized functions remains controversial. Researchers at LMU’s Biomedical Center, led by Barbara Schraml, have now identified several subpopulations of dendritic cells in the mouse kidney—and shown that their developmental origin differ in an age-dependent manner. The new findings appear in the Journal of the American Society for Nephrology.

With the aid of transgenically expressed fluorescent markers, Schraml and colleagues were able to follow the developmental fates of dendritic cell precursors. These studies revealed that the dendritic cells found in the mouse kidney are derived from at least three sources. “Although they are of diverse origin, these cells are virtually indistinguishable in terms of their phenotype,” says Schraml. “However, we have now shown for the first time that their site of origin changes with age. Kidneys of newborn mice contain macrophages derived from the yolk sac, that are replaced with time by products of hematopoietic cells, whose precise nature remains obscure. Those cells present in the kidneys of adult mice develop from dedicated dendritic cell precursors. We believe that these various populations differ in their functions, but further studies are currently under way to verify this idea.”

The dendritic cells in the kidneys of adult mice drew the team’s particular attention. “These cells are very peculiar, because they look very much like macrophages. – However, classical macrophages originate from precursor cells that derive from the yolk sac, and we know that they can survive for a long time. The dendritic cells in the adult kidney, on the other hand, appear much later and develop from bona fide dendritic cell precursors derived from the bone marrow,” Schraml explains. In order to determine how these cells behave in the damaged kidney, the researchers studied their responses to known kidney toxins and to reduced oxygen levels. They found that the cells repressed the expression of genes that are involved in antigen presentation, while activating genes for signaling proteins that serve to attract other types of immune cells. “In other words, they adapt their functional role to the new situation. Indeed, we believe that they may lose the ability to activate T cells and acquire the capacity to recruit other classes of immune cells under these conditions. That could in turn imply that they play a prominent role as regulators of the pathological reactions that accompany acute kidney damage.”