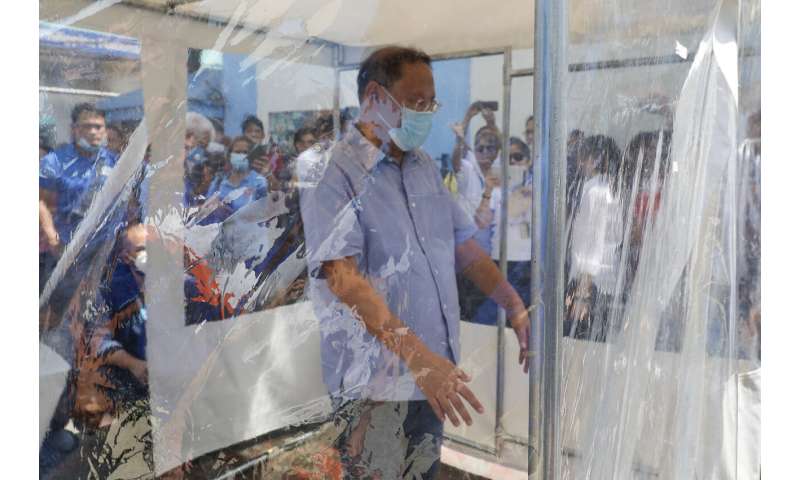 The coronavirus pandemic has taken over daily lives around the globe, overwhelming hospitals, shuttering schools and offices, halting U.S. presidential campaign rallies and world sports while increasing fears about the financial toll.

The intensifying spread of COVID-19 beyond Asia has dashed hopes about a quick containment, even with travel and social events curbed drastically. And political leaders were among those infected or quarantined due to potential exposure.

Asian markets were sinking further Friday, after U.S. stocks had their greatest losses since the Black Monday crash of 1987 and bad European results. Benchmarks in Japan, Thailand and India sank as much as 10%. Losses in mainland China, where the virus is subsiding, were less severe.

In the United States, Congress neared a deal with the Trump administration on a sweeping aid package with sick pay, free testing and other resources to help reassure anxious Americans and calm markets, House Speaker Nancy Pelosi said.

People fretted over the health risks to the elderly, threatened jobs and dwindling savings while caring for children staying home from shuttered schools.

While Washington scrambled to shape an economic rescue package, the European Union pushed back against President Donald Trump’s sharp restrictions on travel from Europe to the United States, slamming Trump’s “unilateral” decision and declaring the virus a “global crisis, not limited to any continent, and it requires cooperation.” 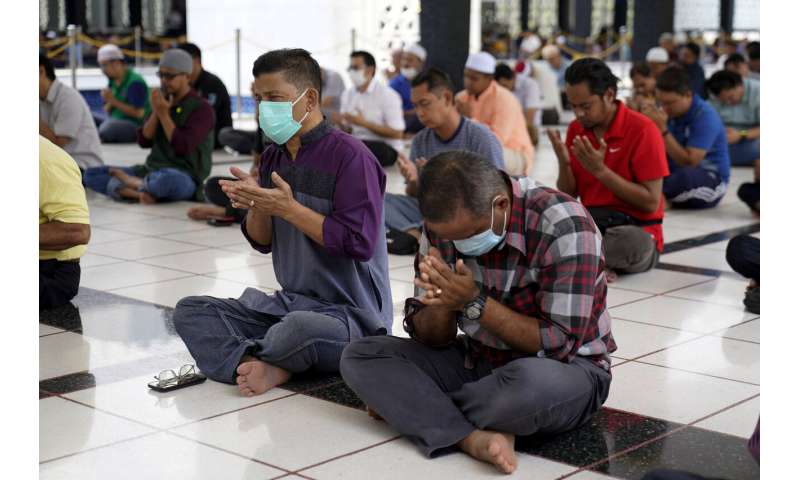 Trump defended his decision to not notify all EU leaders ahead of the announcement. “When they raise taxes on us, they don’t consult us,” Trump said. “I think that’s probably one in the same.”

The spread of the virus in Europe, North America and the Middle East has drawn contrast with waning outbreaks in the hardest-hit nations in Asia.

China, where the virus emerged late last year, still accounts for more than 60% of global infections. But on Friday it reported just eight new cases and seven deaths. More than 64,000 people have been released from hospitals.

With China’s caseload slowing, the government was helping other countries with its expertise. A Chinese medical crew was heading to Italy and surplus supplies were sent to Iran.

Chinese President Xi Jinping told the U.N. leader his nation wants to conduct joint research on drugs and vaccines and offer “as much assistance as it can” to countries where the virus is spreading. State media reported Xi told U.N. Secretary-General Antonio Guterres by phone that economic and daily life are gradually returning to normal in China thanks to “arduous endeavors” at prevention and control. 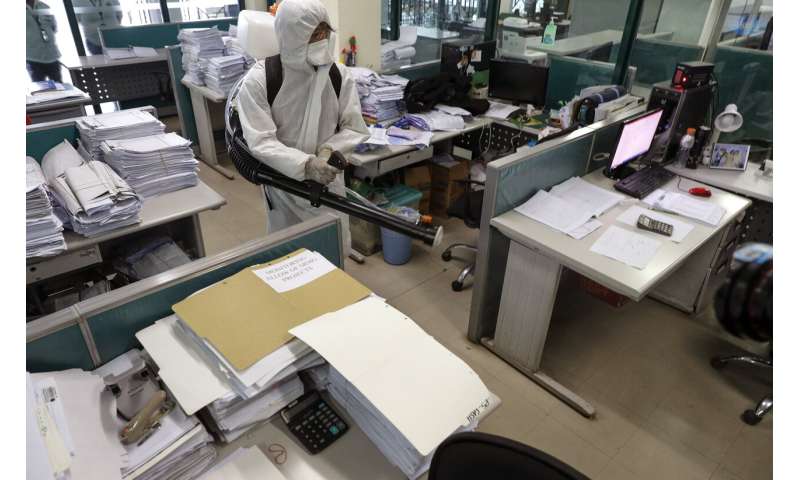 The pandemic’s new epicenter is Europe. Italy’s death toll topped 1,000 on Thursday with more than 15,000 confirmed cases. France, Spain and Germany all exceeded 2,000 cases each.

In Italy’s hardest-hit Lombardy region, hospitals were overwhelmed with both the sick and the dead. The country’s restaurants, cafes and retail shops closed in a lockdown on personal movement, though grocery stores, pharmacies and markets were allowed to operate.

France, Ireland, Denmark, Norway, Lithuania Algeria and Slovakia shut down their schools, and Europe’s most successful soccer team, Real Madrid, put all its players into quarantine after one tested positive. The Czech government tightened border checks for some countries, and Slovakia closed its international airports and ground transport hubs. 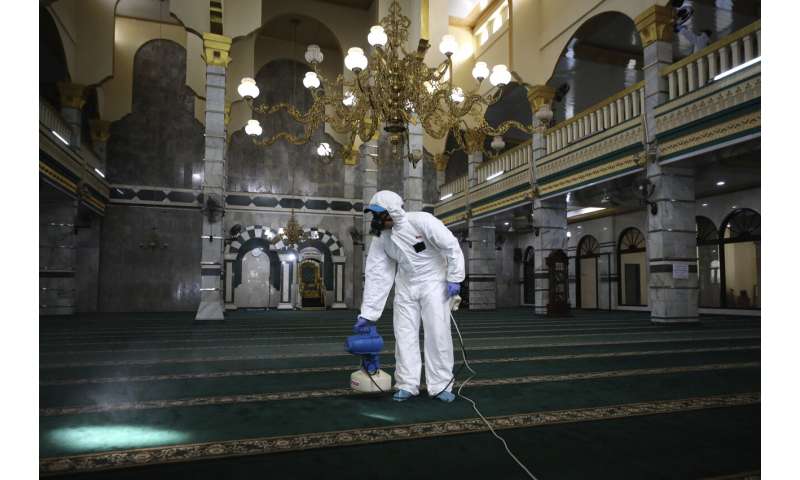 Lawmakers in Denmark approved a temporary law giving authorities the ability to ban access to public places and stores and force people to undergo tests. Estonia declared “an emergency situation,” meaning no gatherings in public spaces.

Europeans were adjusting to new U.S. travel restrictions, which exempted Britain and Ireland, raising questions about the policy’s coherence.

In Iran, which exceeds 10,000 cases and 400 deaths, Foreign Minister Mohammad Javad Zarif urged the Trump administration to immediately lift sanctions over the country’s nuclear program. He said they made it difficult to import medicine and medical equipment, including to identify and treat coronavirus patients. 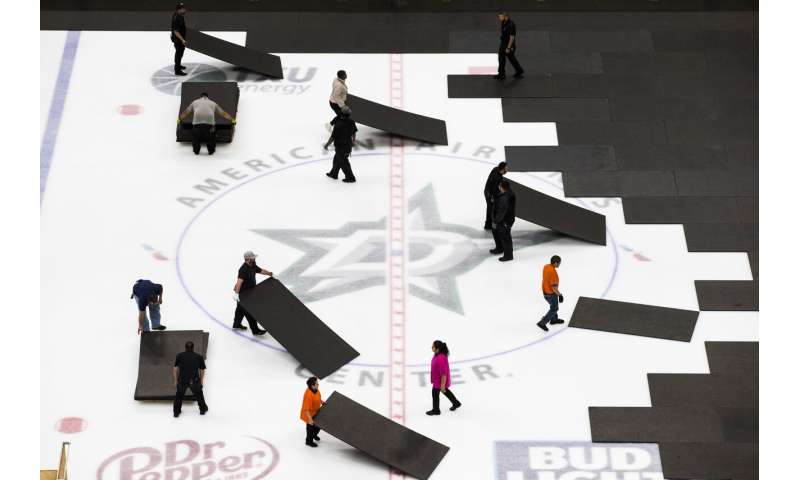 Pakistani authorities quarantined about 4,000 pilgrims in tents and buildings in the southwestern border town of Taftan upon their return from Iran, officials said Friday.

Amid the fear, it can be easy to forget that more than half of the world’s 128,000 people infected have already recovered. Most patients have only mild or moderate symptoms such as a fever or cold, though severe symptoms including pneumonia can occur, especially in older adults and people with existing health problems.

Canadian Prime Minister Justin Trudeau was isolating himself after his wife tested positive. She said she was experiencing uncomfortable symptoms but “I will be back on my feet soon.” Trudeau’s office said he has no symptoms of COVID-19 but will stay in isolation for 14 days.

Australian Home Affairs Minister Peter Dutton is in isolation at a hospital after testing positive. In Spain, a leading member of a far-right party tested positive for the virus. Several U.S. politicians were quarantining themselves as a protective measure after coming in contact with COVID-19 patients. 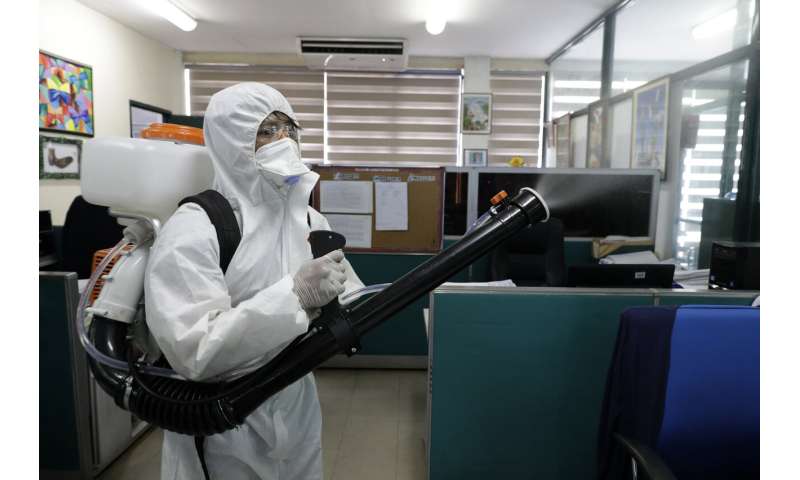 The Brazilian president’s communications director tested positive just days after meeting with Trump at his Mar-a-Lago resort. Despite that, Trump has no immediate plans to be tested or to self-quarantine, the White House said.

Trump did, however, halt his trademark political rallies, leaving the U.S. presidential campaign trail all but empty with leading Democratic contenders Joe Biden and Bernie Sanders canceling events, too.

Across the U.S., where cases have topped 1,600, a sense of urgency was pervasive. Professional athletes and entertainers were among those infected.

Schools emptied of students and workplace cubicles went vacant. Crowded gatherings were restricted from New York to California, and dozens of cultural hubs were closed. Disneyland and Disney World will close in coming days. And sports fans couldn’t cheer their favorite teams from the safety of their living rooms since basketball, baseball, hockey and other leagues canceled and postponed games. 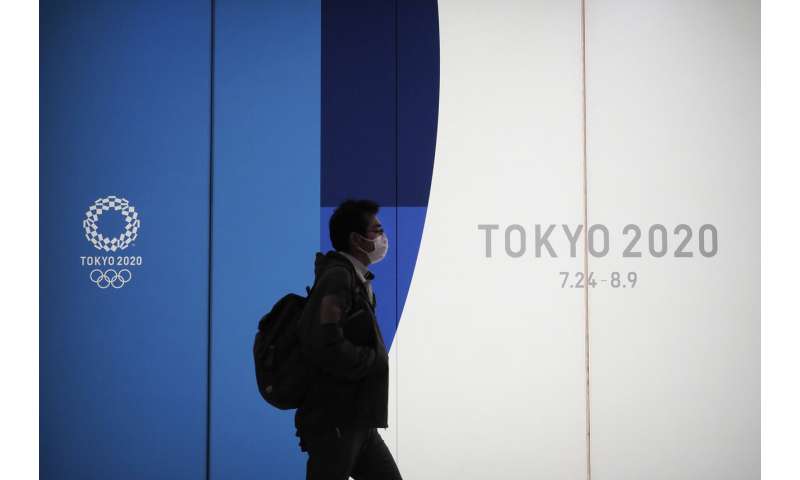 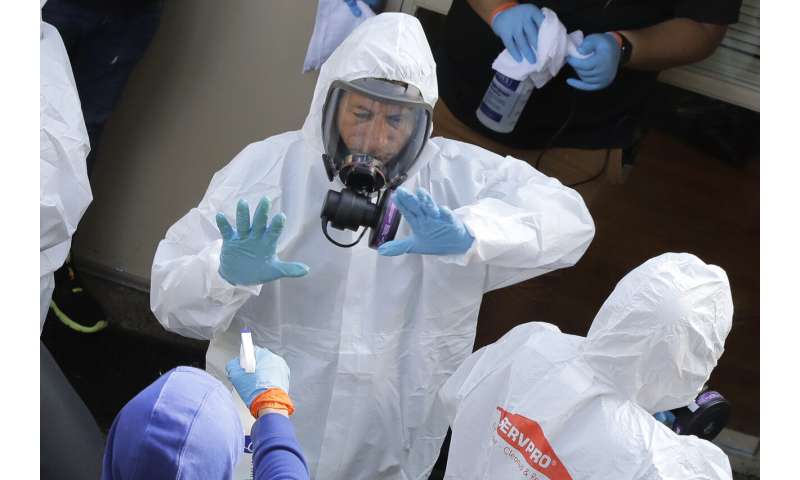 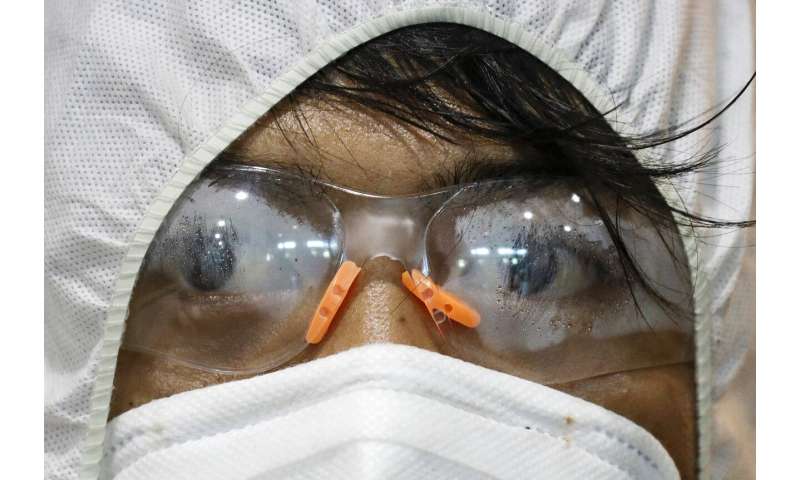 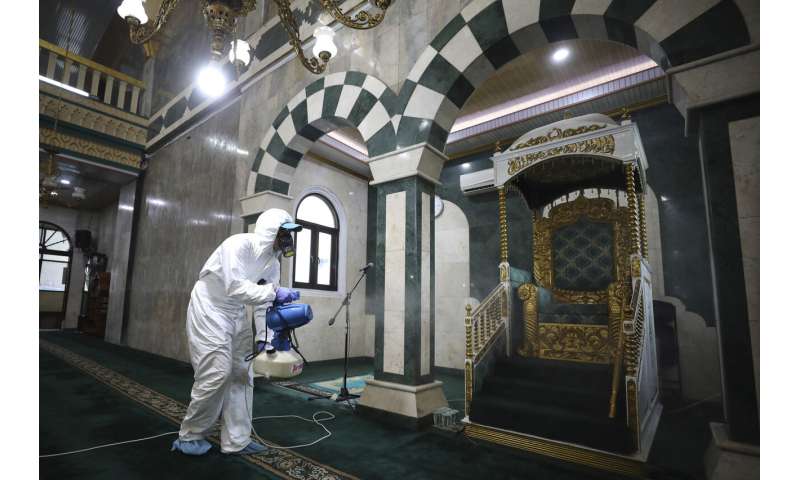 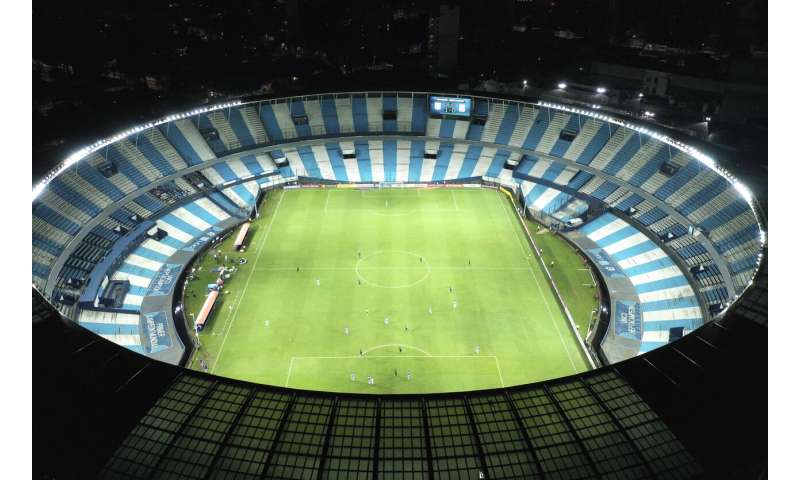 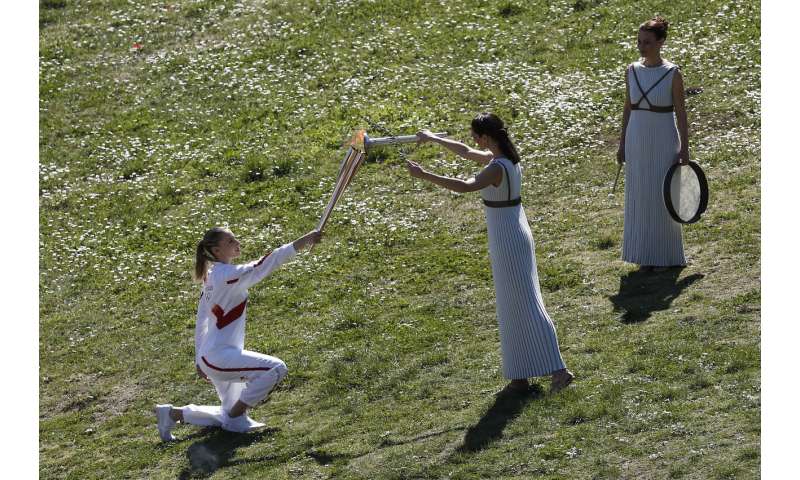 Workers disinfected schools, public transit vehicles, government offices and places of worship. In Indonesia, the world’s most populous Muslim country, the government launched a cleaning campaign for 10,000 mosques. The religious affairs minister called on each mosque to roll up carpets and spray disinfectant, while also urging Muslims to not shake hands or share a kiss on the cheek to avoid spreading the virus.

Amid all the cancellations in sports, the biggest athletic competition of them all—the Summer Olympics—was still firmly on the calendar. The International Olympic Committee and the Tokyo organizing committee were not considering canceling or delaying the Games, “absolutely not at all,” Japan Olympics minister Seiko Hashimoto said.

A cancellation or postponement would ripple in thousands of directions, hitting sponsors, broadcasters and host businesses, plus the 11,000 Olympic and 4,400 Paralympic athletes now in training for their once-in-a-lifetime chance at glory. A flame-lighting ceremony was held Thursday in Greece, another sign the IOC hopes to go ahead with the Games now scheduled to open July 24.

One in seven avoided the ED in early pandemic