Home » Health News » Parkinson’s disease: The heartbreak of being a parent diagnosed in your 30s

Single mum Sarah, 44, has Parkinson’s disease and Callum-James is autistic, so their rare holidays are precious times to unwind. But as they set off to enjoy the sea air, another mother looked at Sarah’s wobbly, unsteady walk and panicked. “This woman grabbed her child and moved away from me like I was going to harm her,” Sarah recalls. “That really upset me as my own son was there. “He just looked at this woman and said to her, ‘My mum’s not a monster, her brain just doesn’t work very well’.” Sarah, a nursery nurse before her Parkinson’s took hold, felt humiliated by the experience. “I just wanted to get away from there, get home and close the door,” she says. “People just don’t understand.

“Sometimes they use humour but a lot of times people are just judging you. They think you’re drunk.”

Sarah was told she had Parkinson’s when she was 37, making her one of the 1.2 per cent of those diagnosed with the disease who are under 50.

We tend to think of it as an old person’s condition, affecting the likes of Billy Connolly, 77, and Ozzy Osbourne, 71, but Young Onset Parkinson’s disease can affect people in their 20s. In rare instances, the symptoms – tremors, slow movement, imbalance and stiffness – can appear in teenagers or even children.

Sarah, from Thornley, Co Durham, was a fit and active woman in her 30s and saw three consultants before finally getting her diagnosis in 2013, two years after her ­symptoms began.

“Something I really miss is dancing,” she says. “I used to love doing rock ’n’ roll and ballroom and I was teaching part-time classes. Now I feel like Parkinson’s has taken away my dignity.” 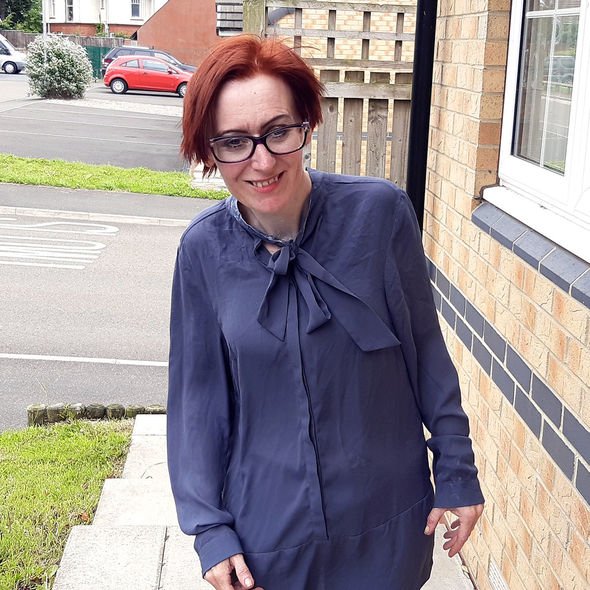 She also finds the ­constant need to explain her condition exhausting, such as the time she was playing football with her son, who is 10, near home and was slurring her words because of a problem with medication.

A passerby noticed, jumped to the wrong conclusion and started to harangue her about it. “They said I should be reported to social services because I was drunk,” Sarah remembers. “I said, ‘I’m not drunk, my tablets are not working, I’ve got Parkinson’s.’ You’re always trying to explain yourself,” she adds in exasperation.

Sarah is one of three young Parkinson’s patients sharing their experiences with the Daily Express for today’s World Brain Day, which this year is focused on raising awareness of Parkinson’s.

A struggle to get a diagnosis is something they have in common.

“I was told I’d had a stroke, that there was something wrong with my brain but no one could put their finger on it,” says married father-of-one Nathan Watt, 34. “But it doesn’t matter about age, it’s about the symptoms you are presenting. It can happen at any time.” 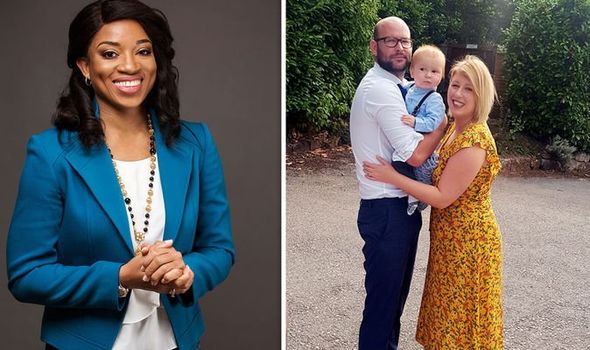 Lorry engineer Nathan’s Parkinson’s diagnosis was confirmed in October last year following a DaTSCAN, a test that can help to indicate Parkinson’s by measuring dopamine levels in the brain.

The previous year he had been put on a 12-month NHS waiting list to see a specialist consultant, so opted for private treatment just before Christmas 2018. His wife Leona, 29, says: “They conducted an MRI scan and did some assessments and came to the conclusion that he was suffering from depression. We weren’t convinced that that was the case and throughout the first part of last year, his symptoms were getting worse.

“Then he got laid off from his job because he was struggling to do the work.”

Nathan’s symptoms started five years ago and doctors initially thought it was carpal tunnel syndrome affecting the nerves. Some people wait years to get their condition confirmed because of the complexities of the illness which still lacks a definitive diagnostic test. It’s a major concern given that Parkinson’s diagnoses are set to rise by nearly a fifth by 2025.

When the couple’s son Charles was born two-and-a-half years ago, it became very clear that Nathan’s problems were not depression or simple nerve damage.

“We took him to swimming lessons and Nathan struggled to hold him in the water,” Leona recalls. “Then he couldn’t change his nappy any longer or get his socks on. Trying to dress our little boy in the morning became hard. It was all these little things. Looking back now he got worse quite quickly but we didn’t realise then with life being so busy.”

Nathan worries he may soon not be able to work at all. He no longer has the dexterity to screw nuts and bolts together, but managed to find an office role. Now he’s not sure how long that will last.

Parkinson’s has put a “massive strain” on the couple’s relationship for whom it was “love at first sight” seven years ago. Leona says: “Our little boy is into absolutely everything. He wants to play and fight and throw Daddy on the floor, all the things that unfortunately Nathan cannot do. I have to do everything – the finances, cooking and cleaning.”

Nathan had been due to start ­physiotherapy prior to lockdown but it’s been put on hold so walking is problematic. He struggles with speech and is easily fatigued. His increasing rigidity prevents him from being able to button up his own shirts. “People see me and what they think is a healthy young man but that’s not the case at all,” Nathan explains. “I’m open to telling people I’ve got Parkinson’s. Prior to ­lockdown, I went to the supermarket and I couldn’t get my cards out of my wallet.

“There was a big queue of people behind me and everyone was staring so I told everybody the reason why I couldn’t get my cards out and how I felt under pressure and that they were judging me.” Dr Arthur Roach, director of research at Parkinson’s UK, understands the unique difficulties faced by young people with the disease.

“Young onset Parkinson’s throws up its own challenges, like juggling work and family life while living with a debilitating condition,” he says.

The expert says the Covid-19 ­pandemic has also added to the burden in unforeseen ways.

“People have seen their symptoms get worse, had healthcare appointments cancelled and struggled to access food and medication,” he says.

The charity is urging the Government to “protect life-changing research by setting up a targeted matching fund”. 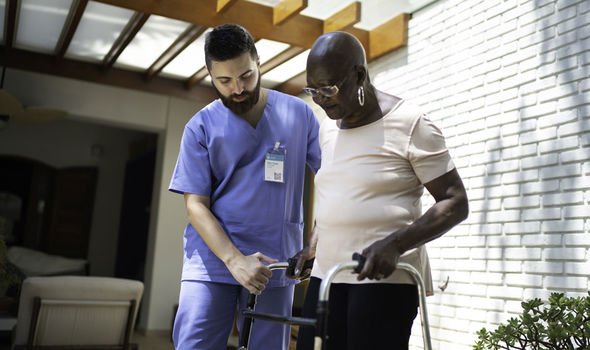 Nathan and Leona agree. The couple are struggling to get in touch with the Parkinson’s nurse team at their hospital in Stoke-on-Trent due to it operating with a “skeleton staff” in the pandemic. They say despite public assurances the NHS is fully reopened for patients seeking routine treatment, that has not been their experience.

“I’ve tried to get someone to speak to Nathan about his medication but there’s no answer on the phone at all,” says Leona in exasperation. Nathan adds: “It’s very depressing, I feel scared of the future.”

Omotola Thomas was 29 when she had her first symptom, a slight twitching in her fingers. The mum of two had been moving around the world with her husband Femi, following his job, ­living in Nigeria, America and South Africa, which contributed to a six-year delay to

She had been told she had a nerve disorder called essential tremors and it was “nothing to worry about”.

Parkinson’s was not confirmed until she moved to the UK. She now lives in Surrey with Femi, and their son Teyi, 13, and daughter Mimi, 11.

“The toughest part for me is the cognitive impairment,” explains Omotola, 39, a systems engineering graduate with a masters in project management. “I know how my brain used to work before. If I don’t prepare myself for ­conversations ahead of time now, I run into mental roadblocks and cannot coherently articulate myself, which is frustrating for me.”

Omotola is no longer able to work but is a Parkinson’s advocate and ambassador for the World Parkinson’s Congress. She says she was relieved when doctors finally confirmed what she had already long suspected.

“I would lose my sense of smell and balance, my gait was impaired,” she says. “My memory, cognition and handwriting – it literally felt like my body was falling apart. Finding an umbrella term for what was wrong with me where I could group ­everything together rather than it being

50 million different things made it easier.”

She remains upbeat but acknowledges the challenges are always there.

“Sometimes it’s just being tired and not being able to function solely as a mum in terms of cooking or helping my children with their homework,” she says. “My son is 13 and he is smarter than he should be so trying to match him in a verbal argument is difficult and that exasperates me.”

For World Brain Day she has helped create a video highlighting how Africans with the condition are supported and is part of a global community called PD Avengers. It is open to anyone affected by Parkinson’s.

“Our vision is to end Parkinson’s disease,” she says. “And one of our core missions is

to unite all the millions of voices to prove that Parkinson’s matters and to build a sense of urgency.”

The real reason you get dry eyes

No smoking four weeks before operation cuts risks: WHO