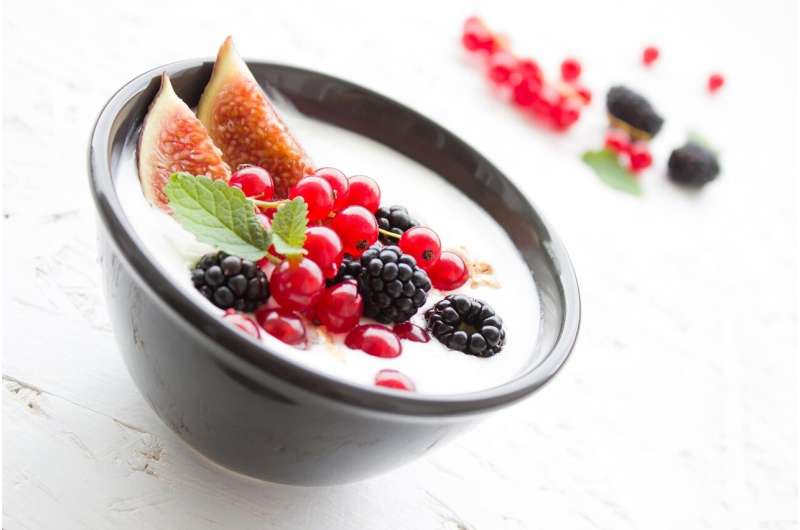 The study found that yogurt containing the probiotic Bifidobacterium lactis BB-12 worked better than a placebo at maintaining the community of bacteria in the colon. The findings were so positive that the NIH funded an additional follow-up study.

“This finding provides important new insights into the mechanisms by which the probiotic, BB-12, may protect against antibiotic-associated diarrhea,” said study co-leader Claire Fraser, Ph.D., Professor of Medicine and Dean’s Endowed Professor of UMSOM and Director of the UMSOM Institute for Genome Sciences. “The new insights that we obtained regarding BB-12 reflect the multi-omics approach that we used in our study. This was possible only because of the different expertise that each of the principal investigators brought to this collaboration.”

In the study, 42 healthy volunteers were randomly assigned to consume a daily serving-size container of yogurt containing BB-12 along with a standard week-long regimen of the antibiotic amoxicillin clavulanate. They continued to consume the yogurt every day for a week after finishing the antibiotic. An additional 20 participants served as the control group and were randomly assigned to consume a daily yogurt without the probiotic for two weeks while also taking the same antibiotic regimen.

The researchers found that levels of the short chain fatty acid acetate, a beneficial metabolite produced by the microbiota, were reduced in all subjects after taking the antibiotic; however, the reduction in acetate was significantly greater in subjects receiving the placebo yogurt as compared with BB-12 supplemented yogurt. Acetate levels in subjects who received BB-12 also returned to baseline levels by 30 days, while they remained below baseline in subjects receiving the placebo.

About one in five people who take antibiotics develop antibiotic-associated diarrhea due to the drugs disrupting the healthy gut microbiome. Patients may stop taking their medications early after developing diarrhea, which could cause their original infection to persist. A small percentage may develop a life-threatening infection with the bacteria C. difficile, which can reside in the gut but is usually kept in check by good bacteria in the microbiome.

“An important reason why our study may have demonstrated positive results may be the timing of the probiotic administration on the day antibiotics were initiated by the study volunteers,” said study co-leader Daniel Merenstein, MD, Professor of Family Medicine and Director of Research Programs for the Department of Family Medicine at Georgetown University School of Medicine. “Starting the probiotic as early as possible, before the antibiotic symptoms have progressed, may result in a greater opportunity for the probiotic mechanisms to be expressed and may ultimately lead to more beneficial clinical outcomes.”

The researchers plan a follow-up study to further explore this question and decide when is the best time to consume a probiotic.

“This exciting clinical study was enabled by mass spectrometry-based quantitation of acetate which was a key endpoint important to assessing the effect of the BB-12,” said study co-leader Maureen Kane, Ph.D., Associate Professor of Pharmaceutical Sciences and Executive Director of the UMSOP Mass Spectrometry Center. The mass spectrometry-based approach, which detects molecules according to their molecular mass, allowed for accurate and precise determination of the amount of acetate. It also allowed for the determination of several other short chain fatty acids within the biological samples obtained from patients.

“The School of Pharmacy’s Mass Spectrometry Center lends its expertise to a wide array of research studies and projects, demonstrating the enormous value of this technology,” said Natalie D. Eddington, Ph.D., FAAPS, FCP, Professor and Dean of the University of Maryland School of Pharmacy. “Working with 17 mass spectrometers, our faculty, staff, and graduate students contribute to discoveries that span basic biology and medicine to technology development and translational research.”

The New Rules of Getting a Haircut