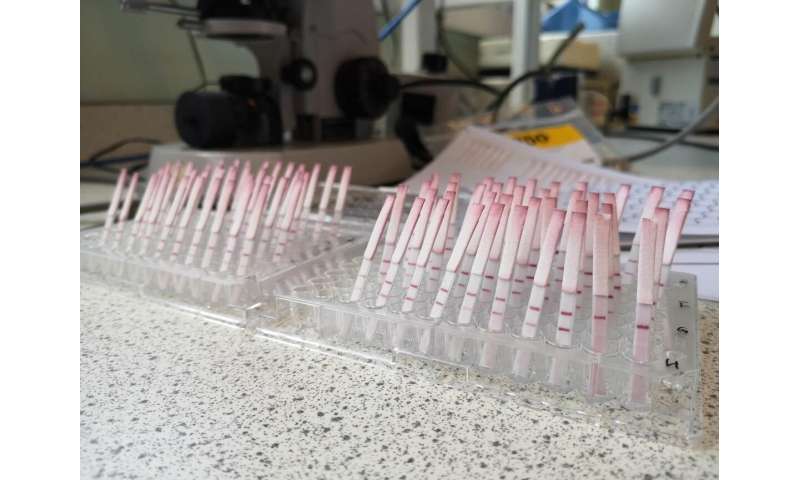 Researchers from the University of Southampton are exploring whether a point of care diagnostic testing approach they have developed could be used for the rapid, inexpensive testing of COVID19.

Staff at the University’s Zepler Institute for Photonics and Nanoelectronics (ZIPN) have previously developed laser patterned rapid testing kits, similar to the commonly available pregnancy test, to provide an affordable pathway to diagnose different disease-related biomarkers within a timeframe of 10 – 15 minutes.

Using a patient’s nasal swab, they now hope that the test they have developed can detect the presence of the COVID19 virus via a specific viral protein, and initial results are very encouraging. The project is still in its early stages but the ZIPN team and their partners in the University’s Faculty of Medicine have just been awarded seed funding support from the Rosetrees Trust and the John Black Charitable Foundation, which will accelerate the development of this rapid test.

Current rapid tests look for the presence of antibodies produced in response to the virus, whereas the test developed at the University of Southampton would detect the presence of the virus itself.

If the test is successful in detecting the virus itself, it would provide an answer similar to the more expensive, laboratory-based RT-PCR tests that are being used routinely, as standard, across the world.  Huge demand on these RT-PCR tests has triggered a shortage in the supply of the reagents needed to perform them and places strain on public health services charged with meeting testing targets.

The research teams in ZIPN and the University’s Faculty of Medicine have tested a small number of swab samples taken from COVID19 patients and shown that the prototype test can detect the virus in patients with high viral loads. The team are doing further extensive work to increase the sensitivity of the test and hence its usefulness to identify patients early on in their infection, possibly even when they are not showing any symptoms of the disease. If successful, the test would be cheap to manufacture on a large scale and therefore readily affordable and available.

Dr Collin Sones, the ZIPN lead said: “Currently it can take the health services a long time to confirm a diagnosis of COVID19. Patients with symptoms either need to visit specialist testing pods, take and send their own blood samples to a lab, or go into hospital where samples are then taken to laboratories for RT-PCR testing. The research team believes that a rapid viral detection test would alleviate the difficulties associated with the ongoing testing situation and identify potentially infected people who would need to either self-isolate or go to hospital”.

Dr Chris McCormick, who leads the Faculty of Medicine’s team of microbiologists and clinicians, commented that ”Rapid and cheap diagnostic tests are urgently needed to detect the virus. A highly sensitive viral detection assay would allow repeated mass testing of essential workers and then the general public. Moreover, these sort of tests are well suited for use in less-developed countries around the world who do not have easy access to the sort of equipment or resources to do routine RT-PCR”.

Their recent seed funding success will accelerate testing progress and the team aim to be in a position to report the next set of results quickly.