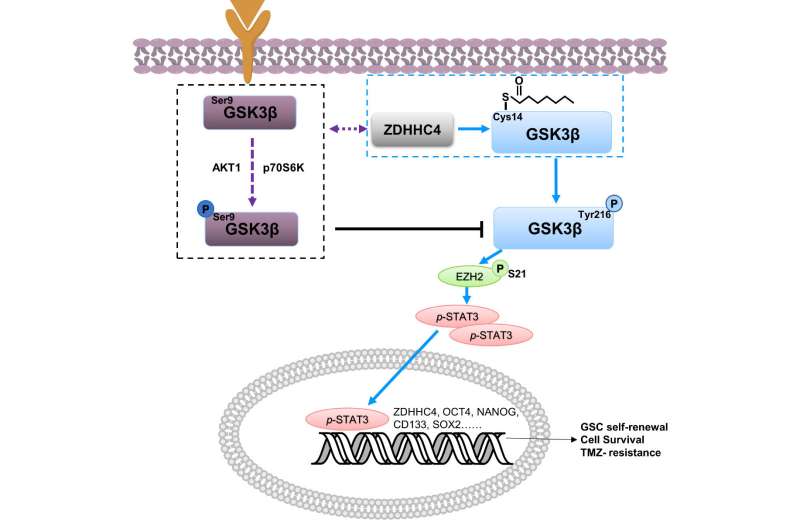 According to a recent study published on Oncogenesis, a team led by Prof. Fang Zhiyou and Pro. Chen Xueran from the Hefei Institutes of Physical Science (HFIPS) of the Chinese Academy of Sciences (CAS) found, for the first time, that palmitoylation regulated the activity of glycogen synthase kinase 3β (GSK3β), activating the EZH2–STAT3 pathway and promoting glioblastoma (GBM) temozolomide (TMZ) resistance and glioblastoma stem cells (GSC) self-renewal.

Due to the blood-brain barrier, TMZ is currently the most commonly used chemotherapeutic drug for the clinical treatment of GBM. However, the mechanism of TMZ resistance is not completely clear. Recent data have implicated the involvement of protein palmitoylation dysfunctions in GBM progression and chemotherapy resistance in some tumor types. Therefore, palmitoylation is a valuable research direction to address TMZ resistance.

In this study, scientists discovered novel mechanistic evidence relating signaling pathways with GSC in GBM. They also investigated the role of palmitoyltransferase ZDHHC4 in activating GSK3β and its target, EZH2/STAT3 in GSC self-renewal.

As a result, ZDHHC4-GSK3β-STAT3 axis, which was involved in TMZ resistance in GBM, was identified. They found that phosphorylation of EZH2/STAT3 signaling was downregulated by reducing ZDHHC4 expression or GSK3β palmitoylation, thereby inhibiting GSC self-renewal, TMZ chemotherapy resistance, and tumorigenesis.

We Tried It: This Jump Rope Workout Is Perfect for Quarantined Parents