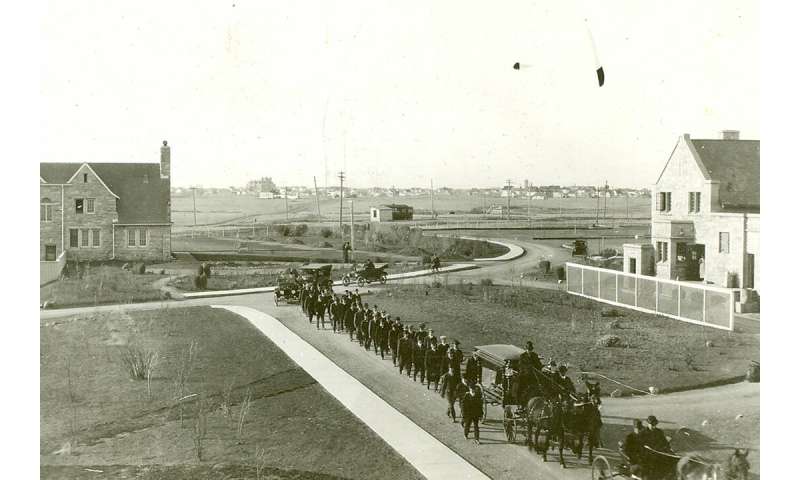 Saskatchewan is wisely learning from its past by insisting on social distancing as it slowly re-opens its business activities amid the COVID-19 pandemic, say University of Saskatchewan researchers.

“Based on how the 1918 Spanish flu spread in our province, relaxing social distancing measures needs to happen gradually, and the public should take time returning to ‘normal’ life,” said history master’s student Derek Cameron. “Even if we ease the restrictions for COVID-19, we should still be careful to avoid history repeating itself.”

The aggressive Spanish flu, which spread globally between 1918 and 1920 as World War I ended, is considered one of the deadliest pandemics in history with up to 50 million deaths, of which 5,000 were in Saskatchewan alone. The devastating, rapid spread of the disease was caused by soldiers returning home and people’s overall compromised immune systems due to the hardships of war.

“As we live through this COVID-19 pandemic, the 1918 influenza event seems a distant piece of history,” said USask history professor Erika Dyck. “For most us, learning about it has been only an exercise, but Derek’s project shows that there are important lessons that we can now take from studying this history.”

Looking at newspapers and public health records of the time, Cameron found that the flu came to Saskatchewan in two waves. He said that how the population responded each time was critically important.

The first wave in spring of 1918 was mild. That’s because injured soldiers with the disease were largely confined to hospitals and their homes, so infections in the province were low. Soldiers returning from Europe were likely infected as they passed through Camp Exhibition, a military camp near Regina where there was a high turnover of troops, Cameron said.

By October, the authorities understood the seriousness of the flu and put Saskatchewan in lockdown by forbidding gatherings and closing down theatres, schools and churches. People were advised to wear masks, stay at home, and distance themselves from other people—the same measures taken today with COVID-19.

“But when the war ended in November, people decided they wanted to celebrate and went out to meet others and gathered in large groups, disregarding the recommendations from the authorities,” said Cameron. “The relaxed social distancing made the number of cases go up fast, causing a way worse second wave of infections. In fact, there were 2,000 deaths after the celebrations.”

Due to the flu, many people also missed routine vaccinations for other diseases. Cameron found that 1920s outbreaks of smallpox and typhoid fever in Canada happened because of the missed immunizations.