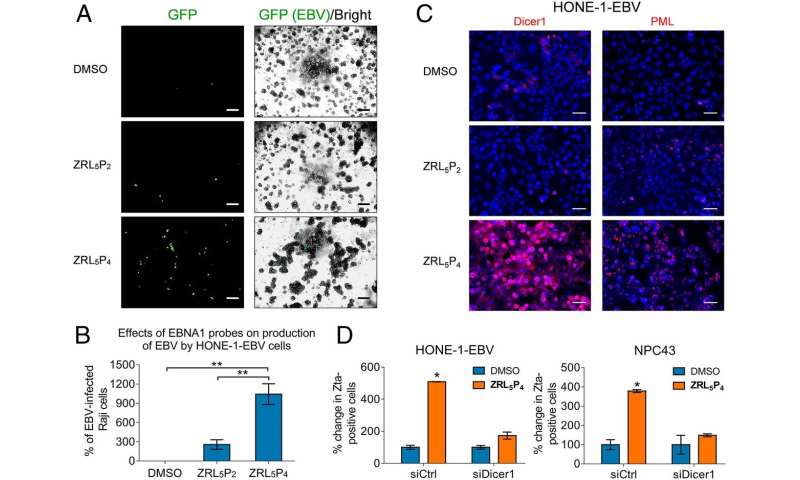 A research team led by Hong Kong Baptist University (HKBU) has developed a novel anti-Epstein-Barr virus (EBV) drug that can selectively disrupt a viral protein produced by EBV, leading to the shrinkage of tumors caused by the virus. It is the first known agent to successfully target the virus and disturb its latency in tumor cells in this way.

A research team led by Hong Kong Baptist University (HKBU) has developed a novel anti-Epstein-Barr virus (EBV) drug that can selectively disrupt a viral protein produced by EBV, leading to the shrinkage of tumors caused by the virus. It is the first known agent to successfully target the virus and disturb its latency in tumor cells in this way.

The strategy of reactivation of EBV from its latency is a new trend in nasopharyngeal carcinoma (NPC) therapy, and some non-specific, anti-viral drugs have recently entered phase one or phase two clinical trials. Our new drug represents the first specific targeted agent to disrupt a single viral protein and to potently reactivate EBV from its latency. These research results were published in the international journal Proceedings of the National Academy of Sciences.

EBV infection can lead to cancer

EBV is a human herpes virus that spreads through close person to person contact. It has infected more than 90% of the human population worldwide.

The human immune system usually suppresses the EBV activity effectively, but in some people the virus continues to exist in the human body and becomes a risk factor for many cancers, such as post-transplant lymphoproliferative disease, Hodgkin lymphoma, Burkitt lymphoma, T/Natural Killer cell lymphomas, some gastric carcinoma, and NPC—a highly prevalent cancer in Hong Kong and southern China.

EBNA1 is the viral protein which is expressed in all EBV-associated tumor cells. EBNA1 plays a vital role in the maintenance of the viral genome and the proliferation of EBV-infected tumor cells.

The research team constructed a new peptide drug with higher affinity to the EBNA1 protein, leading to the disruption of the structure and functions of EBNA1. The tumor cells will thus stop proliferating and die eventually.

Furthermore, the study also showed that the new drug emits unique responsive fluorescence signals once bound with EBNA1 or its metal cofactor. The imaging results demonstrated that the drug can enter the nucleus of EBV-infected cells, where EBNA1 resides, to inhibit their growth and division. It could also potentially be applied to tumor cell imaging in the human body.

After EBV infection, the virus can establish latent infection, remain hidden in the infected cells, and promote pathogenic development of the tumor cells. Disruption of EBV latent and induction of EBV lytic cycle is one of the current strategy to control of EBV-associated malignancy. As a result, the EBV-infected cells will die and will be eliminated by the immune system. The research team discovered that the new drug can reactivate EBV lytic cycle through the disruption of EBNA1, and provides a new mentality of treatment of NPC.

Testing the new drug in a mouse model

The research team tested the new drug in an animal model by injecting it into mice with heavy tumor burden of EBV-positive nasopharyngeal tumors. The new drug could restore the body weights of the mice in the treatment group to healthy levels and it completely shrank the tumors in 70 days. The survival rate was also remarkably raised to 86% for the treatment group while it was only 6% for the control group without any treatment.

“This discovery lays a good foundation for the development of therapeutics for the treatment of EBV-associated diseases such as NPC,” said Professor Gary Wong Ka-Leung.

STI symptoms: ‘Unusual discharge’ is a warning sign of gonorrhoea in men warns the NHS

SARS-CoV-2 variants and their ability to infect mice

As an Adoptive Mom, I Can Tell You This: Adoption is Not the Magic 'Answer' to Abortion