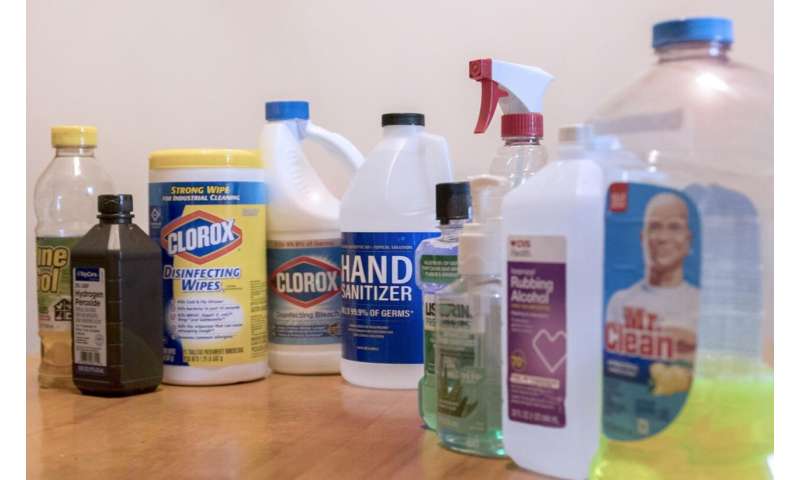 Cleaning products, alcohol-based sanitizers and other common chemicals are all being used on surfaces to try to kill the virus that causes COVID-19, but knowing how much to use and how long to use it for is unknown, according to Craig Meyers, distinguished professor of microbiology and immunology and obstetrics and gynecology, College of Medicine, Penn State, who is looking at testing these chemicals to find out.

There are currently little data indicating if the common products used in hospitals and other places to sanitize surfaces work, according to Meyers. “More importantly, the length of contact time needed is also unknown. It could be instantaneous, or it could take two minutes or more of contact,” he said.

Rapid-response seed grant funding from the Penn State Huck Institutes of the Life Sciences aimed at research across the University to address COVID-19, will allow Meyers and his team to test three groups of chemicals for their efficacy against a SARS-CoV-2 surrogate.

The team, consisting of Meyers; Rena Kass, associate professor of surgery and medicine; David Goldenberg, founding chair of otolaryngology—head and neck surgery and Steven and Sharon Baron Professor; Janice Milici, research technician in microbiology and immunology; and Samina Alam, research associate in microbiology and immunology, will test the substances against a human coronavirus that causes 10% of common colds. While not identical to the virus that causes COVID-19, it is an appropriate first step.

The first set of sanitizing agents will be those normally used in hospitals, homes and similar locations. These include 70, 75, 80 and 95% ethyl alcohol; 70, 75, 80 and 95% isopropyl alcohol: 0.525 and 0.0525% bleach; hypochlorous acid—a weak acid formed when salt water is electrified and used as a disinfectant in the food industry; and industrial disinfectants like Cidex OPA and Gluteraldehyde.

The researchers will use porcelain and ceramic tiles to mimic countertops and other kitchen and bathroom surfaces and old cell phones to mimic other common hard surfaces. They will test the disinfectants for various lengths of time from 30 seconds to two minutes.

The U.S. Food and Drug Administration requires that disinfectants leave no more than 1 virus per 10,000 viruses on a surface. Meyers would like to see a reduction to only 1 virus per million viruses already on the surface or to no virus at all.

“The FDA requires that we put some kind of soil on the surfaces,” said Meyers. “It is standard to use a protein like bovine serum albumin or something similar. This is to make sure that other contaminants on the surface don’t interfere with the disinfectant.”

The second set of materials the researchers will test consist of common throat and nose antiseptics, including peroxide, baby shampoo, povidone-iodine, and commercial mouthwashes.

“For the third set, we are going to focus more on what people already have at home,” said Meyers. “We know most of these products are hard to get in the stores right now, but people have them in their homes, many of them are old.”