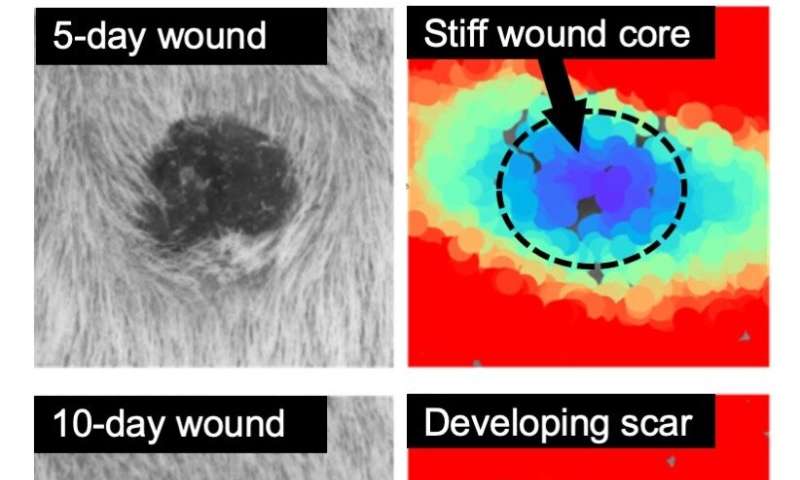 ETH researchers have deconstructed the mechanisms that control wound healing and scar formation in more detail. To this end, biologists and engineers have developed a new method that allows the biomechanical properties of the healing tissue to be measured in vivo for the first time.

Anyone who is injured hopes for a speedy recovery. But wounds that heal too quickly can heal badly: if the concentration of certain growth factors becomes too high and the healing process overshoots the mark, then bulging (in technical jargon: hypertrophic) scars form and even the surrounding skin loses some of its elasticity. This is the conclusion that Sabine Werner, at the Institute for Molecular Health Sciences, and Edoardo Mazza, at the Institute for Mechanical Systems, and their two research groups have reached following joint investigations.

As the researchers just reported in the journal Nature Communications, they have deconstructed the complex mechanisms that control the process of tissue repair and scar formation in more detail. Their current work, which was made possible by University Medicine Zurich’s flagship project Skintegrity, focuses on a signal molecule: activin. This molecule plays an important role both in healing wounds and in cancer. “We’ve shown how profoundly a single signal molecule affects the complex interaction between cells and their surroundings,” Werner says.

The greater the quantity of activin in the wound, the more connective tissue cells are generated. Higher activin concentrations also change the composition of what is known as the extracellular matrix, the scaffold surrounding the cells of the wound. In this scaffold, which is produced and remodelled by the cells, higher activin concentrations translate into greater accumulation of collagen, and the collagen fibres are also more strongly cross-linked with each other. While this promotes the speed of wound healing, it also causes the injured tissue to stiffen and harden.

During their interdisciplinary collaboration, the researchers learned a lot from each other, emphasise the two lead authors, molecular biologist Mateusz Wietecha and mechanical engineer Marco Pensalfini. While biochemical and bioinformatic analyses of the molecular processes in the wound gave the engineers a chance to expand their understanding of tissue mechanobiology, developing the new wound measurement technologies was new ground for the biologists. The result is a method for measuring the biomechanical properties of healing tissue in vivo for the first time.

This new method will permit early diagnosis and tracking of the tissue repair process over time—and the knowledge gained might even allow doctors to influence it, Werner says; how to influence healing will depend on the type and location of the injury. If a wound threatens to become chronic, it might be possible to perform an intervention to accelerate the healing process, for example by enriching the concentration of activin or of matrix proteins influenced by activin, she adds. When it comes to facial injuries, it would be prudent to slow down the healing process and thereby reduce scarring, for example by blocking activin signals. As things stand, however, applications like this are still a long way off. “Our interdisciplinary approach improves our understanding of healing processes and thus lays the foundation for future clinical applications,” Mazza says.

Toronto goes back into lockdown because of a surge in cases

Flu vaccine could slash risk of stroke by 23%, study suggests