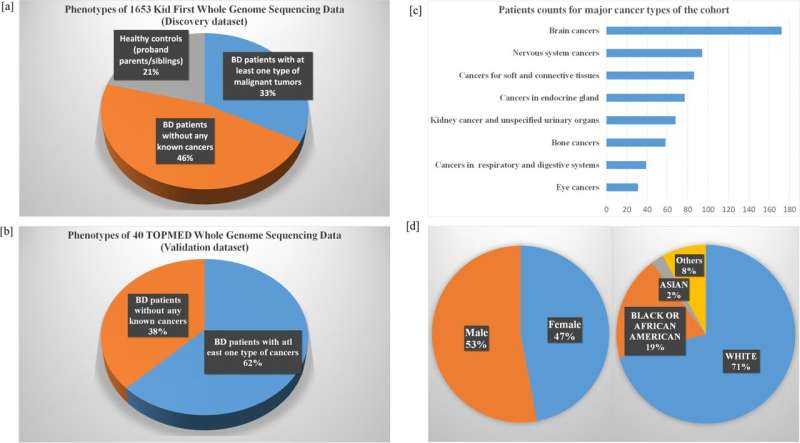 The findings were recently published in the journal Biomarker Research.

The underlying genetics of non-chromosomal birth defects have not been studied in great detail. Researchers at the Center for Applied Genomics (CAG) at CHOP wanted to determine which molecular mechanisms were at play and potentially identify genetic clues that could lead to early identification of cancer in these patients.

“We assembled one of the largest pediatric oncology and birth defects projects in children as part of the Gabriella Miller Kids First program project, which helps to uncover new insights into childhood cancer and structural birth defects,” said Hakon Hakonarson, MD, Ph.D., director of the CAG at CHOP and senior author of the study. “With this partnership, we sought to identify functional molecular pathways based on mutations we identified as part of this study.”

In this study, researchers used data obtained from whole genome sequencing of blood samples from 1,653 individuals without chromosomal abnormalities that were acquired from the Kids First Data Resource Center. These samples included 541 birth defect probands—the first person in a family to receive genetic counseling or testing for hereditary risk of a disease—with at least one type of malignant tumor, 767 birth defect probands without malignant tumors, and 345 healthy family members who are parents or siblings of the aforementioned probands. Additionally, once variants were identified, whole genome sequencing data from 40 birth defect probands from outside the data resource center, including 25 patients with at least one type of cancer, were used to further validate the study.

The study identified thousands of variants of interest, including 119 genes with at least two variants in coding regions—regions of the gene that will eventually be transcribed and translated into proteins to carry out essential functions—and 478 genes with at least 20 variants in their non-coding regions. Five genes in particular—AXIN2, BMP1, CR1, ERBB2, and RYR1—are associated with birth defects and increased risk of cancer. Additionally, the researchers built a deep learning model to assess the variants of interest identified in the Kids First cohort when compared with the 40 validation samples and found that they had achieved approximately 75% accuracy, with even greater accuracy for variants that were associated with non-coding regions.

Further detailed analysis of this data could identify genes and noncoding mutations that not only result in specific birth defects, but also identify which types of cancer they are more prone to and whether the risk is more pronounced in childhood or adulthood.