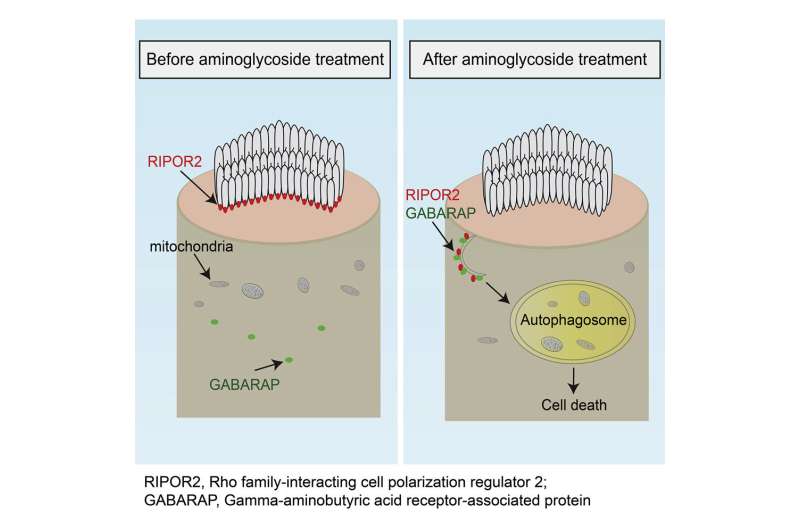 Researchers at Indiana University School of Medicine are developing new ways to study why an antibiotic causes hair cell death and permanent hearing loss in people.

In a study recently published in Developmental Cell, the researchers explained how they identified the autophagy pathway in hair cells that’s linked to permanent hearing loss brought about by aminoglycosides—a class of antibiotics. The researchers also developed one of the first laboratory models that’s insusceptible to aminoglycoside-induced hearing loss.

Ototoxicity—hearing loss caused by medication—is one of the main causes of hearing loss in humans. More than 48 million people in the United States experience trouble hearing.

Aminoglycosides for nearly a century have been used to treat severe infections. Although the drug is a first-line treatment for life-threatening infections—particularly in developing countries—due to their low cost and low incidence of antibiotic resistance, it has been reported to cause hair cell death and subsequent permanent hearing loss among 20–47% of patients, but the underlying mechanisms are not clear. Hair cells are responsible for sound reception in the inner ear.

Zhao, whose lab investigates the molecular mechanisms underlying hearing loss, used biochemical screening to identify proteins found in hair cells. They first discovered that aminoglycosides bound to the protein RIPOR2, which is required for auditory perception.

“As aminoglycosides specifically trigger a rapid localization change of RIPOR2 in hair cells, we hypothesize that RIPOR2 is essential for aminoglycoside-induced hair cell death,” Zhao said.

The researchers developed a model in the lab that has normal hearing but significantly decreased RIPOR2 expression. Through these experiments, Zhao said the model had neither significant hair cell death nor hearing loss after treatment of aminoglycosides.

“We then discovered RIPOR2 regulates the autophagy pathway in hair cells. Knowing this, we developed other laboratory models without the expression of several key autophagy proteins that did not exhibit hair cell death or hearing loss when treated with the antibiotic,” said Jinan Li, Ph.D., postdoctoral fellow in the Zhao lab and first author of the paper.

Here’s How to Correctly and Safely Wear a Face Mask, Plus How to Not Fog up Your Glasses