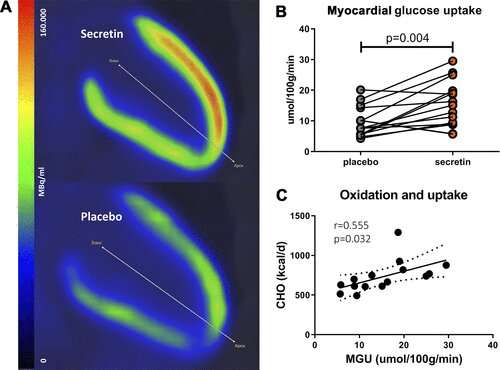 The gastrointestinal hormone secretin—often associated with its role in the pancreas—increases and improves both heart and kidney function, according to a new study. Researchers write that their findings make secretin “an interesting drug candidate for future studies in heart and kidney failure.” The study is published ahead of print in the American Journal of Physiology-Endocrinology and Metabolism. It was chosen as an APSselect article for January.

Heart failure occurs when the heart cannot pump enough blood to meet the body’s needs. Kidney failure, also known as end-stage renal disease, is when kidney function has degraded to the point that the patient requires dialysis or a transplant. According to the U.S. Centers for Disease Control and Prevention (CDC), roughly 6.2 million adults in the U.S. are living with heart failure and nearly 786,000 are being treated for kidney failure. As the researchers note, “renal failure exacerbates heart failure and vice versa.”

The gastrointestinal hormone secretin is best known for its role stimulating pancreatic secretion, which initiates the digestion of nutrients. However, interest has been growing in its potential effects on the heart. Receptors for secretin are present in various locations throughout the body, including both the heart and kidney.

A research team at the University of Turku, Finland, conducted a blinded crossover study in 15 healthy men. Each participant was scanned under fasting conditions via positron emission tomography and computed tomography on two separate occasions. One scan was conducted while administering intravenous secretin and the other intravenous saline, as a control.

The participants were also injected with glucose labeled with a radioisotope that allowed researchers to monitor how the glucose moved through the body. At different points throughout the interventions, they also took estimated glomerular filtration rates (eGFR), a common measure of kidney function.

“Based on the present findings, we believe that larger studies are warranted to investigate whether secretin may have a place in the future treatment of heart failure,” the team concluded.

From Protests to Parties: Why Gathering in Groups Is a Terrible Idea Right Now