The Golgi body (or Golgi complex, apparatus), and Endoplasmic reticulum (ER) are both organelles found in the majority of eukaryotic cells.  They are very closely associated and show both similarities and differences in structure and function. Some of these are as follows:

The Golgi body consists of stacks of flattened membrane-enclosed and fluid-filled saccules (cisternae). It is also associated with tubules continuous with the edges of the saccules and vesicles. Unlike the ER, the Golgi shows both structural and functional polarization. 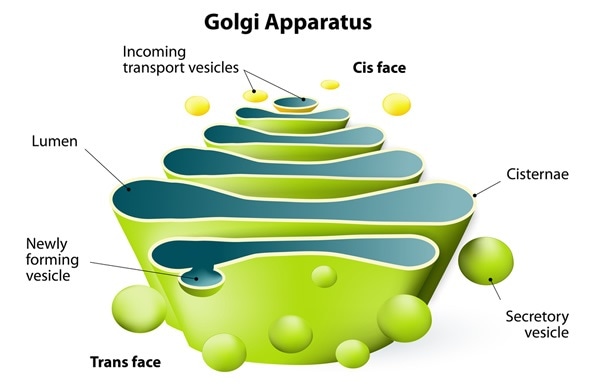 Golgi apparatus. Golgi Complex plays an important role in the modification and transport of proteins within the cell. Image Copyright: Designua / Shutterstock

It is not entirely understood how this is maintained however it seems to underlie the directional flow of materials from the cis (input) to the trans (output) cisternae amongst other forms of transport. It might also explain how the secretory vesicles form on the cis face of the Golgi and mature and dissociate from the trans face on the opposite side of the stack. 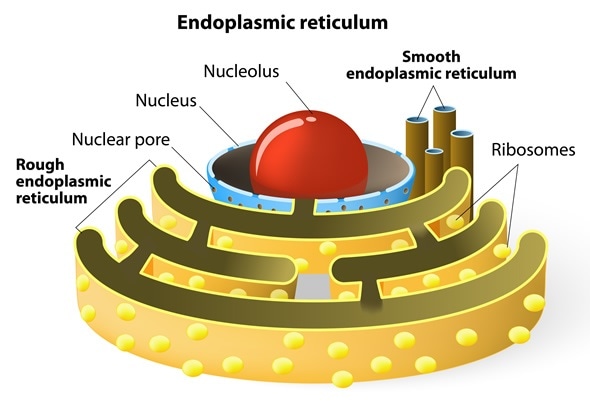 Endoplasmic reticulum is a continuous membrane, which is present in both plant cells, animal cells and absent in prokaryotic. Image Copyright: Designua / Shutterstock

Similarly, the ER comprises an extensive network of  membrane-enclosed sacs and tubules. It has such a physically wide reach that in most eukaryotic cells, it is the largest organelle.  It also has a much larger internal structure than the Golgi body to carry out its activities.

There are two distinct sub-compartments of the ER – the rough and the smooth ER.

The rough ER is characterized by fairly flat, sealed sacs which are studded with membrane-bound ribosomes on the outer surface (which is exposed to the cytosol).

In contrast, the smooth ER has a more tubular structure and does not have ribosomes on its surface hence its smooth appearance.

As the ER is composed of the distinct rough and smooth surfaces, the organelle has numerous diverse functions.

The rough ER is required for the folding and processing of membrane, transmembrane and secreted proteins. More specifically, chaperone proteins within the ER assist in folding polypeptide chains into their three-dimensional structures. Further modifications such as disulfide bridge formation or glycosylation may follow before the proteins undergo quality control then export to other sites such as the Golgi.

In contrast to the function of the rough ER, the smooth ER is important in the synthesis of membrane lipids or their precursors i.e. for glycerol phospholipids, ceramide and cholesterol.

Additionally, the smooth ER is involved in the metabolism of lipids via the production of steroid hormones (from cholesterol) and lipid-soluble compounds through its resident enzymes.

Some of these structurally appropriate lipids and glycoproteins are exported into the Golgi.

The Golgi has a similar but perhaps more extensive role than the ER – it is required for glycoprotein processing through the synthesis and subsequent addition of carbohydrate residues i.e. glycosylation. Glycoproteins which have been processed and imported from the ER may be subject to even further alteration in the Golgi.

Lipid metabolism also occurs in the Golgi. This involves using ceramide synthesized and imported from the ER to synthesize sphingomyelin and glycolipids.

Following the synthesis of these modified compounds, the Golgi sorts them into different kinds of transport vesicles to deliver their contents to their cellular destinations — either lysosomes, or the plasma membrane or are retained within the Golgi.

Lysosomes are membrane-bound organelles containing a repertoire of hydrolytic enzymes called acid hydrolases. These have the ability to digest intracellular macromolecules such as proteins, lipids and sugars.

The functioning of the Golgi apparatus and ER are both so closely linked to the lysosomes that together, these entities compose the endomembrane system. Interestingly, lysosomal formation relies on the joint contribution of the ER and Golgi.

The Golgi is responsible for the formation of lysosomes. When vesicles bud off from the trans-Golgi and fuse with endosomes, lysosomes are formed.

In contrast, the ER is where the lysosomal hydrolases are synthesized. Then they are transported to the Golgi, and are tagged for the lysosomes by the addition of mannose-6-phosphate label.

Part of the ER is continuous with the nuclear envelope of the cell. More specifically, the density of rough ER is higher near the nucleus and Golgi apparatus whilst the smooth ER seems to be located evenly throughout the cell.

On the other hand, the Golgi is not directly associated with the nucleus – instead, it is located in the cytosol of the cell in close proximity to the rough ER (therefore, also near the nucleus of the cell).

Deborah holds a B.Sc. degree in Chemistry from the University of Birmingham and a Postgraduate Diploma in Journalism qualification from Cardiff University. She enjoys writing about the latest innovations. Previously she has worked as an editor of scientific patent information, an education journalist and in communications for innovative healthcare, pharmaceutical and technology organisations. She also loves books and has run a book group for several years. Her enjoyment of fiction extends to writing her own stories for pleasure.

Premenopausal women have good long-term outcomes after a heart attack

New Zealand lays out vaccine plan after grumbling over delay

Dry January benefits: Taking a month off alcohol is the ‘secret’ to losing weight