CD38, or cyclic ADP ribose hydrolase, is a glycoprotein found on the surface of many immune cells. Binding of CD38 to its target ligand results in T cell co-stimulation, B cell maturation, and induction of cytokine production by several cell types. 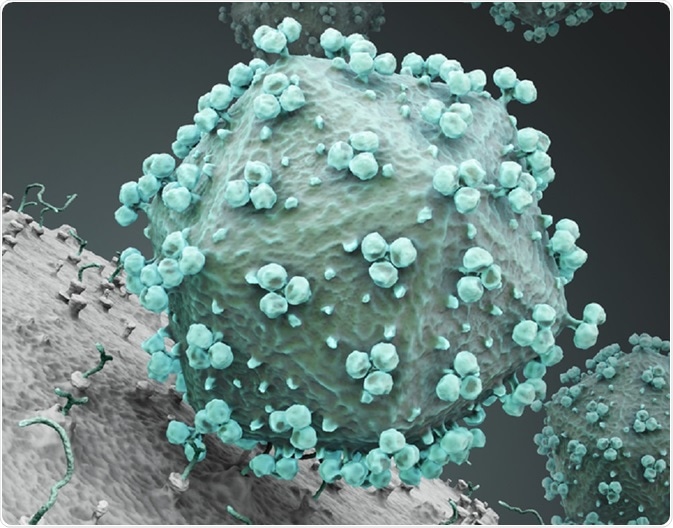 CD38 as a predictor of CD4+ T cell depletion

CD38 overexpression is a salient aspect of chronic HIV infection and predicts the onset of AIDS with high accuracy. Its expression is consistently predictive compared to other activation markers.

Additionally, it is independent of the frequency of cycling cells. This suggests that CD38 may reflect a mechanism that is independent of the viral-mediated killing of CD4+ T cells. Alternatively, CD38 may directly contribute to T cell loss, which would require an increase in biological activity to cause CD4+ T cell loss or decreased cell renewal. This would occur alongside the HIV-mediated cell lysis and cytopathic effects (changes in host cell structure mediated by viral invasion).

The overexpression of CD38 expression during HIV infection increases it's catalytic activity. CD38 is a potent regulator of nicotinamide adenine dinucleotide (NAD), which it uses as a substrate in catalytic reactions. This produces cADPR and ADPR, which mobilize Ca2+ and subsequently increase intracellular Ca2+concentration.

The increased Ca2+concentration, together with depleted NAD, reduce the function and integrity of mitochondria. Survival and proliferation of T cells (T cell viability) from HIV infected patients is consequently reduced.

The increase in NAD turnover results in excessive production of cADPR and ADPR. cADPR activates the ryanodine receptor (RyR) calcium channel, which increases the Ca2+ transport from the endoplasmic reticulum to the cytosol. The effect is enhanced by ADBR which activates transient receptor potential melastatin 2 calcium channel (TRPM2). TRPM2 permits Ca2+ entry from outside the cell to the cytoplasm.

Interestingly, CD38 operates outside of the cell so increases the intracellular concentrations of cADPR and ADPT, which suggests CD38 acts in an autocrine and paracrine manner. The ensuing increase in cytoplasmic Ca2+ further stresses the mitochondria which mediates the release of cytochrome c and programmed cell death.

CD38 as a pharmacological target

Hidaya is a science communications enthusiast who has recently graduated and is embarking on a career in the science and medical copywriting. She has a B.Sc. in Biochemistry from The University of Manchester. She is passionate about writing and is particularly interested in microbiology, immunology, and biochemistry.

Shemar Moore Shares the Workout He Loves to Hate