Is THIS why you can’t stop craving junk food? Just one week of unhealthy eating could ‘damage a part of the brain which normally stops us eating MORE even when we are full’

Eating a diet of junk food for just one week was enough to damage part of the brain that stops us eating more when we are already full, research suggests.

Study participants who ate an abundance of fast food and high-fat milkshakes had increased cravings for more after seven days.

They performed worse on cognitive tests, with results suggesting an area of the brain called the hippocampus was impaired.

The hippocampus normally stops us from gorging on more food when we are full by suppressing memories of how tasty it is.

When it’s not working properly, the memories are more powerful and we are left unable to resist more cake, chocolates and crisps in front of us, the researchers believe.

The discovery sheds light on why people reach for the biscuit tin out of habit – rather than due to being hungry – and why it’s so hard to get out a cycle of bad eating. 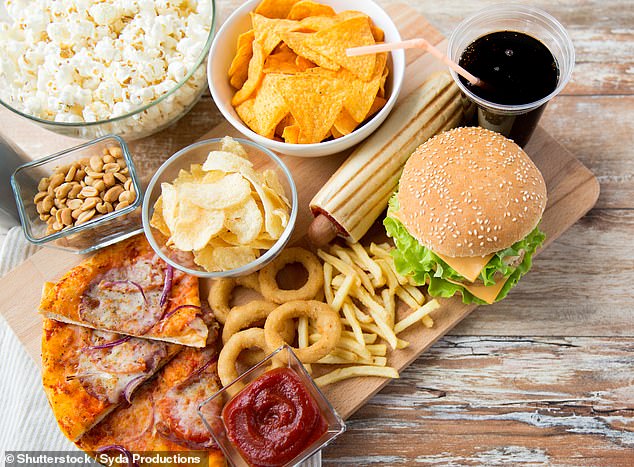 Eating a diet of junk food for just one week was enough to damage part of the brain that stops us eating more when we are already full, research suggests

Experiments on animals have shown poor diets rapidly mar the hippocampus – an area of grey matter that regulates memory and appetite.

Now the phenomenon has been demonstrated for the first time in humans.

Lead author Professor Richard Stevenson, of Macquarie University in Australia, said: ‘When we see cake, chocolate or crisps, for example, we remember how nice they are to eat.

‘When we are full the hippocampus normally suppresses these memories, reducing our desire to eat.

The Western diet is loosely defined as one full of fatty and sugary foods, such as burgers, fries and soda.

People often eat foods that are high in

Health effects have been linked to things such as hypertension, heart disease, diabetes, obesity, colorectal cancer and dementia.

He explained: ‘Junk food may then act to undermine self-control by increasing desire.’

In the study 110 male and female undergraduates from the campus were split into two groups – half of whom were randomly selected to gorge on a western style diet for seven days.

They began by receiving a laboratory breakfast of a toasted sandwich and a milk shake, high in saturated fat and added sugar.

Their daily diet then included waffles and a main meal, dessert and drink from a popular fast food restaurant amounting to an intake of more than 4,000 calories. They were handed cash to pay for it.

The others acted as a control, beginning with a breakfast of a toasted sandwich and a milk shake, low in saturated fat and added sugar. They continued on their normal diet.

Before and afterwards, the participants rated their liking and wanting of tasty sugary cereals such as Coco pops and Frosties in milk and snack foods like Vegemite and Nutella on toast.

Rankings went up among those who had been eating the junk food – even when presented with the images having been sated.

They also performed worse in memory and learning tests targeted to the hippocampus.

Interestingly, when these were repeated three weeks later after they returned to their regular eating pattern these abilities returned to normal – suggesting the damage can be reversed.

Because the damaged part of the brain is also involved in memory, researchers say it adds to evidence that an unhealthy diet raises the risk of Alzheimer’s disease.

Professor Stevenson, a food psychologist, said a number of studies have found the hippocampus is especially vulnerable to environmental risks – such as unhealthy diets.

He said: ‘It may be for this reason that a Western style diet – along with other factors – are known correlates of Alzheimer’s disease.

‘The current study suggests something similar occurs in humans, in that one week’s exposure causes a reduction in memory and learning performance, in addition to alterations in appetitive control, as measured by the wanting and liking test.’

The study, published in the Royal Society’s journal Open Science, follows research that found rats fed a diet containing 25 per cent sugar were thrown into a state of anxiety when it was removed.

Their symptoms included chattering teeth and the shakes – similar to those seen in people withdrawing from nicotine or morphine, said the US team.

Other studies in rodents have shown sweet foods stimulate opioids or ‘pleasure chemicals’ in the brain – suggesting people can become overly dependent on them.

Meals should be based on potatoes, bread, rice, pasta or other starchy carbohydrates, ideally wholegrain, according to the NHS

• Base meals on potatoes, bread, rice, pasta or other starchy carbohydrates, ideally wholegrain

• 30 grams of fibre a day: This is the same as eating all of the following: 5 portions of fruit and vegetables, 2 whole-wheat cereal biscuits, 2 thick slices of wholemeal bread and large baked potato with the skin on

• Eat some beans, pulses, fish, eggs, meat and other proteins (including 2 portions of fish every week, one of which should be oily)

• Choose unsaturated oils and spreads and consuming in small amounts

How Reopenings Are Raising Fears Among People with Compromised Immune Systems