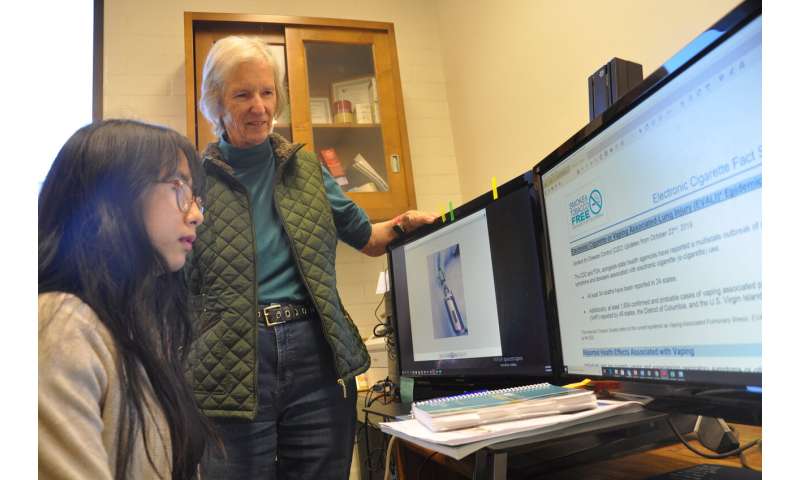 A team of researchers at the University of California, Riverside, used automated computer methods to mine a large online discussion forum for electronic cigarette users and found this group reported numerous adverse health effects for at least seven years.

The research, published in the Journal of Medical Internet Research, shows health problems associated with e-cigarettes existed well before summer 2019 when vaping-associated pulmonary illness, or VAPI, was recognized by the medical community. This development suggests many more e-cigarette users may have serious symptoms.

Recently, the Centers for Disease Control and Prevention, or CDC, linked VAPI to vitamin E. A number of VAPI cases are not, however, linked to the vitamin. VAPI is also referred to as EVALI, or e-cigarette or vaping product use-associated lung injury.

“The sudden uptick in symptoms and conditions related to VAPI comes at least 10 years after e-cigarette products gained widespread popularity in the United States, including the rise in popularity of JUUL and marijuana vape products,” said Prue Talbot, a professor of cell biology in the Department of Molecular, Cell, and Systems Biology, who led the research. “Our data, which shows many of the symptoms characterizing the current patients have been reported online for at least seven years, suggests cases similar to those in the current VAPI epidemic have existed previously and been unreported or simply not linked to vaping.”

The researchers collected data posted between January 2008 and July 2015 on a large e-cigarette online discussion forum. They designed a web crawler in Java to extract and parse information on symptoms and disorders from the forum. The crawler, programmed to focus on only those posts that belonged to seven health subforums, browsed through more than 41,000 posts, of which 45% were negative in sentiment, 38% were neutral, and 17% were positive.

The top five symptoms in the database were headache, coughing, pain in throat, itching, and malaise. The top five disorders in the dataset were dehydration, asthma, pharyngitis, common cold, and aptyalism.

E-cigarette research has shown some flavor chemicals can dilate blood vessels and cause headache, nausea, and fatigue. Prolonged inhalation of some flavor chemicals can cause headaches, dizziness, and/or respiratory symptoms. Metals identified in e-cigarette aerosols have been linked to neurological and respiratory symptoms. Nicotine, a major component in most e-cigarette fluids, can affect neurological, respiratory, digestive, mouth/throat, and circulatory systems. Nicotine inhalation can cause headaches, nausea, mouth/throat pain, cough, and heartburn.

“Our data underscore the idea that e-cigarette use is not free of adverse health effects and suggest that the epidemic we are seeing now will continue to grow given the many reports in the forum of symptoms characteristic of VAPI,” said My Hua, a graduate student in Talbot’s lab and first author of the research paper. “It is important that vigilant reporting of cases, tracking symptoms, and engaging in research on the health effects related to e-cigarette use be continued and expanded to understand and contain VAPI.”

The study is the first to use automated methods to analyze online posts uploaded over a seven-year period on an e-cigarette website and to identify the symptoms and disorders most frequently reported online by e-cigarette users.

“We used a modified version of the MetaMap medical information extraction tool, which has been shown to have high accuracy in extracting medical concepts like symptoms or disorders,” said Vagelis Hristidis, a professor of computer science and engineering and a co-author of the study. “It is possible that some posts mention a disorder in the wrong context, for example, making a joke about it, but from our manual screening of thousands of posts, this number of posts would be very small to meaningfully affect the results.”

Hristidis, an expert on data mining, explained the crawler mines data from each discussion thread in the e-cigarette forum and stores its content locally. A parsing tool then extracts the individual posts from the thread. Finally, a medical information extraction tool analyzes each post’s text and identifies mentions of symptoms or disorders.

“The symptoms and disorders we report in our study may be of interest to physicians and health care providers treating patients who use e-cigarettes,” Talbot said.