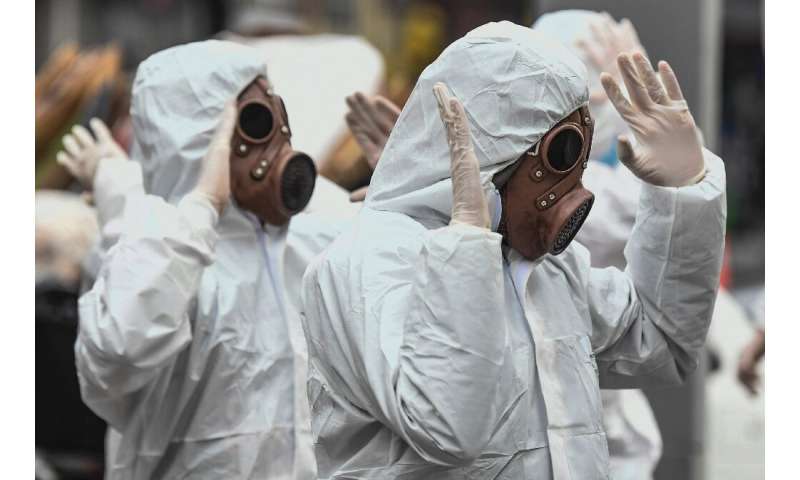 The world stepped up its war on coronavirus as deaths soared again in Europe on Thursday, despite a sign of hope from China where zero new domestic cases were reported for the first time.

Spain’s death toll jumped by almost a third overnight while Italy and France were set to extend the lockdowns that are keeping tens of millions of people trapped in their homes.

Countries around the globe have tightened border controls and unleashed nearly a trillion dollars to prop up the teetering world economy, only to see the once-in-a-century pandemic seemingly spiral further out of control.

Across the planet, the death toll from the virus whose main symptoms are a dry cough and fever has risen to over 9,000 with more than 217,000 infections reported, according to an AFP tally based on official sources.

One major milestone came in China which listed no new domestic infections for the first time since the outbreak first erupted in the central city of Wuhan in December, before spreading worldwide.

It appeared to have staunched the virus with strict measures including a complete quarantine of Wuhan since January, meaning the number of infections and deaths in the rest of the world have surpassed those in China.

But there were fears that Asia faces a second wave of cases imported from abroad, with 34 new cases reported in China Thursday, the highest figure for two weeks. 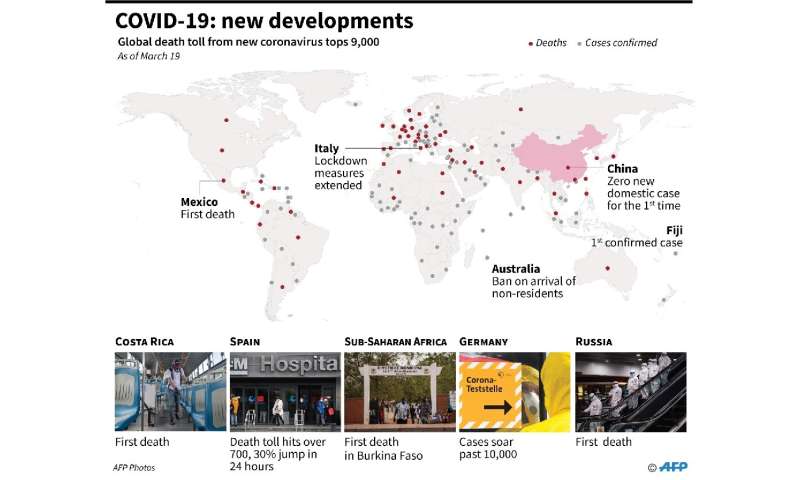 The pandemic is worsening elsewhere, with Italy appearing set to overtake China as the country where the most people are confirmed as having died from the COVID-19 disease.

Prime Minister Giuseppe Conte said Italy’s national lockdown, which has been copied around Europe, would be prolonged to April 3, shattering hopes of a quick end to the crisis.

“We will not be able to return immediately to life as it was before,” he said.

France also mooted extending the two-week lockdown ordered this week by President Emmanuel Macron, as the interior minister blasted “idiots” who flout home confinement rules and put others at risk.

Spain, where coronavirus deaths jumped by nearly 30 percent over the past 24 hours, is one of several countries that have begun requisitioning hotels for use as hospitals.

Hard-hit Iran also announced new fatalities and said it was granting early release to 10,000 prisoners to reduce numbers in jails. 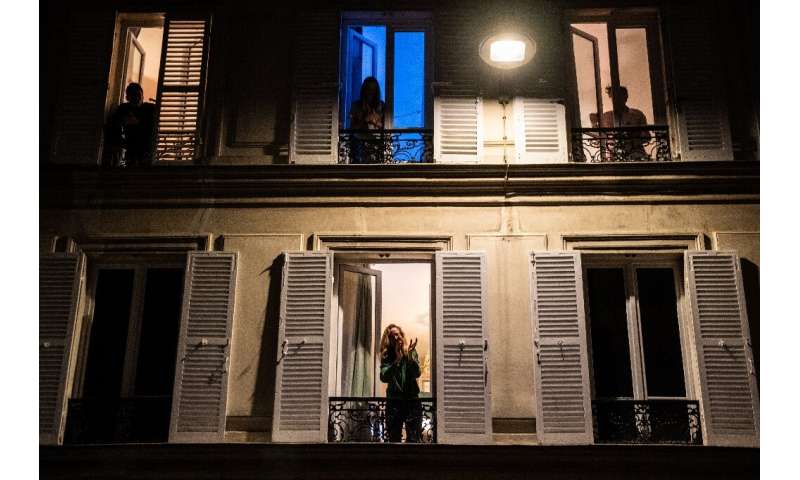 With countries paralysed by the pandemic and stock markets imploding, policymakers this week unleashed a wave of measures to shore up the global economy.

“Extraordinary times require extraordinary action. There are no limits to our commitment to the euro,” ECB chief Christine Lagarde said.

US President Donald Trump signed a $100 billion emergency aid package to provide free coronavirus testing for those who need it, sick pay and paid family leave.

Trump said he viewed himself as a “wartime president”, even as his administration faced growing criticism over a lack of testing for coronavirus and for the speed of its response.

The US has so far shied away from the sweeping restrictions used in China and many European countries, although the streets of many of its major cities have emptied as local curbs come into effect. 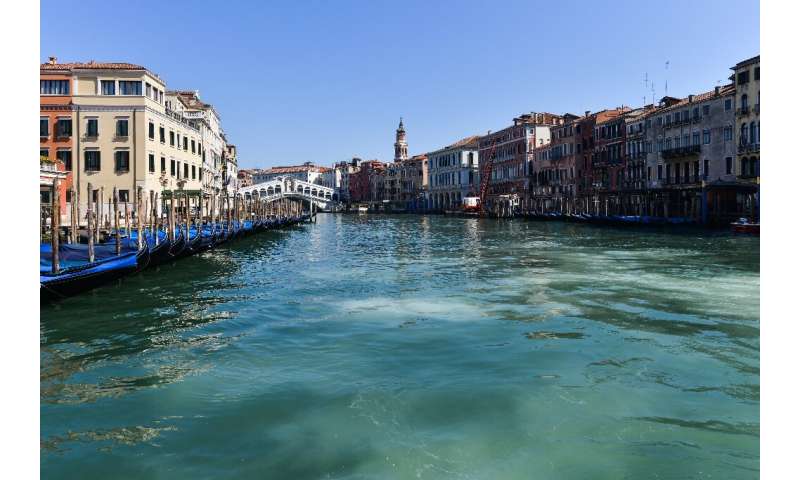 European and US stocks staged a rebound on the stimulus news, although Asian markets took another beating.

But the sense of impending doom continues to cast a pall over the world economy with airlines, carmakers and others all warning of bleak times ahead.

The battle is only just beginning across the rest of the world, with the shadow of the virus lengthening across Africa.

The Nigerian mega-city of Lagos announced it would shut its schools while Burkina Faso confirmed the first death in sub-Saharan Africa.

Russia reported its first death and even the Pacific nation of Fiji said it had its first case.

The UN warned meanwhile that as nations bring in shutdowns and travel bans, some three billion people lack even the most basic weapons to protect themselves from the virus: soap and running water. 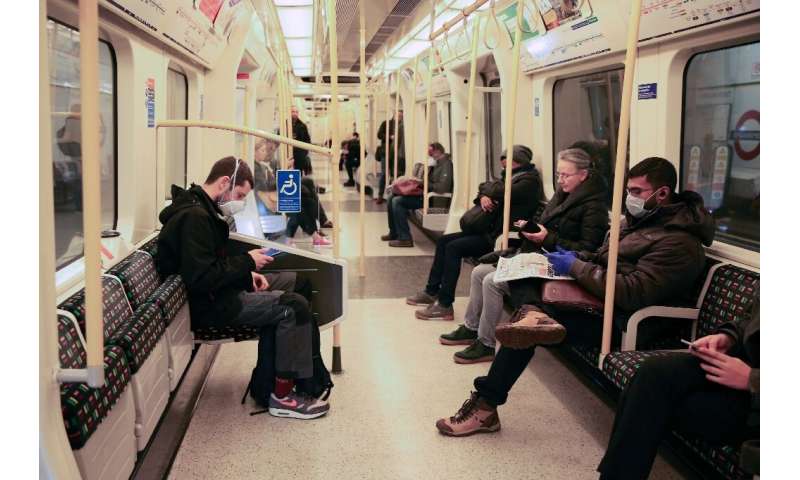 World Health Organization head Tedros Adhanom Ghebreyesus urged countries to “come together as one against a common enemy: an enemy against humanity”.

Britain, where Prime Minister Boris Johnson had initially chosen a different path, closed dozens of London Underground stations and shut down schools, although his government denied reports it was about to lock down the capital.

While the EU has closed its borders to outsiders, in many countries bars, restaurants and most shops have closed their doors until further notice, bringing life in Europe’s normally bustling cities to a halt.

The virus also continues to hit sports and cultural events, with Greece handing over the Olympic flame to Tokyo 2020 organisers at a ceremony held behind closed doors amid calls for the games to be postponed.

English football also extended its shutdown until at least April 30. 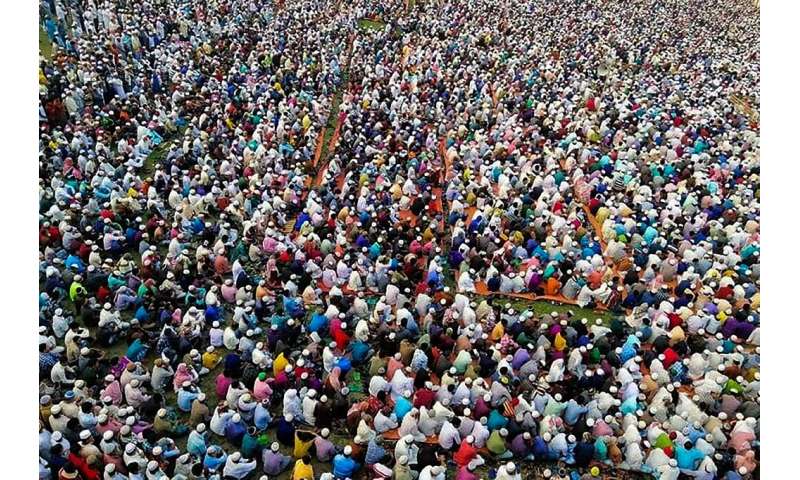 As others stockpiled toilet paper and pasta, the French are thronging bakeries for their famed baguettes.