BREAKING: Wuhan evacuee in Texas becomes the 15th American with coronavirus as the CDC says it’s preparing for the infection to ‘take a foothold in the US’

A fifteenth American has coronavirus, US officials announced Thursday.

The latest patient is among the evacuees from Wuhan being held in quarantine at JBSA-Lackland and is the first confirmed case in Texas.

The US is bracing for the new coronavirus that has now struck 60,000 people worldwide to spread in the US, officials said the previous day.

Wednesday night, the Centers for Disease Control and Prevention (CDC) confirmed a fourteenth American had tested positive for the infection, now known as COVID-19.

CDC’s director of the Center for the National Center for Immunization and Respiratory Diseases, Dr Nancy Messonnier said that the CDC is preparing for coronavirus to ‘take a foothold in the US.’

‘At some point, we’re likely to see community spread in the US.’

So far, there have been just two known cases of human-to-human transmission in the US but, after hopeful signs the outbreak might be subsiding, China Thursday reported a huge surge of more than 14,000 new cases and more than 240 deaths.

But if it does begin to spread, Dr Messonnier said ‘this will trigger a change in our response strategy,’ but did not elaborate on what tactics they would employ. 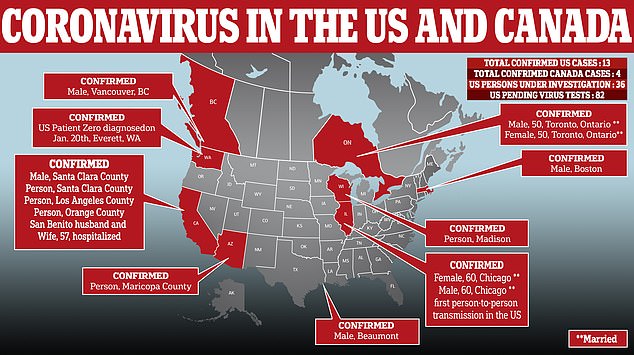 ‘There will likely be additional cases in the coming days and weeks, including among other people recently returned from Wuhan,’ the CDC said in its Thursday statement on the latest case of coronavirus.

‘While 195 people were discharged from quarantine on Tuesday, more than 600 people who returned on chartered flights from Wuhan remain under federal quarantine and are being closely monitored to contain the spread of the virus.’

Those quarantined patients are being held at military bases in California and Nebraska, as well as Lackland, in Texas, where the newest patient was diagnosed.

Yesterday, Dr Messonnier said: ‘Chinese cases are dropping down, so we’re optimistic that their aggressive methods are effective, but it’s too soon to say.’

But the Chinese have adapted their testing method and the switch seems to have unveiled that far more people are sick.

CDC distributed its test for coronavirus to more than 100 labs across the US, and as many worldwide last week.

On the heels of the test release, officials predicted an uptick in the number of diagnoses in the US.

However, yesterday Dr Messonnier revealed that some tests are flawed, returning ‘inconsistent’ results in quality assurance testing, rather than clear positives or negatives.

As a result, the CDC is re-manufacturing the component they believe to be at fault for the imperfect testing and will redistribute the test component.

The test will then be employed on people who develop symptoms as well as anyone returning from China’s Hubei province and anyone who develop the primary symptoms: fever, cough, shortness of breath.

Tuesday, 195 passengers from the first evacuation flight out of Wuhan, the epicenter of the outbreak in China, were released from their 14-day quarantine in California.

They had all tested negative for the virus, multiple times over the course of their time on March Air Reserve near Riverside, California.

But, the same day, the CDC confirmed that there was a thirteenth coronavirus patient in the US, a woman who had also been evacuated from Wuhan, on one of the last two flights.

She’d originally been dismissed as negative for the disease, but when her sample was actually run and came up positive, the woman was transported back to the hospital.

Then, Wednesday night, a fourteenth patient was confirmed. The person is yet another evacuee, also arriving last Thursday in California, but they were on a separate flight from the one that the thirteenth patient had taken.

The patients did not infect one another, and fewer people who have been in China are now coming back to the US.

‘Since airport screening began in mid-January we have screened more than 30,000 passengers. Fewer and fewer are coming in from China, especially from Hubei,’ said Dr Messonnier.

‘Mostly, they are coming in from mainland China, have no symptoms and are not high risk.’

Beware of false negatives in diagnostic testing of COVID-19